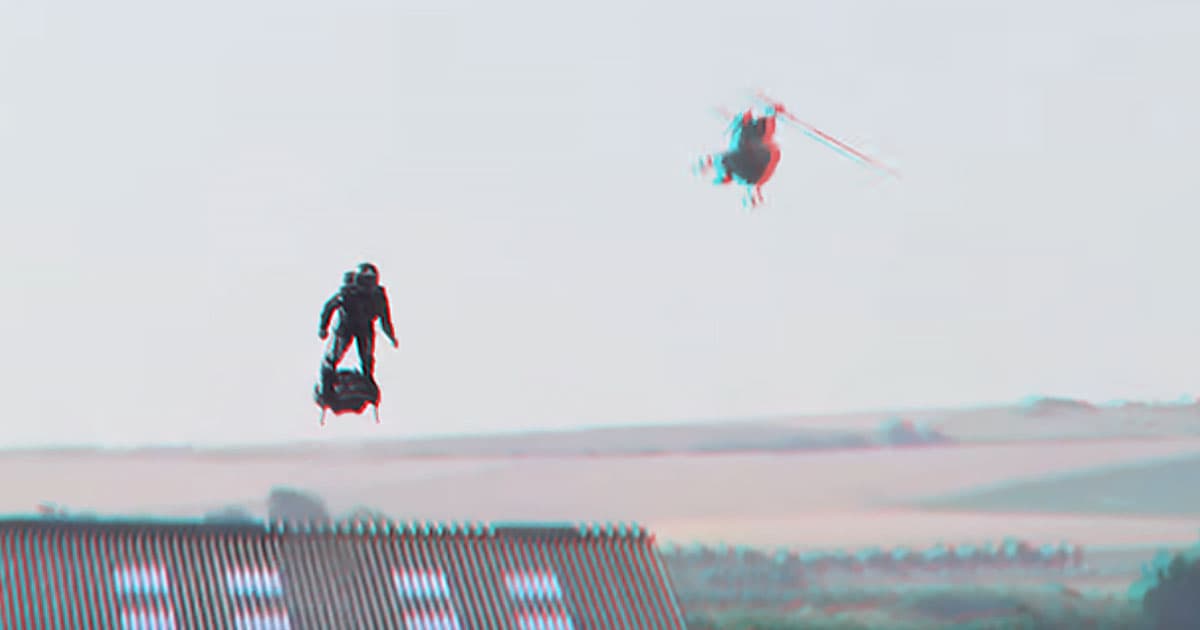 "I lost balance, I fell in the water."

"I lost balance, I fell in the water."

Franky Zapata's attempt to make history on Thursday ended with a splash.

Earlier in July, the former jet-ski champion made waves when he flew over Paris' Bastille Day parade on a hoverboard of his own invention.

His next big stunt was supposed to be a hoverboard flight across the English Channel on the 110th anniversary of French inventor Louis Blériot's history-making cross-Channel flight in an airplane.

Zapata recently told The Guardian he thought he had about a 30 percent chance of success. As it turned out, he wasn't able to beat those odds — he fell into the water while trying to land on a boat to refuel about 11 miles from his destination.

"When I got closer to the platform, the boat took a wave and it hit the foot of the machine and broke it," Zapata said during a follow-up press conference, according to CNN, later adding, "I lost balance, I fell in the water. The flyboard is damaged, the electronic part has to be redone, the motors are ruined but the base is saved."

Zapata wasn't hurt by the fall, and it isn't deterring him from getting right back on the, er, hoverboard — during the press conference he said he hopes to attempt the cross-Channel flight again, perhaps "as soon as next week."

More on the hoverboard: Inventor Set to Fly Across the English Channel on His Hoverboard

Nyoom!
We Talked to the Guy Who Flies Around on a Giant Drone That He Built Himself
7. 6. 21
Read More
Drawing the Line
Satellite Images Show Progress on 100-Mile Long Skyscraper in Saudi Arabia
8:00 PM
Read More
ChatGPT Racism
ChatGPT's Recommendations for Airport Security Are Shockingly Racist
7:00 PM
Read More
+Social+Newsletter
TopicsAbout UsContact Us
Copyright ©, Camden Media Inc All Rights Reserved. See our User Agreement, Privacy Policy and Data Use Policy. The material on this site may not be reproduced, distributed, transmitted, cached or otherwise used, except with prior written permission of Futurism. Articles may contain affiliate links which enable us to share in the revenue of any purchases made.
Fonts by Typekit and Monotype.