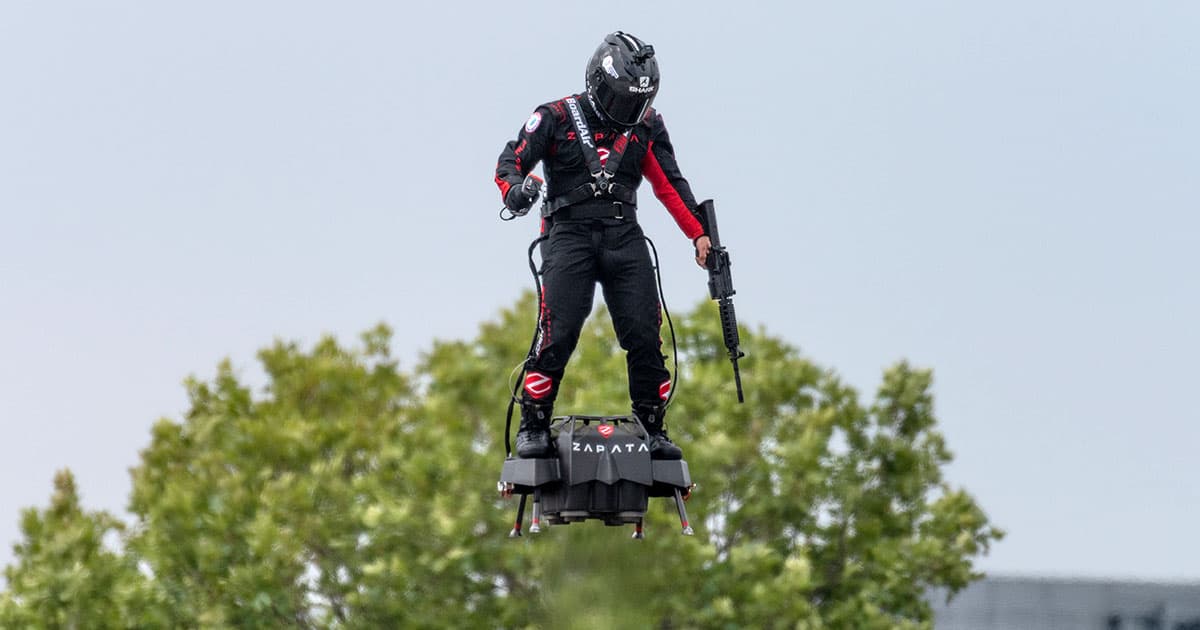 Inventor Set to Fly Across the English Channel on His Hoverboard

"I reckon I’ve a 30 percent chance of succeeding."

"I reckon I’ve a 30 percent chance of succeeding."

Exactly 110 years ago this Thursday, French inventor Louis Blériot became the first person to fly an airplane across the English Channel, the body of water separating the United Kingdom and France.

To honor the achievement, another French inventor plans to make his own cross-Channel trip this week — but he'll attempt to do so while riding a flying hoverboard that looks strangely similar to the one used by Spider-Man villain the Green Goblin.

Pushed to the Limit

That was an attention-grabbing stunt, for sure, but according to Zapata, it was nowhere near as difficult as the upcoming Channel crossing will be.

"I used 3 percent of the machine’s capabilities, and I’ll need 99 percent for the Channel," he told The Guardian. "It won’t be easy at all, and I reckon I’ve a 30 percent chance of succeeding."

As it currently stands, Zapata will take off from Sangatte, France, and land 35 kilometers (21 miles) away at St Margaret’s Bay in the U.K. The whole trip should take about 20 minutes, with the hoverboard reaching a potential top speed of 140 kilometers per hour (86.9 miles per hour).

Zapata will need to stop halfway to refuel, but he hasn't decided whether he'll do so by landing on a ship or hovering above it. Hovering is the riskier proposition, but it would allow him to claim a continuous flight — just like the one Blériot made 110 years prior.

More on the hoverboard: Someone Carrying a Rifle Just Flew Over Paris on a Hoverboard

Nyoom!
We Talked to the Guy Who Flies Around on a Giant Drone That He Built Himself
7. 6. 21
Read More
Robot Ridicule
Hilarious Video Shows Boston Dynamics Robot Failing Horribly
Yesterday
Read More
Rock Battery
Researchers Successfully Turn Abandoned Oil Well Into Giant Geothermal Battery
Yesterday
Read More
+Social+Newsletter
TopicsAbout UsContact Us
Copyright ©, Camden Media Inc All Rights Reserved. See our User Agreement, Privacy Policy and Data Use Policy. The material on this site may not be reproduced, distributed, transmitted, cached or otherwise used, except with prior written permission of Futurism. Articles may contain affiliate links which enable us to share in the revenue of any purchases made.
Fonts by Typekit and Monotype.