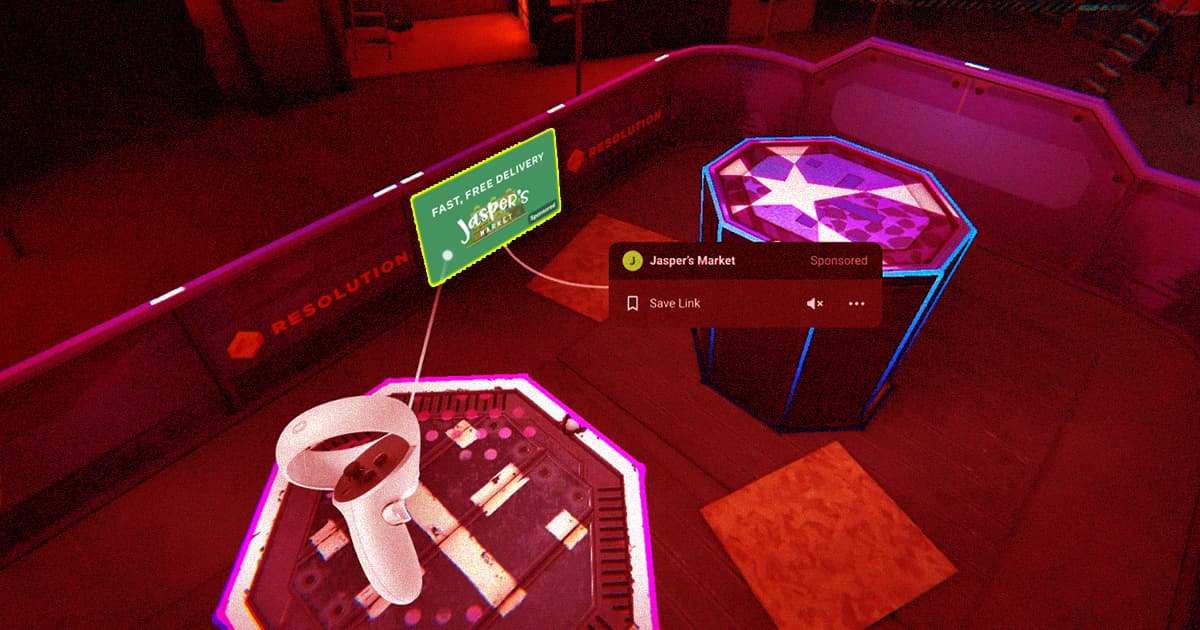 VR advertising is upon us, and right in your face.

VR advertising is upon us, and right in your face.

Facebook is starting to squeeze ads into the magical virtual reality environments enabled by its Oculus Quest VR headset — a move that shouldn't come as a surprise to anybody who's noticed Facebook's approach to innovation.

In other words, the dystopian nightmare future of having ads pop up inside magical virtual worlds, unavoidably, right in your face? It's already upon us. The company however is hailing the change as an easy way for developers (read: Facebook) to squeeze more money out of their VR games and apps.

In a test, the social media platform chose to include display ads inside a first-person shooter arcade game developed by Resolution Games. It's using first-party data to make sure the ads are relevant — but arguably, no matter how relevant, the decision only comes to the demise of those who have already invested in the Quest platform.

Those consumers will also have to suck it up or invest in a different platform. In fact, in order to actually make use of Facebook's $299 Oculus Quest 2, users are forced to sign in with Facebook.

The Mark Zuckerberg-led company is trying to sell off the ad idea as a way to make VR a "self-sustaining platform" by allowing developers to generate revenue. "It also helps us continue to make innovative AR/VR hardware more accessible to more people," a polished-by-the-PR-team blog update by the Oculus team reads.

"For now, this is a test with a few apps," the post reads. If all goes well, Oculus is ready to roll out apps "across the Oculus Platform and in the Oculus mobile app, as well as guidance for businesses and developers interested in advertising on Oculus."

Facebook is taking a privacy-first approach and is promising to "not use information processed and stored locally on your headset to target ads."

The social media company is also reportedly working on a smartwatch, and has announced it is building a pair of AR glasses. It's still unclear if those platforms will also eventually be flooded with ads — but it wouldn't exactly be a surprise.

We're still not entirely sure what form the VR ads will take. Facebook is trying out "new ad formats that are unique to VR," but didn't specify what that would look like, as The Verge points out.

Either way, the move to include ads won't come as a welcome addition to literally anybody playing games or using apps in VR right now.