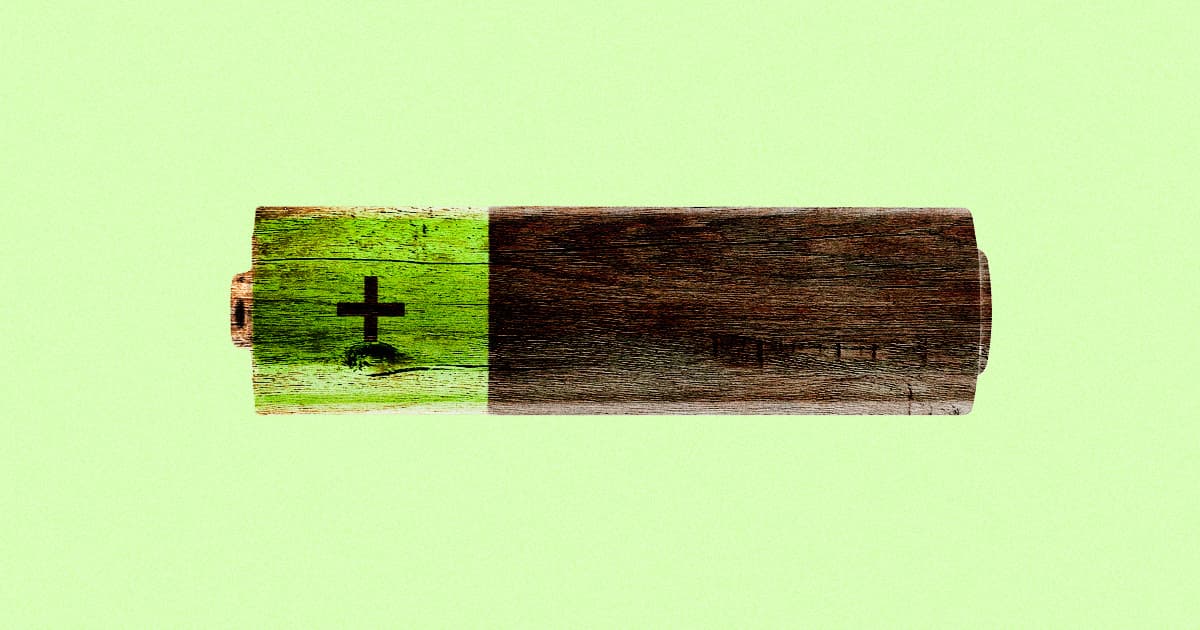 Wood You Believe It?

Put those leftovers to use!

Put those leftovers to use!

As the transition to electric vehicles starts to feel inevitable, the demand for batteries continues to soar. But even though EVs are touted as more environmentally friendly, both sourcing and disposing of the materials used in their batteries has rightfully raised questions over sustainability.

Now, the BBC reports that Finnish pulp and paper manufacturer Stora Enso — one of the world's largest owners of private forest — has hired engineers to explore a tantalizing solution: using a polymer found in trees, called lignin, as a crucial battery ingredient.

Most batteries contain electrodes known as cathodes and anodes, which facilitate the flow of charged particles called ions. These ions are more or less stored in the anode when a battery is charged, and are released through the cathode when the battery is discharged to supply power. Because lignin contains carbon, it could potentially be used to form the anode of a battery, replacing materials like graphite that are currently in common use.

According to the BBC, manufacturing synthetic graphite currently requires heating carbon at up to nearly 5,500 degrees Fahrenheit for weeks at a time — a very energy intensive process.

Instead, what Stora Enso's so-called "Lignode" solution possibly offers is using the lignin recovered from the waste pulp that's produced while making paper and wood products.

One upside is that this approach, in theory, wouldn't require additional trees to be cut down — a boon, so long as the company's forestry practices are as one-hundred-percent sustainable as it purports them to be.

But better yet, Lignode head Lauri Lehtonen claims that heating the lignin into a carbon structure like graphite requires far lower temperatures than graphite itself, saving energy in the process.

Even if lignin is everything Stora Enso makes it out to be, it may have trouble competing with the graphite that's already used, because graphite is simply too good at what it does.

"I just don't think it's going to be a big enough step-change in terms of cost or performance to replace the entrenched graphite," Wyatt Tenhaeff, a professor of chemical engineering at the University of Rochester who's experimented with anodes made from lignin, told the BBC.

Still, Tenhaeff thinks lignin is "really cool" and found that it could indeed be used to make anodes at a potentially lower cost.

More on batteries: Startup Says It's Building a Giant CO2 Battery in the United States

Doc Ock Was Here
A White-Hot Molten Silicon "Sun" Could Power 100,000 Homes
12. 7. 18
Read More
What's A Proton Battery? Three Things You Need To Know.
3. 11. 18
Read More
Experts: Batteries Will Meet Increasing Energy Storage Needs In 5 Years
10. 23. 17
Read More
+Social+Newsletter
TopicsAbout UsContact Us
Copyright ©, Camden Media Inc All Rights Reserved. See our User Agreement, Privacy Policy and Data Use Policy. The material on this site may not be reproduced, distributed, transmitted, cached or otherwise used, except with prior written permission of Futurism. Articles may contain affiliate links which enable us to share in the revenue of any purchases made.
Fonts by Typekit and Monotype.