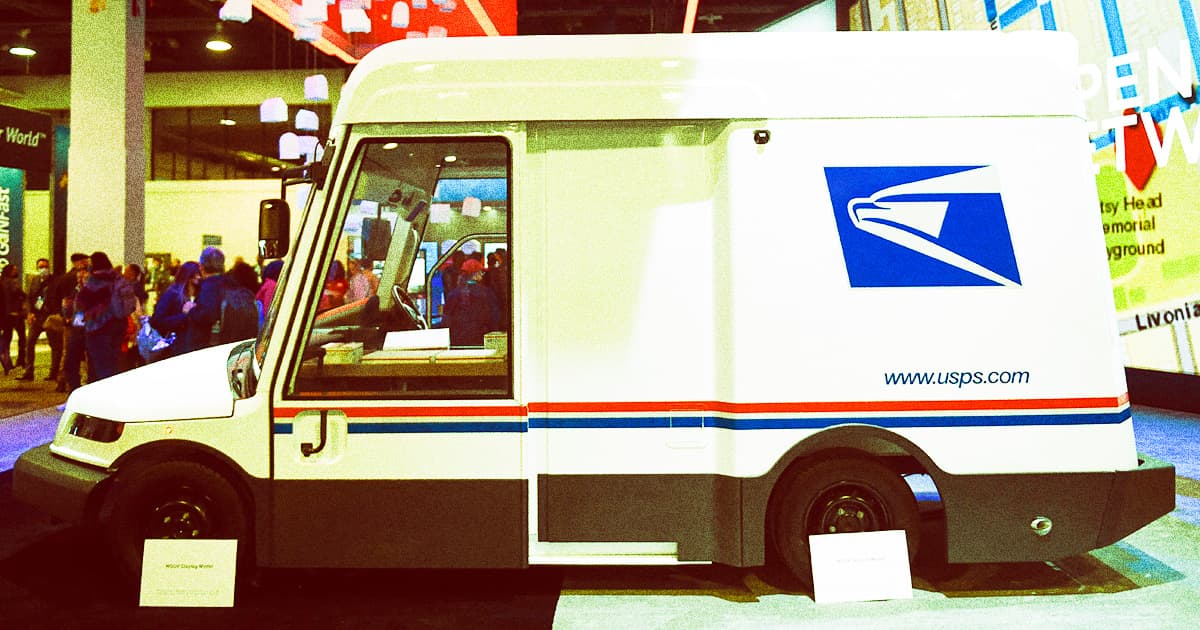 US Postal Service Buying 66,000 Electric Vehicles, Plans to Only Buy EVs By 2026

"Finally we're seeing the common-sense decision to move the government's largest fleet of vehicles to all-electric, a massive win for climate and public health."

"Finally we're seeing the common-sense decision to move the government's largest fleet of vehicles to all-electric, a massive win for climate and public health."

The US's largest fleet of civilian vehicles is going electric.

The United States Postal Service announced this week that it'll be adding at least 66,000 electric vehicles to its aging fleet of some 220,000, according to an agency press release.

With the massive boost of $3 billion in funds from the Biden administration's Inflation Reduction Act, the USPS says it plans to spend a total of around $9.6 billion in upgrading its fleet and building charging stations — a massive investment from an agency that's chronically in dire need of money and is rarely willing  to splash any cash.

The prime candidate for replacing its iconic-but-horribly-inefficient Grumman LLV delivery trucks is the "Next Generation Delivery Vehicle" (NGDV) manufactured by defense contractor Oshkosh. The USPS anticipates buying a minimum of 60,000 NGDVs, with at least 45,000 of them being electric, by 2028. In addition, the USPS will bolster its ranks with another 21,000 commercial-off-the-shelf-vehicles — vehicles that are readily available from automakers like Ford — all of which it hopes to be electric, depending on availability.

Most strikingly: while those plans do include buying some gas-powered vehicles in the interim, the USPS says that its vehicle purchases will be fully electric by 2026.

The move marks a significant shift in policy compared to even just last year, when the USPS announced that it only planned for around ten percent of its NGDV purchases to be electric, Ars Technica notes. The gas powered NGDVs ran at a pitiful 8.6 miles per gallon — barely an upgrade to the Grummans' 8.2 miles per gallon.

But with pressure from the Environmental Protection Agency, the Sierra Club, an executive order to electrify federal vehicles, and the Biden administration pushing back against its previous plans, the USPS has finally changed its tune.

"Finally we're seeing the common-sense decision to move the government's largest fleet of vehicles to all-electric, a massive win for climate and public health," said Katherine García, director of the Sierra Club's Clean Transportation for All campaign, in a statement.

Mailworkers will likely be happy with the decision, too, since the NGDVs — in addition to not being outdated in general — will come equipped with some much needed air-conditioning and much needed safety features like airbags.

LIDARally
Volvo's New Electric Car Won't Drive if It Detects That You're Drunk
9. 23. 22
Read More
Charged Up
Startup Says Amazing New Battery Lets EVs Drive 400 Miles, Recharge in 15 Minutes
6. 22. 22
Read More
Real American eMuscle
Dodge Says It's Only Making an Electric Car Because the Performance Is So Good
7. 8. 21
Read More
+Social+Newsletter
TopicsAbout UsContact Us
Copyright ©, Camden Media Inc All Rights Reserved. See our User Agreement, Privacy Policy and Data Use Policy. The material on this site may not be reproduced, distributed, transmitted, cached or otherwise used, except with prior written permission of Futurism. Articles may contain affiliate links which enable us to share in the revenue of any purchases made.
Fonts by Typekit and Monotype.