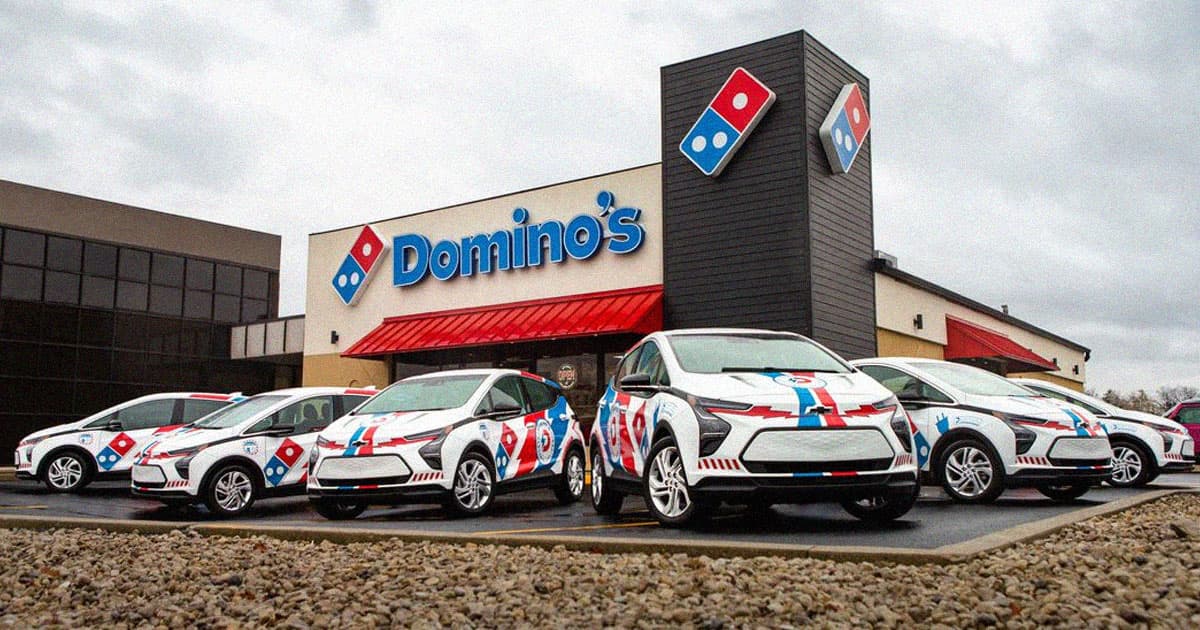 "We've got a long way to go, but we will have the biggest fleet of electric vehicles in the pizza industry, period."

"We've got a long way to go, but we will have the biggest fleet of electric vehicles in the pizza industry, period."

In a bid to bolster its understaffed workforce of drivers, Domino's Pizza is splashing cash on a fleet of 800 electric Chevrolet Bolts, painted in Domino's livery.

As the largest pizza chain in the world, Domino's investment in EVs marks a particularly high profile adoption by the fast food industry of electric transportation.

"We've got a long way to go, but we will have the biggest fleet of electric vehicles in the pizza industry, period," Domino's CEO Russell Weiner told Wall Street Journal in an interview.

After being hit with reports from location owners that they couldn't hire new delivery drivers because owning a car, especially in this economy, proved too high a barrier of entry, Domino's decided that providing vehicles was the way to help solve that problem.

Key to the Chevy EVs decision is their purportedly lower maintenance costs. While money will have to be invested in installing chargers at some Domino's locations, the pie peddlers are confident that that cost will be offset by the money saved on gas and maintenance.

The move is also a bold pivot away from using gig economy apps like DoorDash and GrubHub for delivery services, which many penny-pinching food chains — including direct competitors like Papa John's and Pizza Hut — have been relying on, especially during the COVID-19 pandemic.

In addition to being a useful recruitment tool, the branded Chevy Bolts will help Domino's meet its carbon-dioxide commitments.

"Domino's has always been on the cutting edge of pizza delivery and electric delivery cars make sense as vehicle technology continues to evolve," Weiner said in the interview. "We've made a commitment to net-zero carbon emissions by 2050, and this is one way we can begin reducing our environmental impact, one delivery at a time."

Acquiring this massive fleet of EVs, which are expected to start rolling out in the US this month, will serve as an interesting test on the feasibility of EV projects from similar brands, as well as a potential staging ground in a push-back against gig labor.

LIDARally
Volvo's New Electric Car Won't Drive if It Detects That You're Drunk
9. 23. 22
Read More
Charged Up
Startup Says Amazing New Battery Lets EVs Drive 400 Miles, Recharge in 15 Minutes
6. 22. 22
Read More
Real American eMuscle
Dodge Says It's Only Making an Electric Car Because the Performance Is So Good
7. 8. 21
Read More
+Social+Newsletter
TopicsAbout UsContact Us
Copyright ©, Camden Media Inc All Rights Reserved. See our User Agreement, Privacy Policy and Data Use Policy. The material on this site may not be reproduced, distributed, transmitted, cached or otherwise used, except with prior written permission of Futurism. Articles may contain affiliate links which enable us to share in the revenue of any purchases made.
Fonts by Typekit and Monotype.