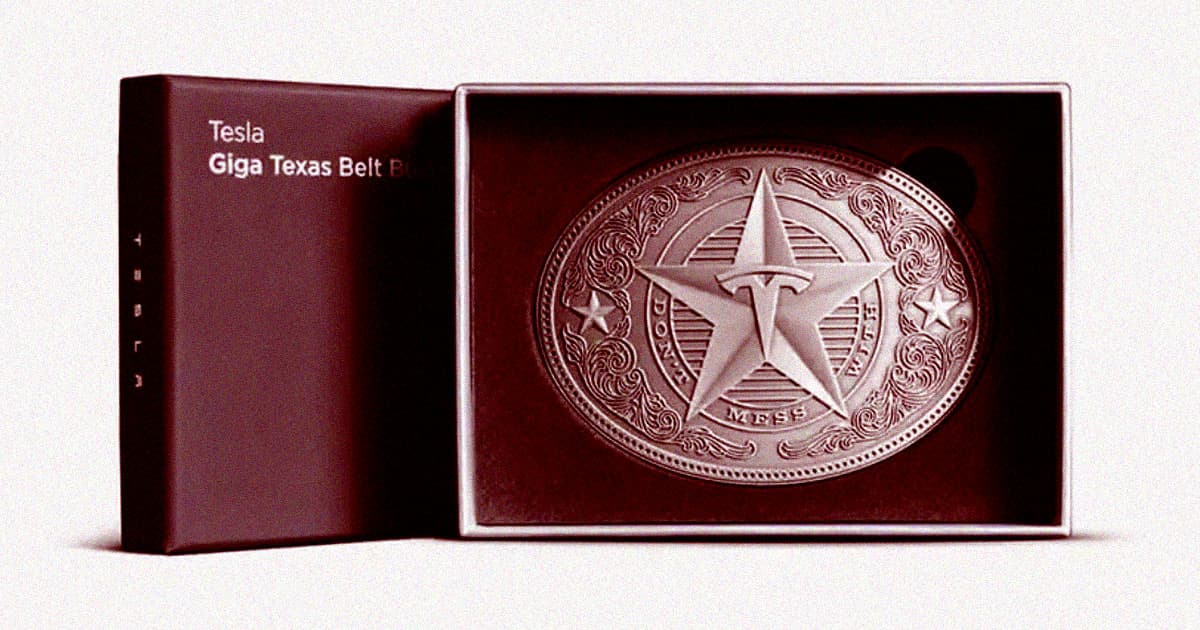 Moves to Texas one time.

Moves to Texas one time.

The latest cringe Tesla accessory is here, and boy is it a doozy.

Launched just in time for Christmas and priced "inexpensively" at $150, the first run of the Tesla Giga Texas belt — yes, that's really the product's name — sold out within a day and is already being resold, at a loss for $100 and under, on sites like StockX.

Emblazoned with the words "Don't mess with" — an homage to Tesla's new home in the Lone Star state and its slogan "don't mess with Texas" in which fans are apparently supposed to replace "Texas" with "Tesla" — the buckle is, per the company's website, "manufactured from die cast zinc, engraved and then brushed with an antique silver finish."

Arriving in the kind of sleek steel grey box that you'd expect to find an iPhone inside, the buckle, as our friends over at Input so aptly explained, is ironic given that these kinds of accessories are generally awarded to rodeo stars for achievements of physical strength like bull riding or calf-roping — successes that fly in the face of Tesla CEO Elon Musk's recent track record.

After publishing its hilarious takedown of the buckle, which is sure to piss off real cowboys the world over, Input received some reader mail that's, well, indicative of how Tesla fanboys emote online:

The belt buckle has been restocked, so if you feel like donating to Musk's personal wealth fund directly, you can buy one at full retail — or get one at a discount from savvy resellers, if you're mostly looking for an aesthetic that screams wannabe cowboy who doesn't know how to drive stick.

More on Tesla "fans": Man Hates His Tesla So Much He Blows it Up With 60 Pounds of Dynamite