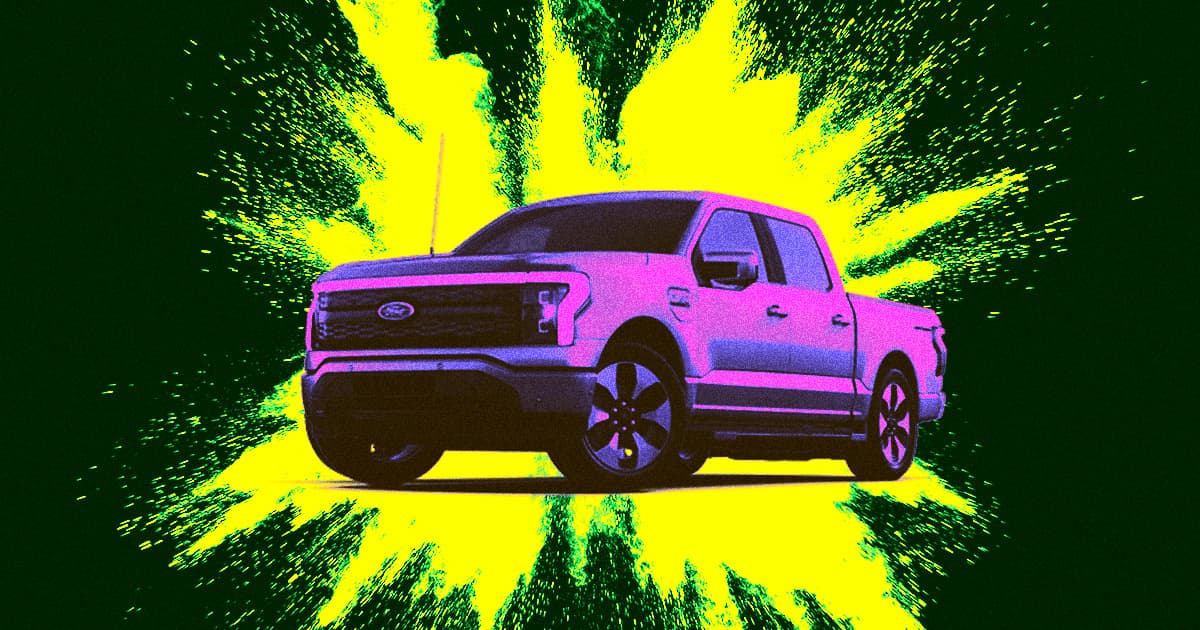 Out With a Bang

Ford's F-150 Lightning is meant to be the automaker's flagship electric pickup truck, and for the most part has been heralded with glowing praise from across the industry. But as more Lightnings hit the streets and accumulate miles, the more we'll get to see of their reliability — or lack thereof.

Take Eric Roe, a Ford Lightning owner and a fan of electric vehicles. In a tweet spotted by MotorTrend, Roe claims that after plugging his truck into an Electrify America charging station he heard a "loud boom," after which the truck was bricked like a giant, ill-fated smartphone.

"The charger went dark and the Lightning threw up a bunch of error codes and wouldn't start," Roe wrote. "Couldn't even shift into neutral."

The Lightning's untimely demise has left Roe in a tight spot, too, stranding him far from home.

My @Ford being towed away from an @ElectrifyAm charging station after the EA charger fried my truck. pic.twitter.com/V7tFWPWSoi

As of now, it's uncertain as to what exactly caused the Ford Lightning to drop dead, and who or what's at fault. It could be an issue on the Ford end of things, or it could be chalked up to bad chargers on EA's part.

At the very least, Roe's plight has not gone unnoticed. A Ford spokesperson has already tried to reach out in the replies of his tweet. Meanwhile, EA told MotorTrend that it's "investigating the unfortunate issue experienced by Eric Roe and have reached out to him."

Hopefully engineers can quickly get to the bottom of the issue to prevent further incidents, blame aside. Either way, it's not a good look for EVs built by legacy automakers, or the infrastructure that powers them.

It's definitely strange seeing a whole car getting bricked the same way a dodgy Walmart laptop might — but if this is the future of cars, pain points will be inevitable.

Real American eMuscle
Dodge Says It's Only Making an Electric Car Because the Performance Is So Good
7. 8. 21
Read More
Volkswagen Has Pledged to Spend $40 Billion on Electric and Hybrid Cars
11. 17. 17
Read More
This Patent Could Solve One of the Biggest Issues With Owning a Tesla
6. 6. 17
Read More
+Social+Newsletter
TopicsAbout UsContact Us
Copyright ©, Camden Media Inc All Rights Reserved. See our User Agreement, Privacy Policy and Data Use Policy. The material on this site may not be reproduced, distributed, transmitted, cached or otherwise used, except with prior written permission of Futurism. Articles may contain affiliate links which enable us to share in the revenue of any purchases made.
Fonts by Typekit and Monotype.