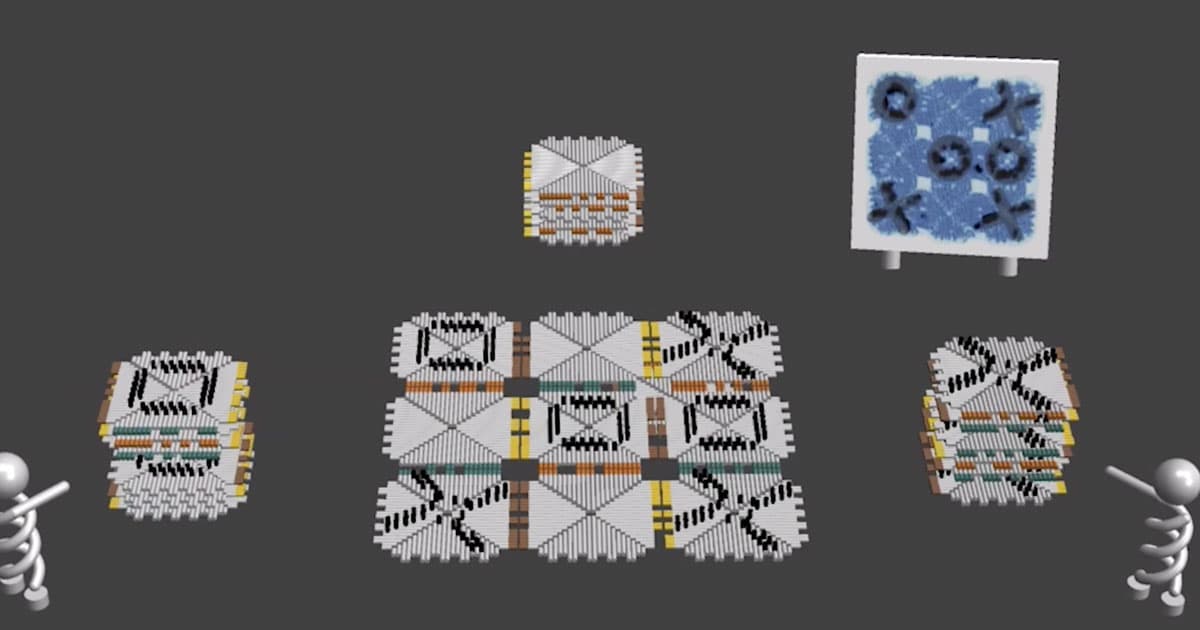 They used the game to demonstrate a new DNA origami technique.

They used the game to demonstrate a new DNA origami technique.

The world's smallest game of tic-tac-toe could have a big impact on the future of nanotechnology.

Researchers from the California Institute of Technology (Caltech) have developed a new technique for shaping structures out of strands of DNA, a process known as DNA origami. Unlike previous techniques, which effectively locked a structure in place once created, the researchers could reshape an already-constructed DNA structure using this new technique.

To demonstrate the powerful new technique, they used it to play game of tic-tac-toe using a DNA board. Because of course they did.

DNA origami takes advantage of the natural tendency of DNA molecules, or bases, to pair up with one another. Each base — A, T, C, and G — pairs with another of the bases: A and T are a team, as are C and G.

Strands of DNA pair up based on these matches — a strand with a molecule sequence ATTGCGA, for example, pairs perfectly with a TAACGCT strand — and researchers can create shapes out of DNA simply by manipulating the sequences of the letters.

But DNA strands can pair up partially, too. The Caltech team provides a somewhat depressing analogy of this based on dating people most similar to you, but the basic gist of it is that a strand will "dump" a strand that's a partial match (for example, one where five out of eight bases are pairs) for one that's a better match (one where six out of eight bases are pairs). This replacement of one so-so match for a better match is called "strand displacement."

In a paper published on Tuesday in the journal Nature Communications, the Caltech researchers describe how they combined strand displacement with a DNA origami technology called self-assembling tiles. That involves the creation of square-shaped tiles of DNA designed to fit together like the pieces of a puzzle.

To demonstrate their new DNA origami technique, the researcher put nine blank DNA tiles designed to form a three-by-three grid into a test tube. Once the tiles assembled, the researchers took turns adding X or O tiles to the test tube.

The researchers designed those tiles to replace specific blank tiles in the grid using strand displacement — the new tile was simply a better match in the chosen spot than the blank tile.

The game took six days, with player X emerging as the winner. But the research was about far more than just a game of tic-tac-toe.

The ability to reshape DNA structures could prove immensely useful in the future, as scientists are already exploring ways to use DNA origami to deliver drugs and sort molecular cargo.

"When you get a flat tire, you will likely just replace it instead of buying a new car. Such a manual repair is not possible for nanoscale machines," researcher Grigory Tikhomirov said in a news release. "But with this tile displacement process we discovered, it becomes possible to replace and upgrade multiple parts of engineered nanoscale machines to make them more efficient and sophisticated."

More on DNA origami: Nanobots Made of DNA Can Now Carry and Sort Molecular Cargo

Brands We Love
Build an Adorable Robot Army With Geeek Club's DIY Nanobots
10. 8. 20
Read More
Scientists Created Artificial Nanoparticles That Can Communicate With Each Other
6. 1. 17
Read More
Scientists Made Nanorobots That Can Release Drugs in The Body Using Mind-Control
8. 29. 16
Read More
+Social+Newsletter
TopicsAbout UsContact Us
Copyright ©, Camden Media Inc All Rights Reserved. See our User Agreement, Privacy Policy and Data Use Policy. The material on this site may not be reproduced, distributed, transmitted, cached or otherwise used, except with prior written permission of Futurism. Articles may contain affiliate links which enable us to share in the revenue of any purchases made.
Fonts by Typekit and Monotype.