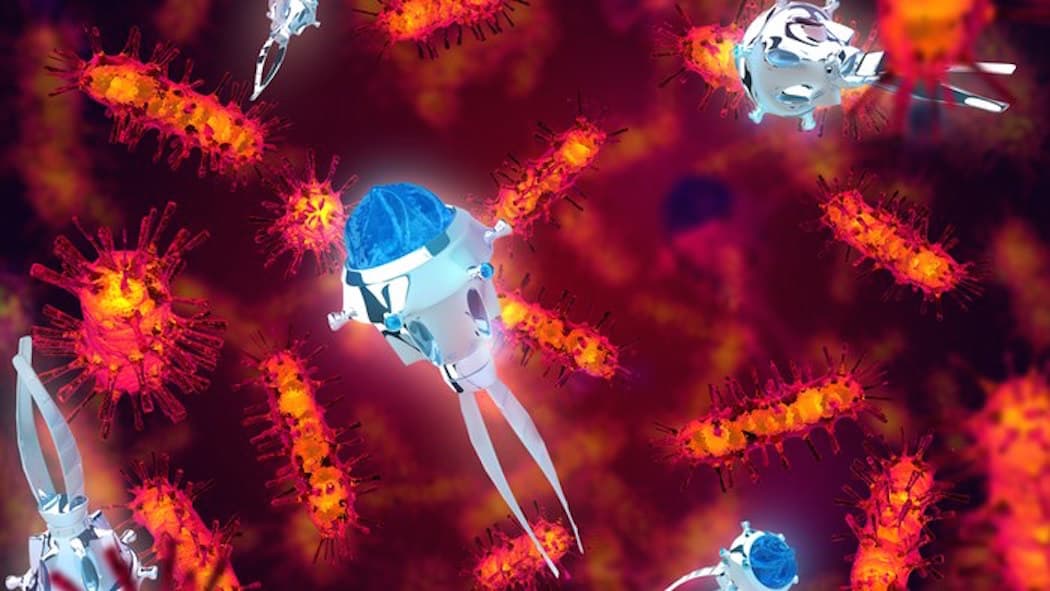 Scientists from the University of California are claiming that they have managed to deliver a medical payload directly into the gut tissue of a live organism using micro-motored nanobots.

Notably, the team behind the work notes that these little, microscopic machines can travel inside of the living creature and deliver the medical treatment without causing any harmful side effects related to the small bots.

Using micro-motor powered nanobots propelled by gas bubbles made from a reaction with the contents of the stomach in which they were deposited, these miniature machines have been successfully deployed in the body of a live mouse.

The tubular nanobots, which are about 20 micrometers long, 5 micrometers in diameter, and coated in zinc, are propelled by gas bubbles that are produced once the zinc reacts with the hydrochloric acid in the digestive system.

The nanobots travel at speeds of up to 60 micrometers per second and embed themselves in the stomach walls...where they remain after a full 12 hours.

These nanobots have been previously used on organic tissue, but this marks the first time that it was tested on a living organism. The success of this test leads researchers behind the study to further explore the technology as a way to deliver targeted drugs in humans.

However, as is always the case with medical breakthroughs, treatments must undergo rigorous testing and get approval from the FDA (Food and Drug Administration) before they can be used. possible application and testing on humans will need to be studied carefully before regulatory organizations give the go-ahead.

So there is no guarantee that this will be implemented, but it is exciting research.

The study, published in the journal ACS Nano, has yet to make announcements regarding the possibility of human-based trials or when such trials may begin.

Read This Next
Brands We Love
Build an Adorable Robot Army With Geeek Club's DIY Nanobots
Futurism
Scientists Created Artificial Nanoparticles That Can Communicate With Each Other
Futurism
Scientists Made Nanorobots That Can Release Drugs in The Body Using Mind-Control
Futurism
World First: Scientists Discover How to Send Medication Straight to the Placenta
Futurism
By 2020, You May Be Able to Test Yourself for Cancer In Your Own Home
More on Hard Science
Reel Big Dish
Wednesday on the byte
Brilliant Scientists Decide to Name the World's Largest Telescope "SKA"
Horrible Geese
Dec 4 on futurism
Furious Geese Are Defeating Humans, Scientists Find
Quacks Like a Duck
Dec 1 on futurism
Those Headlines About Scientists Building a Wormhole Are Total Nonsense, People
READ MORE STORIES ABOUT / Hard Science
Keep up.
Subscribe to our daily newsletter to keep in touch with the subjects shaping our future.
+Social+Newsletter
TopicsAbout UsContact Us
Copyright ©, Camden Media Inc All Rights Reserved. See our User Agreement, Privacy Policy and Data Use Policy. The material on this site may not be reproduced, distributed, transmitted, cached or otherwise used, except with prior written permission of Futurism. Articles may contain affiliate links which enable us to share in the revenue of any purchases made.
Fonts by Typekit and Monotype.