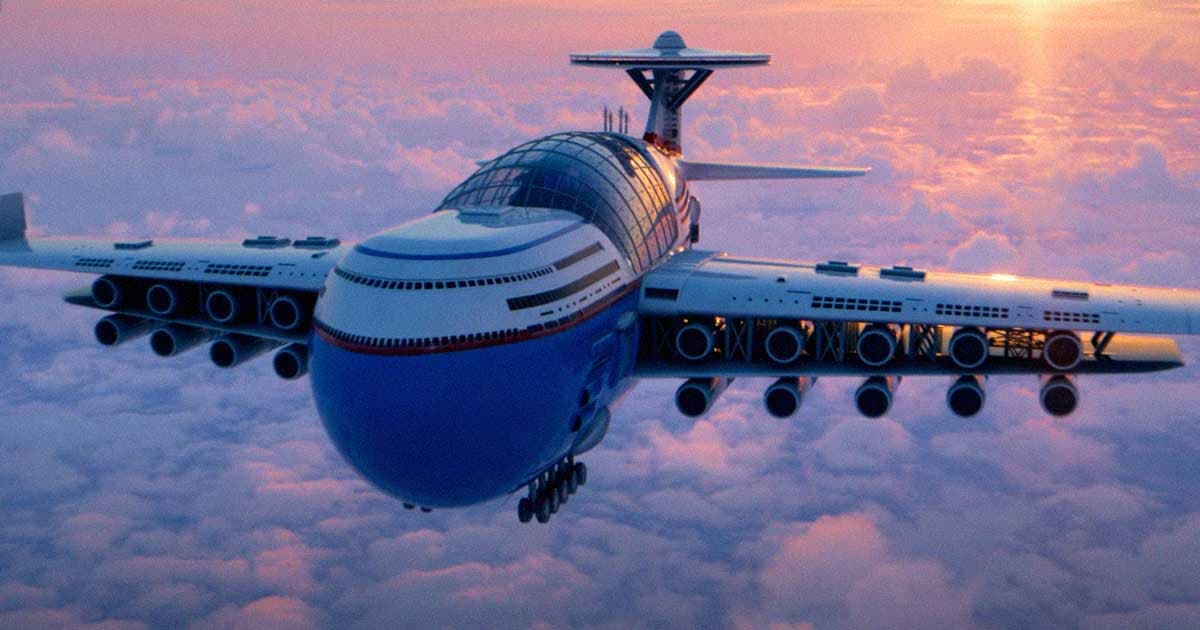 We're in Awe of this Absolutely Deranged "Nuclear-Powered Sky Hotel"

"I bet I still end up next to someone else's screaming three year old for the entire trip."

"I bet I still end up next to someone else's screaming three year old for the entire trip."

It's definitely not a bird, but it is sort of a plane. Specifically, it's a non-existent but admittedly very cool concept called the Sky Cruise, a fantastical nuclear-powered sky hotel.

The impressively-detailed video rendering visualizes a hulking airborne vessel, allegedly designed to house over 5,000 guests in nearly nonstop flight. Alongside magnificent views of nature — including a close-up look at the Northern lights – there are seemingly endless things to do: fancy restaurants, a massive shopping mall, gyms, theaters, pools, wellness and medical services, event spaces, and more. The narrator even points out that getting married above the clouds would be a pretty awesome way to say "I do."

But, as one YouTube commenter pointed out, there seems to be one very important amenity missing.

"I'd still want an old-fashioned arcade where I can turn my tickets in for cheap-azz prizes," they wrote. Honestly, fair.

The conceptual skycraft boasts 20 electric engines, powered solely by a "small nuclear reactor" that "uses highly-controlled fusion reaction," And because it wouldn't need to be refueled, it would rarely need to land. Guests would fly to and from the sky high hotel on commercial or private jetliners, and all repairs would be done in-air.

Many commenters, however, were quick to call out design flaws — not the least being that practical nuclear fusion doesn't actually exist yet. And even if it did, there would be other immense engineering challenges to surmount.

"If physics and aerodynamics didn't exist, then this vessel might actually be able to take off," remarked another YouTuber. Harsh!

But the biggest caveat of all? The narrator claims that the design "combines the features of a commercial plane, while offering the epitome of luxury." Seeing as how commercial plane and luxury do not belong in the same sentence, that feels like a major plothole.

As another commenter so elegantly put it: "I bet I still end up next to someone else's screaming three year old for the entire trip."

More on the future of sky travel: The Future of Air Travel Is Apparently the Final Circle of Hell

Autonomous Hotel
Futuristic Hotel Suite Would Drive You Around While You Sleep
1. 3. 19
Read More
Airplane Noise Can Be Reduced With a Simple Solution
3. 9. 18
Read More
It's Now Possible to Earn a Degree in "Flying Cars"
1. 24. 18
Read More
+Social+Newsletter
TopicsAbout UsContact Us
Copyright ©, Camden Media Inc All Rights Reserved. See our User Agreement, Privacy Policy and Data Use Policy. The material on this site may not be reproduced, distributed, transmitted, cached or otherwise used, except with prior written permission of Futurism. Articles may contain affiliate links which enable us to share in the revenue of any purchases made.
Fonts by Typekit and Monotype.