Futuristic Hotel Suite Would Drive You Around While You Sleep

Why go to a hotel when a hotel can come to you? 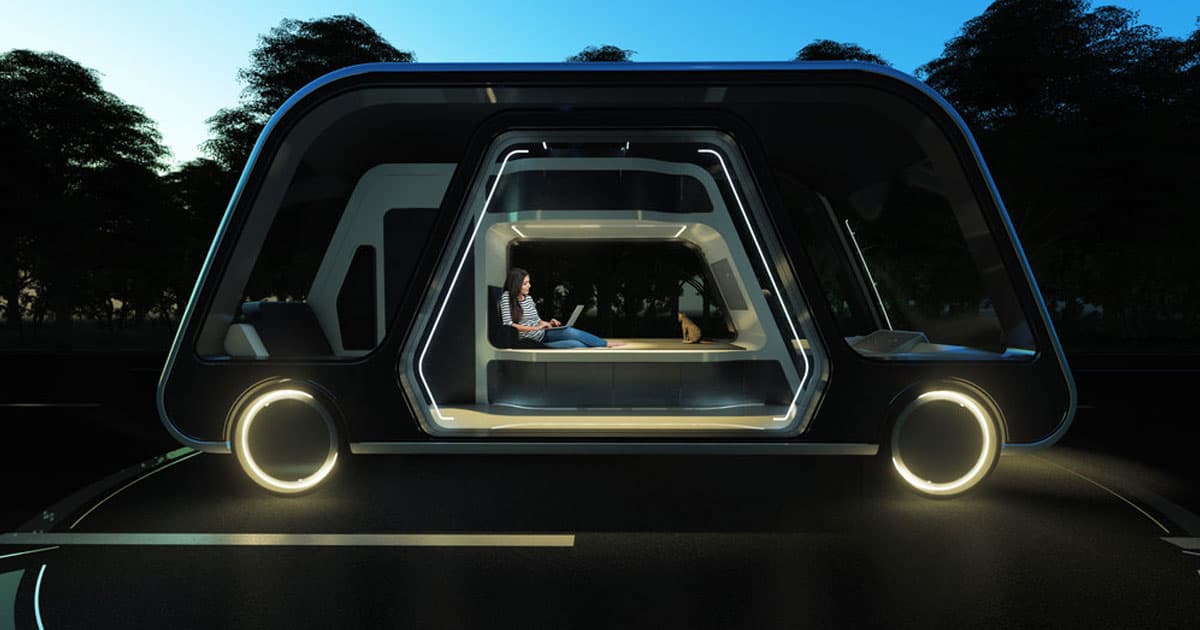 On the Road Again

So much time is lost in transit, from spending hours in line at airport security to getting stuck in traffic.

But Toronto-based design studio Aprilli has cooked up a futuristic solution that could turn those lost hours into valuable time. The firm's "Autonomous Travel Suite" concept combines the ease and comfort of a hotel room with the power of autonomous driving. Think of it as an ultra-deluxe Uber that you can sleep, work and eat in while you travel — not to mention a bold vision of the future of transportation.

The autonomous pod is a full-fledged transportation solution that is "equipped with the basic sleeping, working, and washroom facilities, allowing the guests to use their travel time more efficiently and productively," according to Aprilli's site. You can summon it with an app, and Aprilli sees the Autonomous Travel Suite to be part of a much bigger "network of hotel facilities" where individual pods can dock to offer clients even more amenities.

In an explainer video, for instance, you can watch the pod connect to a "parent suite" inside a circular "hotel" that turns the simple travel suite into a much bigger "upscale integrated unit" that includes a washroom and living space.

Travel to Live, Live to Travel

Needless to say, it's an ambitious idea — we haven't even figured out how to get autonomous vehicles to reliably share the road with human drivers.

And it's not an entirely unique idea, either. Other companies like IKEA envision the future of autonomous vehicles as not just hotel suites: their SPACE10 concepts revealed in September include visions of a self-driving mini-greenhouse and a pop-up shop.

Nonetheless, Aprilli's concept is a promising idea that could shift the whole paradigm of travel — and make some of the most bothersome hours of travel convenient, comfortable, and efficient.

READ MORE: Self-driving hotel room comes to you like an Uber [CNET]

More on autonomous concepts: This Futuristic Audi Concept Transforms Itself Into a Flying Taxi

Read This Next
Futurism
A New MIT Project Could Bring Driverless Cars to Rural Roads
Futurism
Uber Plans To Launch Flying Taxis With Technology That Doesn’t Exist
Futurism
Uber Settles with Family of AV Crash Victim
Futurism
Uber's Self-Driving Car Just Killed a Pedestrian (updated)
Futurism
A UK Project Wants to Make Autonomous Driving More Human
More on Advanced Transport
Pepsi Semi
Yesterday on the byte
Tesla Semi Truck Drives 500 Miles Fully Loaded
Out With a Bang
Tuesday on the byte
Driver Says His Ford F-150 Lightning Made a "Loud Boom" and Died When He Plugged It In
Deep in a Hole
Tuesday on the byte
Something Very Weird Is Going on at Elon Musk's Boring Company
READ MORE STORIES ABOUT / Advanced Transport
Keep up.
Subscribe to our daily newsletter to keep in touch with the subjects shaping our future.
+Social+Newsletter
TopicsAbout UsContact Us
Copyright ©, Camden Media Inc All Rights Reserved. See our User Agreement, Privacy Policy and Data Use Policy. The material on this site may not be reproduced, distributed, transmitted, cached or otherwise used, except with prior written permission of Futurism. Articles may contain affiliate links which enable us to share in the revenue of any purchases made.
Fonts by Typekit and Monotype.