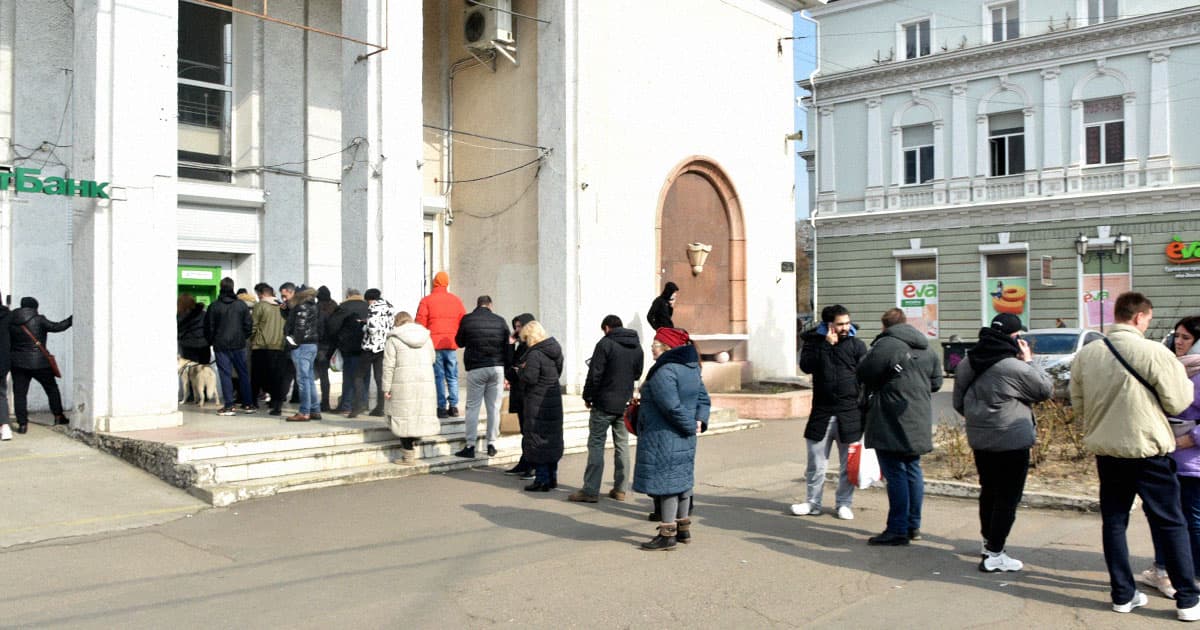 This is absolutely not the time for crypto nonsense.

This is absolutely not the time for crypto nonsense.

Another day, another bad crypto take — but with war brewing in Ukraine, this one really takes the cake.

Known only by their Instagram handle @nft.money, this NFT bro took it way too far when posting what appeared to be a screencapped tweet showing “large queues at ATMs throughout Ukraine.” Per what appears to be their half-baked analysis, the Ukrainians pictured would have been much better off if only they’d invested their hard-earned cash into crypto.

This kind of tomfoolery may fly on Instagram, where @nft.money’s post was spammed with comments from indistinguishable bots and people who claimed the user’s “NFT Playbook” changed their lives.

But in the real world — or, at least, on Twitter dot com — the account was unsurprisingly called out for its callous crypto promotion.

“How’s bitcoin work during a war when the electricity and cell phone service gets knocked out?” NBA agent Anthony Raia wrote in a tweet that, ironically, had @nft.money’s IG post screencapped.

How’s bitcoin work during a war when the electricity and cell phone service gets knocked out? pic.twitter.com/su54mwZVQt

Naturally, crypto defenders dispatched themselves to the comments to try to one-up this agent’s hot take — but this being Twitter, they too got shut down.

“People are in line at ATMs because there is uncertainty about whether businesses will be able to process electronic payments,” user Matthew Lee Myers, whose bio says he is involved in the Metaverse to boot, wrote. “Recommending a different type of electronic payment, with slower, more expensive transactions and less payment processing availability, is peak BTCbrain.”

“The cryptobros are so shameless in their grifting and general foolishness,” another user succinctly declared.

Yet another user had a much darker response: “We’ve all heard the story of ancestors who fled war by sewing bitcoins into the lining of their coats.”

Given that Ukraine is, per the country’s vice prime minister Mykhailo Federov, one of the top five countries in the world for crypto usage, there may indeed be citizens rushing to figure out if and how their digital currency can help them out in the impending battle with Russia. Indeed, crypto tracking firm Coinglass calculated at press time that a whopping $531 million worth of crypto has been liquidated in the last 24 hours as the conflict between Russia and Ukraine heats up.

If people are withdrawing their crypto for cash en masse, it means they’re scared of what’s to come and what they may have to deal with — and that @NFT.money’s tone-deaf assertion that crypto is somehow superior to cash in a time of war is absolutely bogus.

More crypto “ownership”: The CEO of Coinbase Gets Brutally Owned, May Never Recover

From Our Partners
Ready to Start Making Big Returns on Your Retirement Money? RocketDollar Can Help.
12. 3. 21
Read More
Brands We Love
If You’re Ready To Invest in Crypto, Here’s the Best Place To Start
10. 20. 21
Read More
From Our Partners
Learn A New Computer Language With This Coding & Engineering Bundle Sale
10. 17. 21
Read More
+Social+Newsletter
TopicsAbout UsContact Us
Copyright ©, Camden Media Inc All Rights Reserved. See our User Agreement, Privacy Policy and Data Use Policy. The material on this site may not be reproduced, distributed, transmitted, cached or otherwise used, except with prior written permission of Futurism. Fonts by Typekit and Monotype.