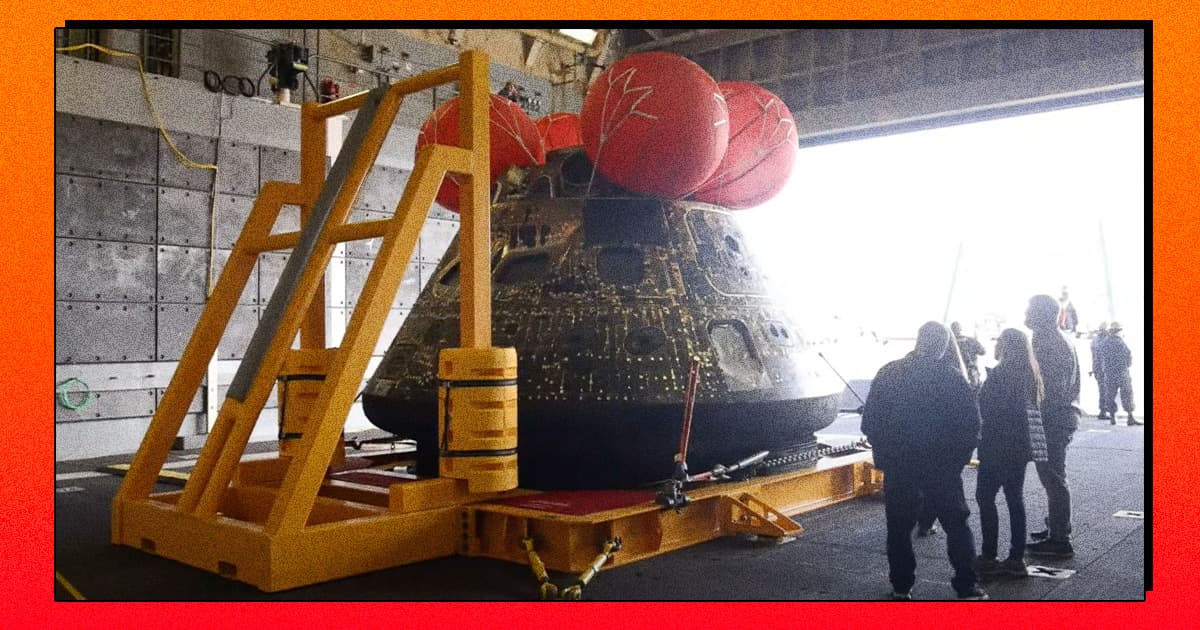 Close Up Shows Charred NASA Capsule After Returning From the Moon

On Sunday, NASA's Orion capsule splashed down in the Pacific Ocean, marking the end of the Artemis I flight test's remarkable, 25 and a half day journey. Reaching past the Moon and back, the Orion spacecraft — which is capable of carrying humans but was unmanned for this test — traveled a staggering 1.4 million miles, and its success is a major step towards NASA's goal of returning astronauts to the lunar surface.

Recovering Orion from the middle of the ocean took a day or two, but it's now back on solid ground. The spacecraft arrived at the San Diego naval station this Tuesday aboard the USS Portland, affording enthusiasts a closeup look at the capsule — and unsurprisingly, it's looking pretty toasty.

Behold the serious amount of charring in these videos by NASASpaceFlight, which gradually becomes more severe from the top down. The bottom third practically looks like a marshmallow after the beating it took during reentry.

Bearing the brunt of that charring is the capsule's modular heat shield located at its base, which appears really chewed up. Not surprising, since NASA says it experienced temperatures around 5,000 degrees Fahrenheit, which is about half the Sun's surface temperature. Just take a look at this footage of the craft surviving its first reentry to Earth's atmosphere back in 2014.

The spacecraft's resilience will be a key point of inspection for NASA engineers. While not intended to be fully reusable, the space agency plans to at least reuse some of the Orion's parts in its next iteration for the upcoming Artemis II mission, which will be carrying astronauts.

Just how much will be retrieved and reused remains to be seen, but onboard flight computers are a major candidate, and could save NASA a boatload of money if they don't need to be replaced.

Of course, the capsule is valuable not just for its salvageable parts but its data, too, collected through a variety of sensors, not to mention a wealth of valuable insights that will come with analyzing the flight computers themselves.

Likely to the chagrin of both astronauts and engineers, there will be plenty of time to prepare for the next Artemis II mission which will have astronauts perform a lunar flyby, currently scheduled at least two years from now.