Amazing Artemis Photo Shows Every Human, Alive or Dead, Plus the Moon

"It's really hard to articulate what the feeling is. It's really amazing to be here, and see that." 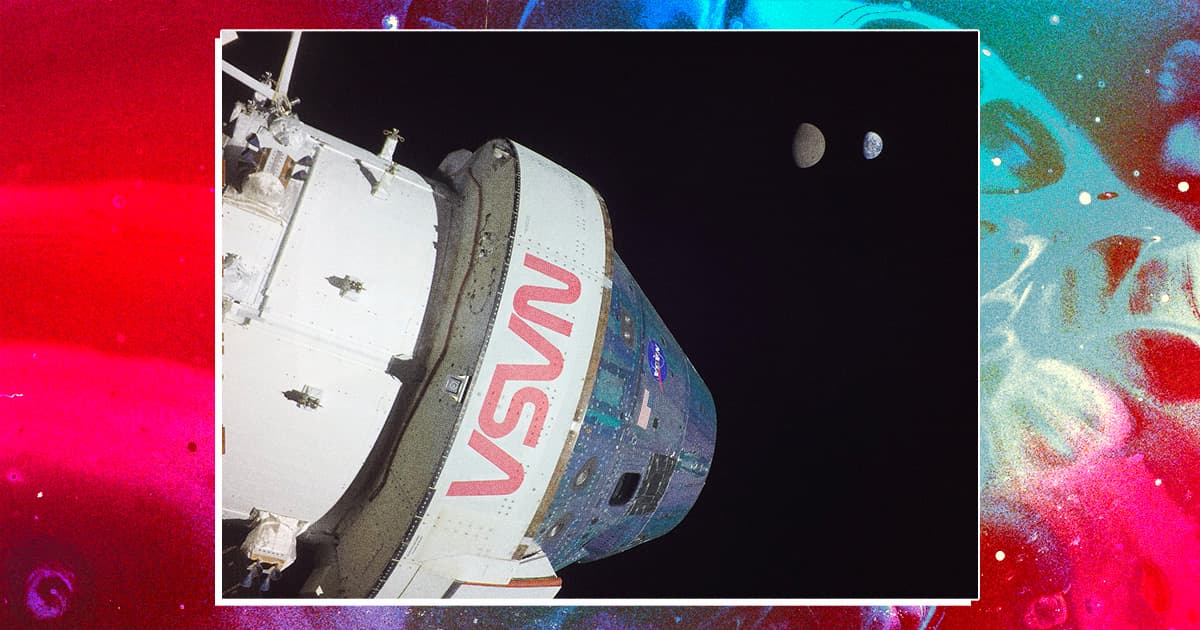 On Monday, NASA's uncrewed Orion spacecraft reached its farthest distance from Earth at nearly 270,000 miles away as part of the agency's Artemis I mission. It's the farthest a spacecraft capable of carrying human passengers has ever traveled, in fact, at about 20,000 miles clear of the previous record set by the crewed Apollo 13 mission way back in 1970.

At its journey's zenith, the Orion spacecraft took a moment to gaze back towards its home planet, and captured a photo for the ages, showing both the Moon and the Earth, each half shrouded in shadow and perfectly in line with each other, resting in the unyielding black of space, while part of the capsule and its NASA logos are proudly in view ahead of them.

From here, the Moon appears larger than Earth, but neither could be described as large overall. It's the ultimate, space-spanning exercise in perspective, where an entire world is reduced to a mere marble, looking no more significant than a plastic Earth you'd find hanging in a toy solar system over a child's bed at night.

Unlike that plastic imitation, however, there's about eight billion of us inhabiting the real one. But from Orion's lofty vantage point, you'd never be able to tell. No buildings, no cities, and no, not even the Great Wall — only patches of blue ocean effaced by swirls of cloud.

Flight day 13: Orion reached its maximum distance from Earth during the #Artemis I mission when it was 268,563 miles away from our home planet. Orion has now traveled farther than any other spacecraft built for humans. pic.twitter.com/sfdPFjf7Og

"The imagery was crazy," said mission lead flight director Rick LaBrode at a NASA news conference, as quoted by Ars Technica. "It's really hard to articulate what the feeling is. It's really amazing to be here, and see that."

That ineffable mix of emotions, full of awe at the sublime beauty, but also of a humbling insignificance, has been described as the Overview Effect, in which many astronauts have reported similar evocations after seeing the Earth from space in person.

A photo's effect — even this one's — isn't quite the same as actually experiencing an offworld perspective of our planet. It does give us an idea, though.

Famously, William Shatner of "Star Trek" fame experienced the Overview Effect first hand after his voyage to space aboard a private Blue Origin flight. In an excerpt of his memoir, Shatner wrote of the view: "All I saw was death."

In a way, it's not hard to see why Shatner was filled with "overwhelming sadness." At such a distance, all seems trivial, like how our grievances of the past can seem petty, silly, or even funny with enough time elapsed.

Yet by the same token, there's more reason to be hopeful from the spectacle. For one, the fact that this was taken by a craft designed to carry people implies that one day, humans, too, will be able to travel that far, and perhaps beyond, where the Earth may be no more than, yes, a Pale Blue Dot, or not even a dot at all.

It's also evincive of the Artemis mission's success overall, which has been described as "outstanding" by Orion program manager Howard Hu, as quoted by CNN. In fact, Orion is performing so well that NASA is already considering an additional seven test objectives before it's set to fly back around the Moon, and finally down to Earth.

A precursor to a future crewed Artemis mission to the Moon, the runaway success here, while not without its tribulations, bodes well for astronauts planning to set foot and even live on the lunar surface in years to come.

More on NASA: Rejoice! NASA's Artemis I Is Now Orbiting the Moon