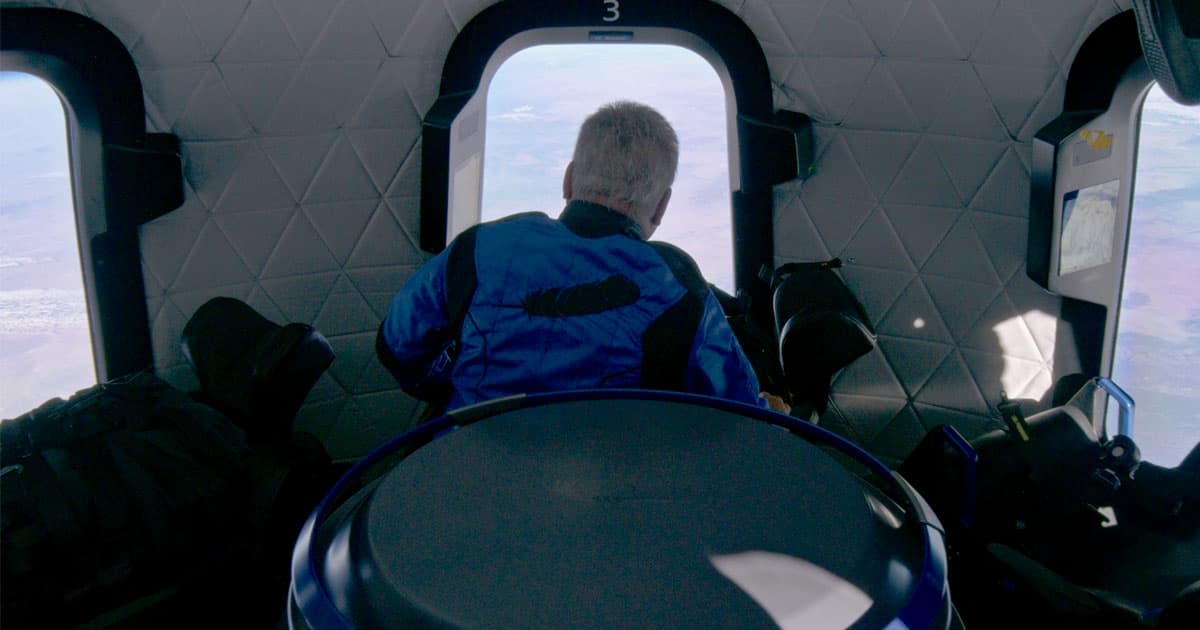 During his maiden voyage to space, "Star Trek" icon William Shatner had an awe-inspiring experience — but it wasn't necessarily positive.

"So, I went to space," reads a Variety-published excerpt from Shatner's new book, "Boldly Go: Reflections on a Life of Awe and Wonder."

After describing the exhilarating launch procedure and beginning of his zero-gravity excursion, Shatner wrote that when he turned around to look into the void of space, he was shocked by the emptiness he found.

"When I looked in the opposite direction, into space, there was no mystery, no majestic awe to behold," Shatner wrote. "All I saw was death."

In spite of his conceptual love of space — after all, he played Captain Kirk on "Star Trek" during the beginning of the space race — and the mystery it presented, what Shatner was forced to contend with in the real thing was far from what he expected.

"I saw a cold, dark, black emptiness," he wrote. "It was unlike any blackness you can see or feel on Earth. It was deep, enveloping, all-encompassing."

After looking back "toward the light of home," Shatner described an intense homesickness for the planet he had just left.

"I turned back toward the light of home," the "TJ Hooker" star wrote. "I could see the curvature of Earth, the beige of the desert, the white of the clouds and the blue of the sky. It was life. Nurturing, sustaining, life. Mother Earth. Gaia. And I was leaving her."

Many space travelers have described an experience termed the "Overview Effect," or a sense of euphoria and interconnectedness stemming from viewing Earth from above. Shatner alluded to the phenomenon, but even his takeaway there sounds unusually dark.

"When someone travels to space and views Earth from orbit," he wrote, "a sense of the planet’s fragility takes hold in an ineffable, instinctive manner."

"The contrast between the vicious coldness of space and the warm nurturing of Earth below filled me with overwhelming sadness," Shatner added. "My trip to space was supposed to be a celebration; instead, it felt like a funeral."

While this is the most detailed description of Shatner's trip to space, it was not the first time the "Star Trek" star had spoken publicly about it.

Shortly after landing from his spaceflight, which took place almost exactly a year ago, Shatner thanked Blue Origin founder Jeff Bezos profusely for the trip.

"What you have given me is the most profound experience," he told Bezos through tears. "I hope I never recover from this."

If his memoir is any indicator, Shatner has seemingly kept that hope alive.

More space feels: Scientists Say New James Webb Images Are So Powerful That It Was Emotional Just Looking at Them

Read This Next
Monkey Business
China Plans to Send Monkeys to Space Station to Have Sex With Each Other
And Beyond
How NASA Got Price Gouged on the SLS, According to Its Former Second-in-Command
Astronaut Drip
We Just Got the First Peek at NASA's Artemis Moon Landing Suits
Blast Off
Former Astronaut Details Quest to Grow Cannabinoids in Space
Billionaire Bailout
Bernie Sanders Working to Block Jeff Bezos From NASA Moon Contract
More on Off World
Martian Oases
Yesterday on futurism
Scientist Proposes Growing a Forest Inside a Bubble on Mars
Appetite for Dest...
Thursday on the byte
Black Hole In "Hyper-Feeding Frenzy" Chews Through Stars and Shoots Its Leftovers Towards Earth
Lunar RGB
Wednesday on the byte
NASA Shows Off Artemis "Party Mode," Powered by Amazon (TM) Alexa (TM)
READ MORE STORIES ABOUT / Off World
Keep up.
Subscribe to our daily newsletter to keep in touch with the subjects shaping our future.
+Social+Newsletter
TopicsAbout UsContact Us
Copyright ©, Camden Media Inc All Rights Reserved. See our User Agreement, Privacy Policy and Data Use Policy. The material on this site may not be reproduced, distributed, transmitted, cached or otherwise used, except with prior written permission of Futurism. Articles may contain affiliate links which enable us to share in the revenue of any purchases made.
Fonts by Typekit and Monotype.