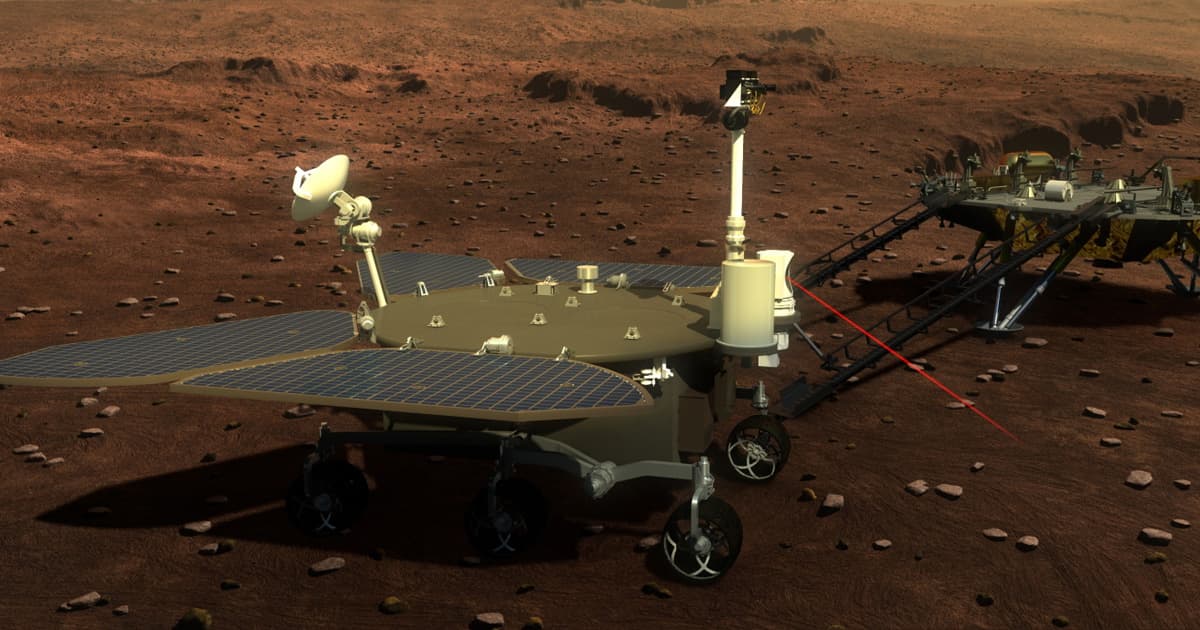 Chinese Rover Sends Back First Photos From Surface of Mars

"It's another important milestone for China's space exploration."

"It's another important milestone for China's space exploration."

China has shared the first pictures taken by its Zhurong Mars rover after touching down on the Red Planet's surface over the weekend.

It's a momentous occasion. Early Saturday morning Beijing time, China made history by becoming only the third country after the US and the USSR to successfully land a remotely operated probe on the surface of Mars.

China says Zhurong will spend about 90 Martian days to explore the surrounding Utopia Planitia, a huge plain in the Martian northern hemisphere. Scientists believe there are massive deposits of water ice lurking beneath the area — about as much water as Lake Superior, according to NASA.

One black and white image shows the ramp the rover will use to exit the landing module and reach the surface below.

A color image also shows the rover's navigation camera as well as its solar wings and antennas.

For now Zhurong will check its instruments and perform several checkouts of its systems and instruments over the next seven days.

"The Mars exploration mission has been a total success," Zhang Kejian, head of the China National Space Administration (CNSA) said in a statement following the landing. "It's another important milestone for China's space exploration."

More on Zhurong: Chinese Mars Rover Reportedly Touches Down on Surface of Mars

Artificial Baby
Chinese Scientists Create System to Care For Embryos in Artificial Womb
2. 1. 22
Read More
Safe Vaccines
China Is Giving People a COVID Vaccine That Isn't Done Being Tested
7. 31. 20
Read More
Martian Duds
On Tomorrow's Launch, NASA Is Sending Spacesuit Chunks to Mars
7. 29. 20
Read More
+Social+Newsletter
TopicsAbout UsContact Us
Copyright ©, Camden Media Inc All Rights Reserved. See our User Agreement, Privacy Policy and Data Use Policy. The material on this site may not be reproduced, distributed, transmitted, cached or otherwise used, except with prior written permission of Futurism. Articles may contain affiliate links which enable us to share in the revenue of any purchases made.
Fonts by Typekit and Monotype.