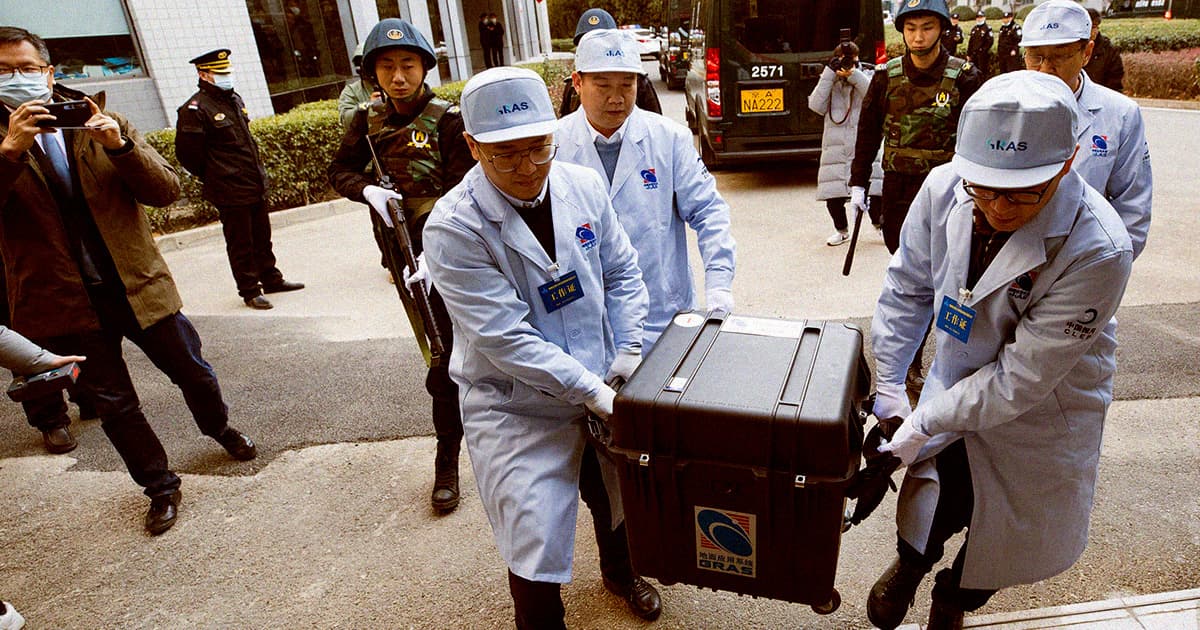 It could be the key to unlocking fusion energy.

It could be the key to unlocking fusion energy.

Chinese scientists are studying lunar rock samples to assess whether or not they're a good fuel source for nuclear fusion.

Researchers at the Beijing Research Institute of Uranium Geology are analyzing a 50-milligram rock sample, according to Space.com, obtained during the country's Chang'e-5 lunar return mission. The scientists are analyzing the rocks for an isotope called helium-3, which some scientists believe could be a viable fuel for fusion power plants. While it’s rare on Earth, some researchers believe the Moon might be a rich source of the isotope.

"The main objective of the study is to determine the content of helium-3 in the lunar soil, the extraction parameters of helium-3, which indicates at what temperature we can extract the helium, and how helium-3 gets attached to the lunar soil," institute researcher Huang Zhixin told China Central Television, a state-controlled broadcaster.

Fusion researchers have long believed that helium-3 could be a valuable fuel source for fusion reactors. Scientists at MIT's Plasma Science and Fusion Center found that adding just trace amounts of the isotope into the nuclear fusion process resulted in improved efficiency and heating within the reactor.

The problem? Helium-3 is extremely rare on Earth. However, it may be abundant on the Moon, because the lunar surface is largely unprotected from solar winds, which can deliver helium-3 into its rocks.

In fact, mining it from the surface of the Earth's natural satellite is the premise of Duncan Jones' critically acclaimed 2009 film "Moon."

Moon to the Earth

While the potential for a game-changing isotope that could unlock the door to nuclear fusion is plenty exciting, it’s important to remember that there’s no infrastructure in place to mine the lunar surface and transport materials back to Earth. So let's not close the door on terrestrial renewable energy solutions.

But there’s still plenty of room for excitement.

"Nevertheless, making new measurements of helium-3 concentrations at new locations on the Moon is scientifically valuable," planetary scientist and astrobiologist Ian Crawford, who's not involved in the Chinese research, told Space.com.

Fusion Force
China Announces Plan for Hybrid Fission-Fusion Power Facility
Sep 17
Read More
It’s Getting Hot In Here
China's "Artificial Sun" Fusion Reactor Just Set a World Record
5. 29. 21
Read More
Great Balls of Fire
"Radioactive Gobstoppers" Could Stop the Next Nuclear Reactor Meltdown
6. 30. 20
Read More
+Social+Newsletter
TopicsAbout UsContact Us
Copyright ©, Camden Media Inc All Rights Reserved. See our User Agreement, Privacy Policy and Data Use Policy. The material on this site may not be reproduced, distributed, transmitted, cached or otherwise used, except with prior written permission of Futurism. Articles may contain affiliate links which enable us to share in the revenue of any purchases made.
Fonts by Typekit and Monotype.