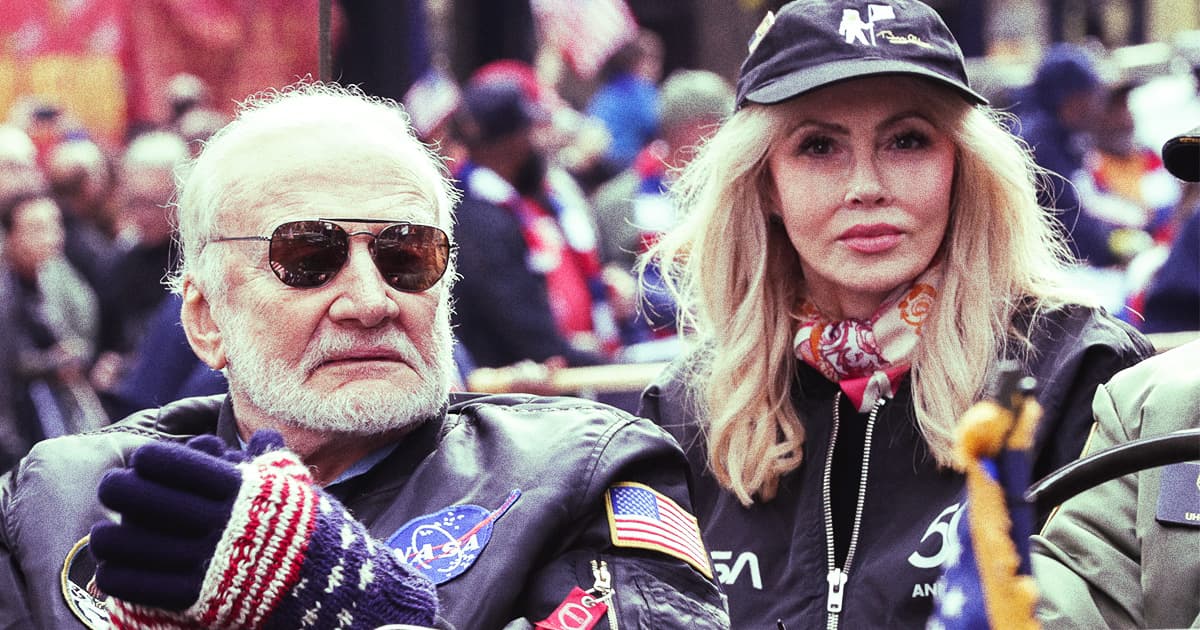 Buzz Aldrin Marries His Employee at the Young Age of 93

To Matrimony and Beyond

Famed Apollo astronaut Buzz Aldrin — the second person to walk on the Moon, you'll recall — has married a woman who works for him at the cool age of 93.

In a Twitter post announcing the nuptials, Edwin "Buzz" Aldrin said that he'd married Dr. Anca Faur, his "longtime love," in a private ceremony that took place on his birthday.

The pair was, per the post, "as excited as eloping teenagers."

Faur, the astronaut's new bride, is 63 years old and per her LinkedIn is the executive vice president of Buzz Aldrin Ventures, a company that, among other things, seems to sell branded Apollo merchandise. A chemical engineer, the newlywed seems to have worked at Aldrin's company for going on four years in various executive positions, including as its vice president and as a member of its board of directors.

As the Hollywood Life celebrity news site notes, Aldrin's wedding to Faur is far from his first rodeo. He'd been married four times previously, and has three children from his first marriage.

Following his history-making role as the pilot of the Apollo lunar mission in 1979, Aldrin has done a ton to promote scientific understanding — and was one of the earliest and loudest advocates for the colonization of Mars, too. He also once punched a Moon landing conspiracy theorist in the face.

In his marriage announcement post, Aldrin — who once played himself on "30 Rock" in an episode where he admitted to having dated main character Liz Lemon's mother — also noted that he was set to be honored at the 20th annual Living Legends of Aviation awards ceremony. Per a press release, this year's awards were hosted by previous honoree John Travolta on January 20th, and Aldrin was honored alongside "Star Trek" luminary William Shatner, who himself took an infamous trip to space in 2021.

While it's usually a bit of an HR disaster to marry one's employee, the astronaut's wedding is, at very least, a reminder that one can continue to find love and happiness into their nonagenarian years — if they're rich and famous, at least.

God Shot
Astronaut Says He Had Religious Experience During Spacewalk
9. 9. 22
Read More
Be Better
Why Hasn’t NASA Hired More Black and Brown Astronauts?
3. 24. 22
Read More
Catching Zs in Space
The Bunks in the Chinese Space Station Are Absolutely Enormous
9. 22. 21
Read More
+Social+Newsletter
TopicsAbout UsContact Us
Copyright ©, Camden Media Inc All Rights Reserved. See our User Agreement, Privacy Policy and Data Use Policy. The material on this site may not be reproduced, distributed, transmitted, cached or otherwise used, except with prior written permission of Futurism. Articles may contain affiliate links which enable us to share in the revenue of any purchases made.
Fonts by Typekit and Monotype.