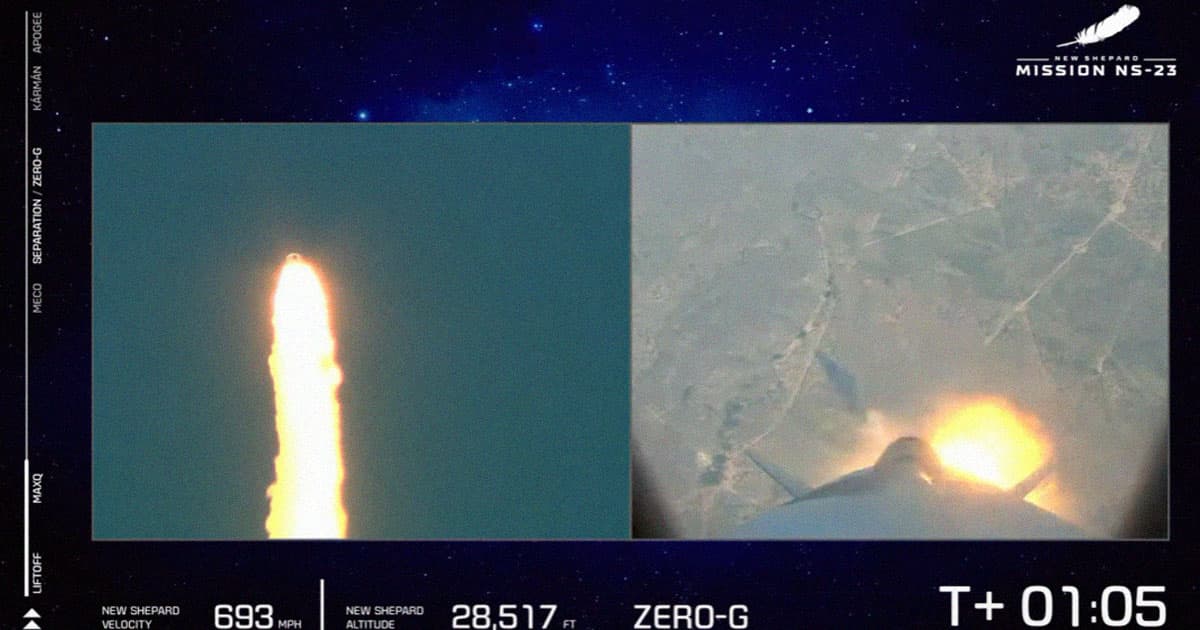 Good thing there was nobody on board.

Good thing there was nobody on board.

Blue Origin had to abort its latest uncrewed mission midflight.

The company's New Shepard capsule was carrying a number of science experiments to a planned altitude of just over 60 miles — the internationally recognized edge of space — when it had to suddenly fire its abort motor escape system roughly a minute after launching from the company's launch pad in West Texas.

Fortunately, nobody was on board, and the capsule did make a soft landing after pulling the plug — but things could've looked a lot uglier if tourists had been on board.

"Booster failure on today’s uncrewed flight," the company said in the wake of the incident. "Escape system performed as designed."

The company has used the platform to launch a number of crews, including high-profile celebrities, to the edge of space.

We still don't know what happened to the booster after it separated from the New Shepard capsule, as the company decided to focus on the fate of its capsule instead for its live feed.

The feed shows the capsule and booster light up in a fiery but likely intentional explosion, around 1:21:50 into the livestream), as the capsule was jettisoned from its booster to gain distance.

The company has yet to elaborate on what occurred — or what happened to its booster.

"We’re responding to an issue this morning at our Launch Site One location in West Texas," the company tweeted. "More information to come as it is available."

The capsule itself, however, appears to have survived with its payload stored inside, gently making its way back to the surface with the aid of its landing parachutes.

In other words, Blue Origin's redundant systems in the case of launch failure appear to have worked — the best case scenario, given the circumstances.

"You can see how our backup systems kicked in today," the host of the company's webcast said, "to keep our payloads safe during an off-nominal situation."

"A good reminder (that I needed) that no rocket launch is routine," Bloomberg space reporter Loren Grush wrote.