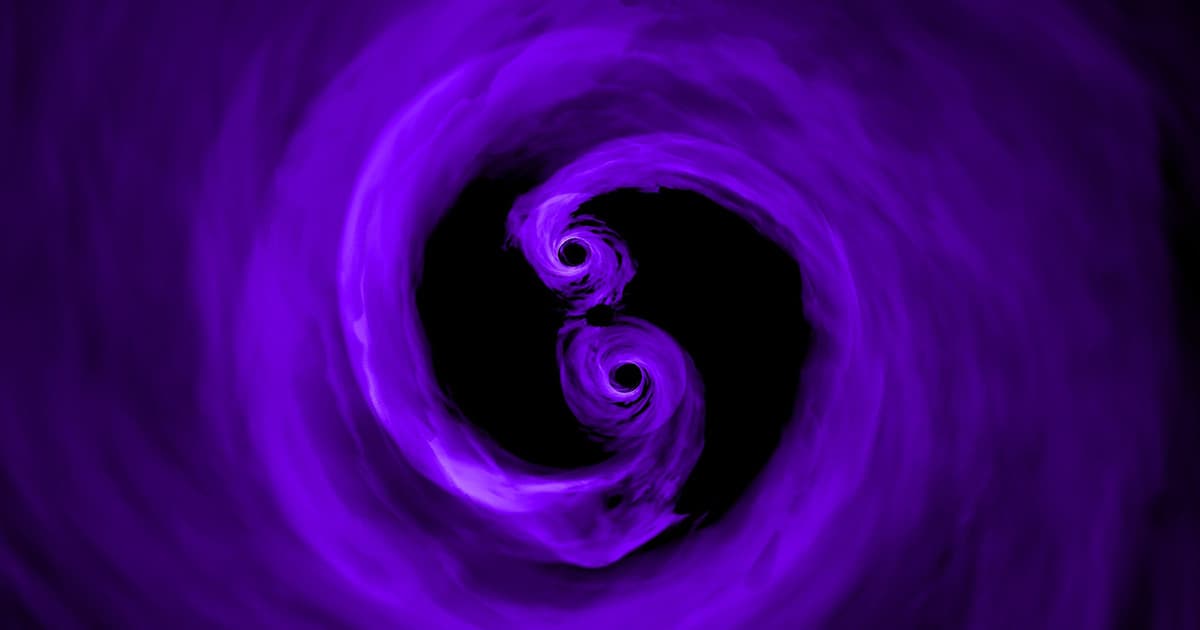 Before and after two black holes merge together, they give off a complicated series of gravitational waves — and scientists just learned how to decode what they mean.

Previous gravitational wave recordings of a post-merger black hole resembled a bell — a single tone gradually fading away. But now, research published Thursday in the journal Nature Communications Physics shows that far more is going on. When listening to the waves given off by the black hole’s equator rather than its smoother top, the black hole gives off a series of “chirps” that can reveal the black hole’s shape and behavior.

When black holes of different sizes merge, the final product resembles a lumpy chestnut before smoothing out. As it spins, the rhythm of chirps can reveal the new black hole’s shape.

“When we observed black holes from their equator, we found that the final black hole emits a more complex signal, with a pitch that goes up and down a few times before it dies,” lead author Juan Calderón Bustillo of the ARC Centre of Excellence for Gravitational Wave Discovery said in a press release.

Since directly observing a black hole is hard, learning to decode these chirp signals could help scientists understand what the resulting black holes actually look like.

“We discovered that these signals are far more rich and complex than commonly thought,” Georgia Institute of Technology astrophysicist Christopher Evans said in the release, “allowing us to learn more about the vastly changing shape of the final black hole.”

More on gravitational waves: Astronomers Claim to Have Spotted the Most Massive Black Hole Merger Ever

Yuge
Scientists Discover Enormous Black Hole Right Near Our Galaxy
12. 4. 21
Read More
Cosmic Census: There Could Be 100 Million Black Holes in Our Galaxy Alone
8. 14. 17
Read More
LIGO Just Detected Gravitational Waves From a Second Black Hole Collision!
6. 15. 16
Read More
+Social+Newsletter
TopicsAbout UsContact Us
Copyright ©, Camden Media Inc All Rights Reserved. See our User Agreement, Privacy Policy and Data Use Policy. The material on this site may not be reproduced, distributed, transmitted, cached or otherwise used, except with prior written permission of Futurism. Fonts by Typekit and Monotype.