"Everything about this discovery is mindboggling." 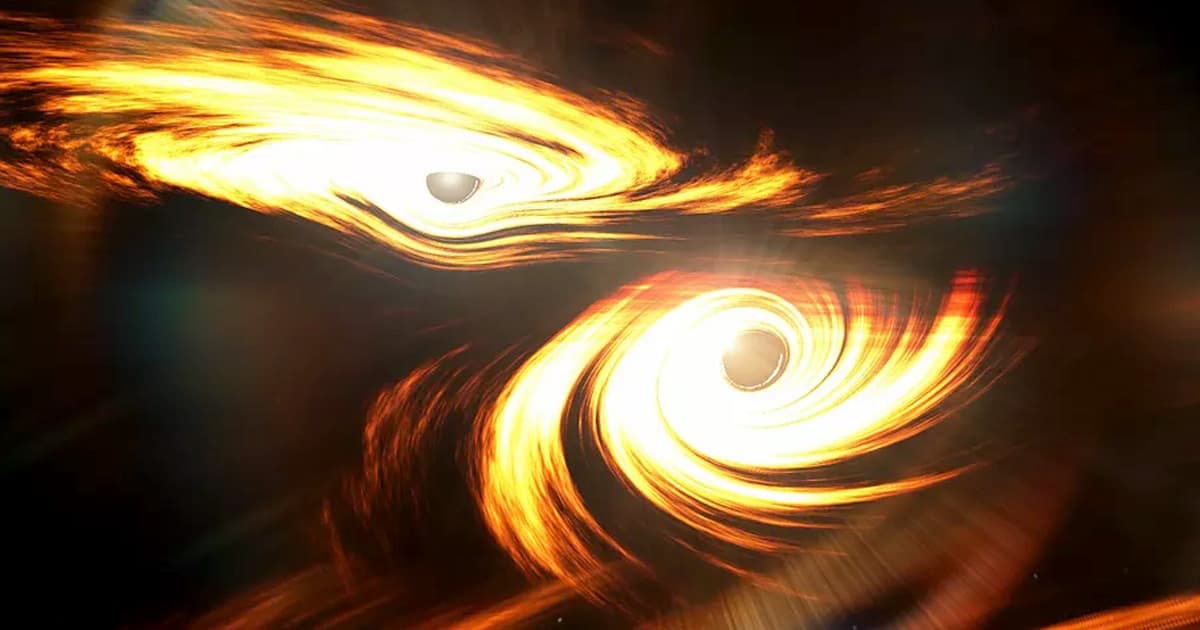 A team of astronomers have spotted what they claim is the most massive collision of two black holes ever observed.

Prior to the gigantic collision, at least one of the massive colossal space objects had the mass of 85 Suns. The collision itself created a black hole about 150 solar masses — putting it into a mass range previously thought to be possible — and ejected the equivalent of eight solar masses in the form of energy in the form of gravitational waves, as detailed in papers published today in the journals Physical Review Letters and The Astrophysical Journal Letters.

"Everything about this discovery is mindboggling," Simon Portegies Zwart, a computational astrophysicist at Leiden University in the Netherlands, who was not involved in the research, said in a Nature statement.

The size of the black holes involved in the merger would make them more massive than a regular star, but lighter than the supermassive black holes often found at the center of galaxies.

The event, which occurred approximately seven billion light years away, was observed in May 2019 using the twin Laser Interferometer Gravitational-wave Antenna (LIGO) detectors in the US and the smaller Virgo observatory in Italy.

The researchers made the discovery by observing gravitational waves, ripples in space-time that can give away these galactic events. The relatively new technique has allowed scientists to make discoveries of dozens of other black hole collisions like it.

But even by the epic standards of black hole collisions, this one takes the cake.

"This doesn't look much like a chirp, which is what we typically detect," Virgo member Nelson Christensen, researcher at the French National Centre for Scientific Research (CNRS), who compared the new results to the first detection of gravitational waves using LIGO dating back to 2015, said in an MIT press release.

"This is more like something that goes 'bang,' and it's the most massive signal LIGO and Virgo have seen," Christensen added.

The masses of the two merging black holes are highly unusual as there is a "mass gap," roughly between 65 and 135 solar masses, where black holes aren't expected to exist. That's because at those sizes, stars theoretically tend to be ripped apart and disintegrated by the explosive fusion of oxygen nuclei, a process known as "pair instability."

"This is quite neatly in the range one would expect the pair-instability mass gap should be," LIGO astrophysicist Christopher Berry of Northwestern University in Evanston, Illinois, said in the Nature statement.

Scientists suspect that at least one of the black holes may not have formed from a collapsing star — the more conventional way smaller black holes are formed.

Another scenario is that smaller black holes could have merged together over time, accumulating into the one involved in this collision. Yet such a theory is hard to back up as we still haven't found any other intermediate black holes.

"That’s why astronomers have been looking for these extensively, because they would help in solving this puzzle,” Salvatore Vitale, an assistant professor at the LIGO Lab of MIT, told The Verge.

"LIGO once again surprises us not just with the detection of black holes in sizes that are difficult to explain, but doing it using techniques that were not designed specifically for stellar mergers," Pedro Marronetti, program director for gravitational physics at the National Science Foundation, said in the MIT press release.

"This is of tremendous importance since it showcases the instrument's ability to detect signals from completely unforeseen astrophysical events," he added. "LIGO shows that it can also observe the unexpected."