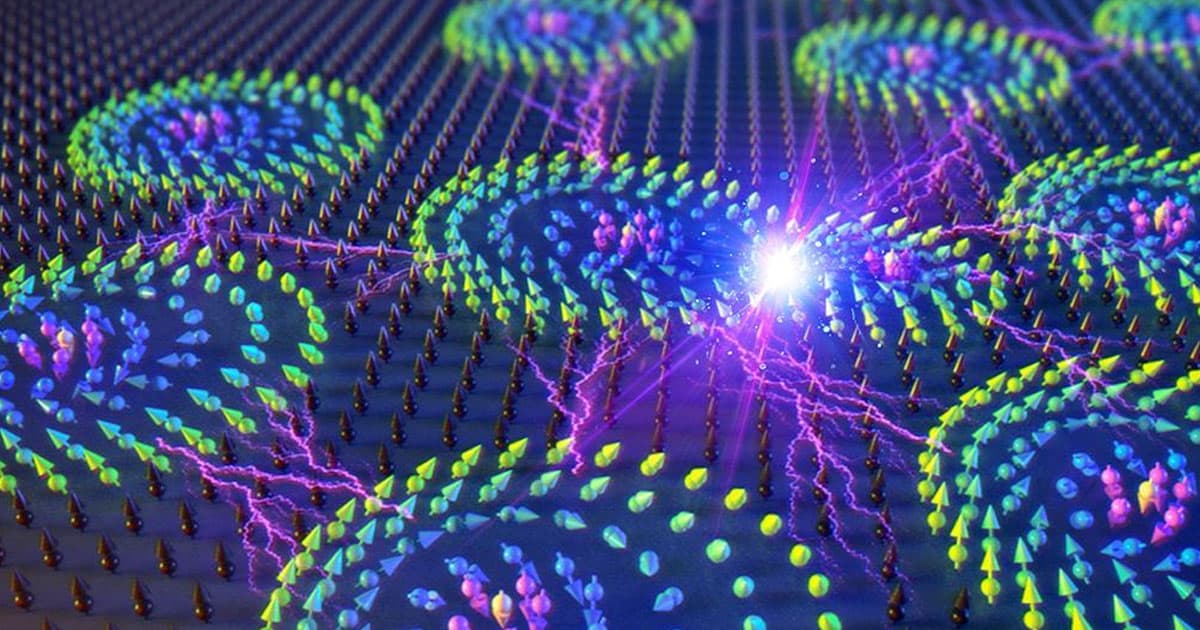 Okay, this is weird. This is very weird.

Okay, this is weird. This is very weird.

For the first time, scientists have found that a bizarre subatomic "quasiparticle," called a skyrmion, that's capable of reproducing itself in an unusual way.

A skyrmion is considered a quasiparticle because it acts like a subatomic particle in many ways, but doesn’t have any mass. In an experiment probing how skyrmions are formed that was published in the journal NANO Letters, a team from the U.S. Department of Energy's Ames Laboratory learned that they actually split in two and reproduce — not unlike a biological cell.

Skyrmions are packets of energy and magnetic forces that self-arrange into patterns resembling the tightly-arranged atoms inside a crystal. Physicists have speculated that manipulating them could lead to breakthroughs in data storage and transfer technology, but there are a lot of remaining questions that would need to be solved.

"In order to integrate skyrmions into future devices, science must have an accurate understanding of their formation mechanism," Ames researcher Lin Zhou said in a press release.

Skyrmion structures can grow through an additive process, in which their crystalline pattern expands outward as new skyrmions are formed, according to the study.

But it's actually preferred — energetically favorable at the nanoscale level — for them to split in two and self-repair, an unprecedented parallel between particle physics and cellular biology.

More on subatomic particles: Physicists Are Crashing Matter Into Antimatter To Hunt for a New Boson

Good Samaritan
Physics Dept Gets Random Box Full of $180K in Untraceable $50s and $100s
12. 22. 21
Read More
Brands We Love
Go Beyond The Science Headlines With The Fundamentals Of Physics Course
8. 13. 20
Read More
Quantum Teleportation
Scientists Are Building a Quantum Teleporter Based on Black Holes
3. 2. 20
Read More
+Social+Newsletter
TopicsAbout UsContact Us
Copyright ©, Camden Media Inc All Rights Reserved. See our User Agreement, Privacy Policy and Data Use Policy. The material on this site may not be reproduced, distributed, transmitted, cached or otherwise used, except with prior written permission of Futurism. Articles may contain affiliate links which enable us to share in the revenue of any purchases made.
Fonts by Typekit and Monotype.