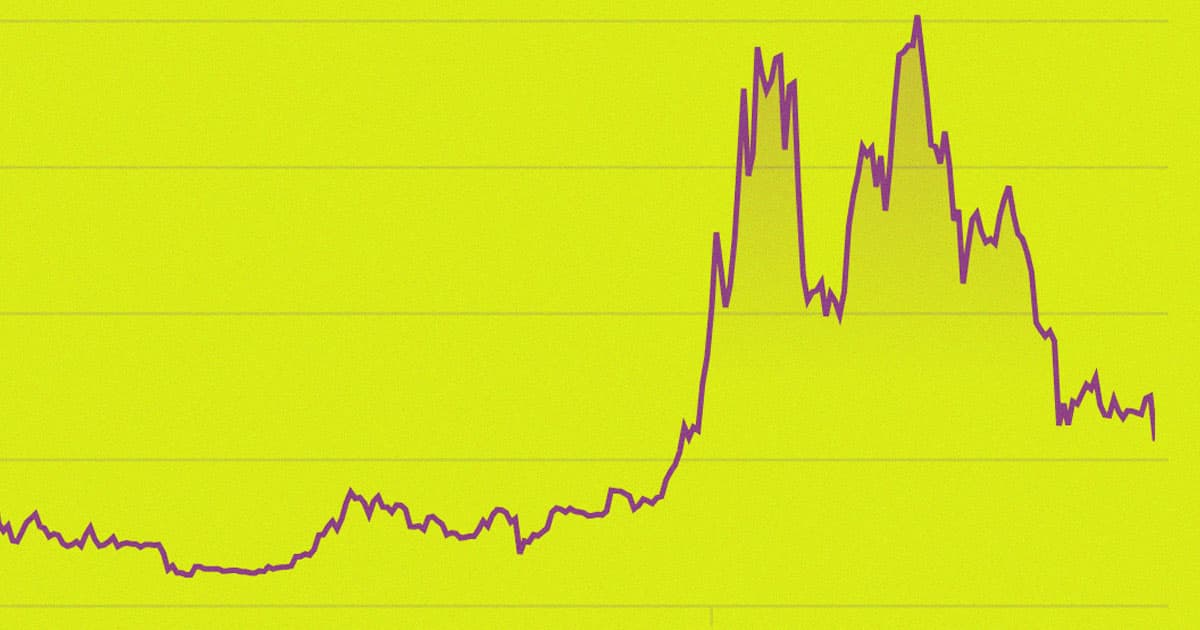 If You Bought Bitcoin in December 2017, You Have Now Lost Money

Cryptocurrencies are in a bad state right now.

Cryptocurrencies are in a bad state right now.

The values of major cryptocurrencies are in a nosedive right now.

Bitcoin has slid nearly ten percent over the past 24 hours, now hovering around $17,000 and marking a two-year low that bookends a rotten year for cryptocurrencies as a whole.

It's a stunning drop of historic proportions. In fact, if you bought Bitcoin in December 2017 — when the token hit its first major spike, briefly reaching nearly $20,000 in value — you're now down on your investment. And that's without getting into folks who bought it when it was worth even more.

Other tokens such as Ether are also in free fall right now, signifying a major downturn.

Investors are likely responding to the news that Binance, the largest exchange by trading volume, has offered to bail out rival exchange FTX, which had imploded in a matter of days — while wiping out 94 percent of billionaire CEO Sam Bankman-Fried's net worth.

The news has clearly rattled the entire cryptocurrency industry.

"It's scary to think that FTX, which is one of the largest crypto exchanges in the world, was bitten by liquidity concerns and Binance, their biggest rival, is coming to their rescue," Dan Raju, CEO of financial services provider Tradier, told Reuters.

The sudden news of an impending acquisition drew the attention from antitrust experts as well, spurring fears of impending regulation amongst investors.

"This [deal is] a textbook horizontal merger of the sort that the antitrust laws in the US and internationally are meant to address," Brandon Kressin, a crypto-focused attorney at Kressin Law Group, told CoinDesk. "I think that the apparent hope they have that excluding the U.S. exchanges from the deal is going to save their deal from antitrust scrutiny is very short sighted."

While cryptocurrencies such as Bitcoin or Ether rallied on Tuesday directly following the news, their values then started falling again, wiping out those gains in a matter of hours.

FTX's token FTT unsurprisingly has also been dealt a devastating blow, losing roughly 80 percent of its value since Monday.

And the plunge is still ongoing as of Wednesday morning, with major tokens stumbling even further, suggesting a prolonged period of uncertainty.

All the chaos underlines the tech's seemingly inherent volatility — and the fact that even holding on to your investments for years isn't always guaranteed to pay off.

More on FTX: Crypto Billionaire Loses 94 Percent of His Wealth in One Day

Moving Money
Crypto.com Accidentally Sent $400 Million to a Competitor
Nov 14
Read More
Crypto Inferno
Bitcoin Mining as Bad for Planet as Oil Drilling, Scientists Say
Oct 1
Read More
Staking Ether
Oops! Ethereum's Merge May Cause Huge Problems With the SEC
Sep 19
Read More
+Social+Newsletter
TopicsAbout UsContact Us
Copyright ©, Camden Media Inc All Rights Reserved. See our User Agreement, Privacy Policy and Data Use Policy. The material on this site may not be reproduced, distributed, transmitted, cached or otherwise used, except with prior written permission of Futurism. Articles may contain affiliate links which enable us to share in the revenue of any purchases made.
Fonts by Typekit and Monotype.