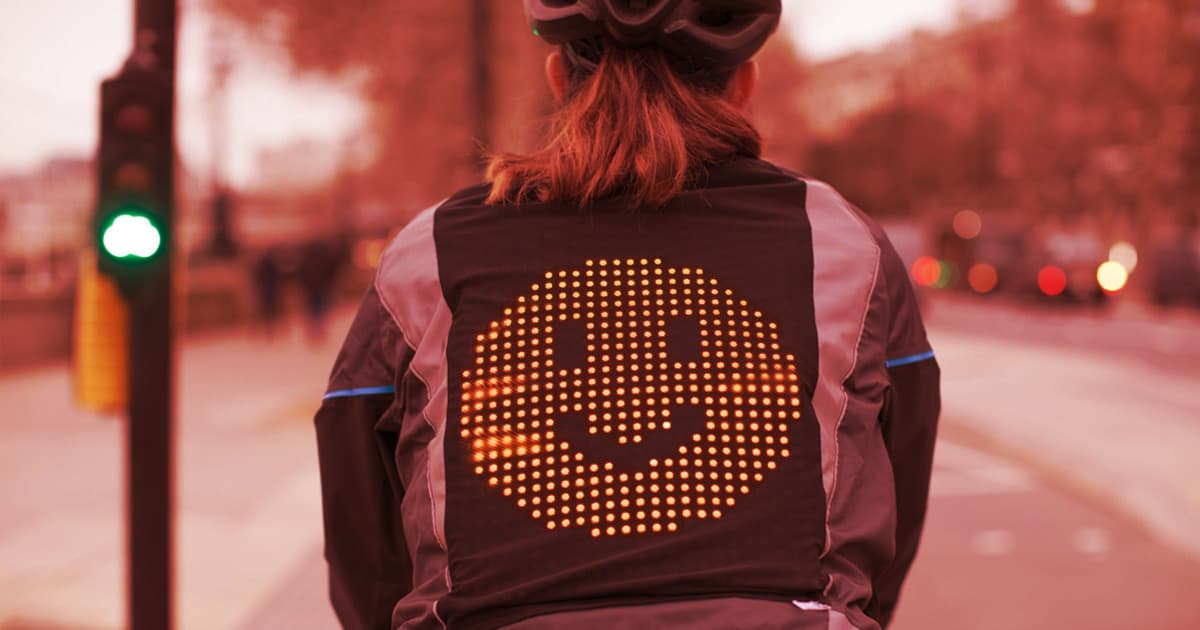 The idea is to give cyclists a way to communicate with cars.

The idea is to give cyclists a way to communicate with cars.

Multinational automaker Ford has devised a clever way to decrease the chances of accidents between cyclists and drivers: a jacket that displays emoji in LEDs on its back.

The Emoji Jacket prototype, which Ford unveiled Thursday as part of its ongoing "Share The Road" campaign, has a large LED array on the back that can display one of six emoji at a time: 🙂 🙁 😐 ⚠️ ◀️ ▶️

A cyclist uses a wireless remote attached to the handlebars of their bike to choose the emoji they want to display, the idea being that they would no longer need to remove their hands from the bike to communicate with others on the road.

So far, Ford has only created one of the jackets, and there's nothing to indicate that the company plans to begin mass-producing them.

However, the prototype does demonstrate how a deceptively simple idea could actually save lives.

"[A]ll too often between drivers and cyclists, [communication] just comes down to the beeping of a horn or a rude gesture," Emmanuel Lubrani, Ford of Europe's senior manager, brand communications and content development, said in a blog post. "The Emoji Jacket uses a universally understood means of communication to show one way in which tensions could be eased — and we all learn to 'Share The Road.'"

READ MORE: Ford’s biking jacket shows emoji to everyone behind you [Engadget]

Brands We Love
This Ultra-Advanced Electric Bike Offers the Best of All Worlds
7. 9. 20
Read More
Halfbike is Reimagining a 200-Year Old Transportation Technology
9. 18. 18
Read More
Bring the Noise: Why Electric Vehicles Need to Make More Sound, Right Now
5. 10. 18
Read More
+Social+Newsletter
TopicsAbout UsContact Us
Copyright ©, Camden Media Inc All Rights Reserved. See our User Agreement, Privacy Policy and Data Use Policy. The material on this site may not be reproduced, distributed, transmitted, cached or otherwise used, except with prior written permission of Futurism. Articles may contain affiliate links which enable us to share in the revenue of any purchases made.
Fonts by Typekit and Monotype.