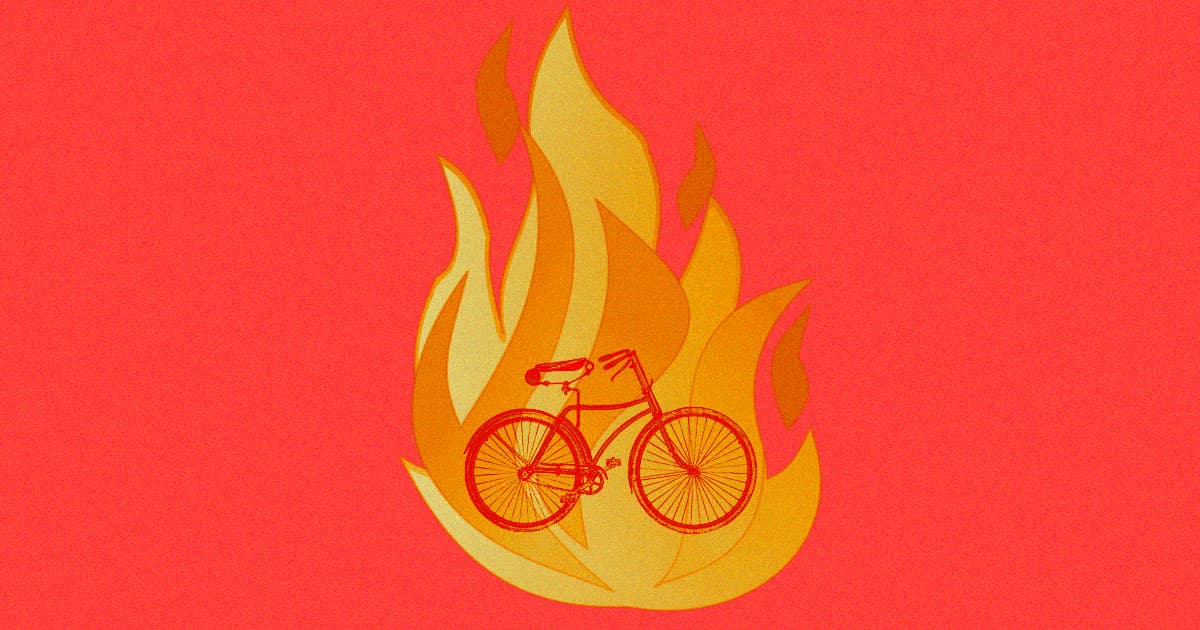 Lyft Suspends SF E-Bikes Because They're Bursting Into Flames

City supervisor: "The last thing you need is a flaming bike as you’re riding down the street."

City supervisor: "The last thing you need is a flaming bike as you’re riding down the street."

In April, the company pulled its e-bikes in the city because their sensitive brakes were sending riders flying over the handlebars. Lyft then sued San Francisco in early June over a contract dispute, delaying the return of the bikes until the pair reached a temporary resolution earlier this month.

And now, just two weeks after redeploying its e-bikes in the Bay Area, Lyft is pulling them again — this time because they're spontaneously catching fire.

On Wednesday, the San Francisco Examiner wrote that at least two of Lyft's e-bikes have apparently caught fire in the past week.

A source who wished to remain anonymous witnessed one of the fires on Wednesday, while San Franciscan Zach Rutta tweeted a photo of the charred remains of the other on Saturday.

The San Francisco Fire Department responded to Wednesday's incident and determined that it was a "battery pack issue," spokesperson Jonathan Baxter told the SF Examiner.

Lyft said in a statement that it is "temporarily making the e-bike fleet unavailable to riders while we investigate and update our battery technology." However, it didn't clarify whether it will pull all of the e-bikes from the streets or leave them parked but disabled.

The latter option could prove unwise given that both fires appeared to occur when the e-bikes weren't in use. But as Supervisor Vallie Brown pointed out to the SF Examiner, a parked e-bike catching fire is better than the alternative.

"Biking alone can be hard and unsafe," she said. "The last thing you need is a flaming bike as you’re riding down the street."

More on Lyft: Uber and Lyft Caused Half of San Francisco’s New Traffic Congestion Since 2010

Xxplosive
Electric Bikes Have a Small Problem: They Keep Bursting Into Flames
10. 31. 22
Read More
Brands We Love
These Innovative E-Bikes Are Revolutionizing the Way Americans Travel
11. 30. 18
Read More
It’s Not Uber’s Fault That NYC’s Public Transportation Sucks
7. 24. 18
Read More
+Social+Newsletter
TopicsAbout UsContact Us
Copyright ©, Camden Media Inc All Rights Reserved. See our User Agreement, Privacy Policy and Data Use Policy. The material on this site may not be reproduced, distributed, transmitted, cached or otherwise used, except with prior written permission of Futurism. Articles may contain affiliate links which enable us to share in the revenue of any purchases made.
Fonts by Typekit and Monotype.