Electric Bikes Have a Small Problem: They Keep Bursting Into Flames 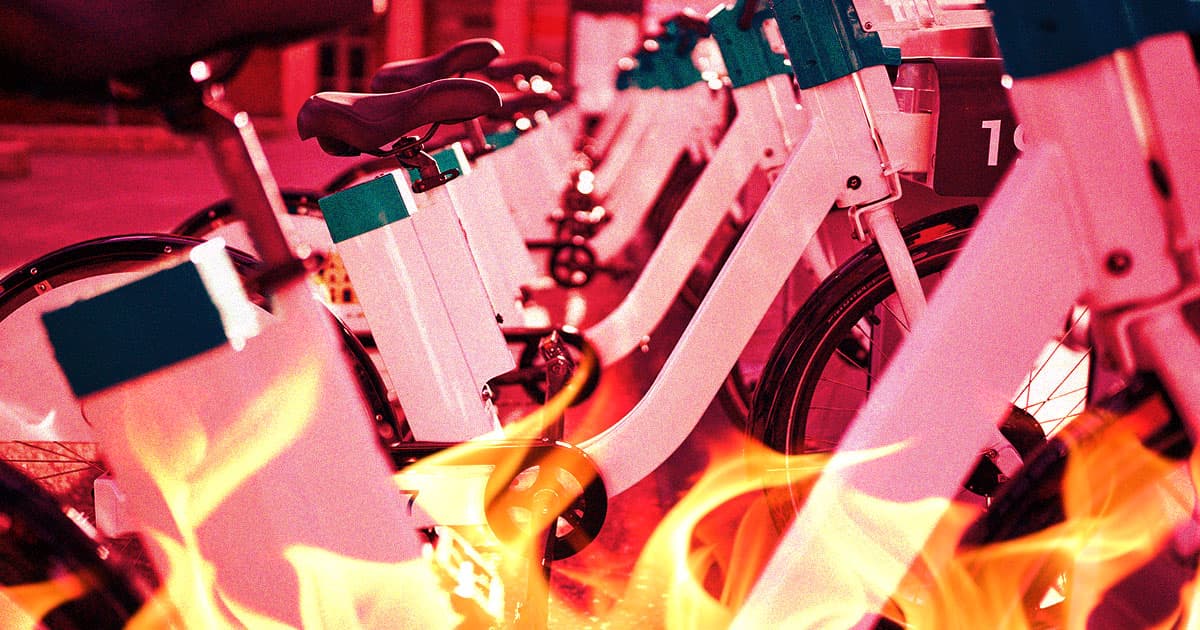 Electric bicycles are meant to be a boon for green transit — but their occasionally volatile batteries are causing issues both in terms of actual safety and the realm of public perception.

As NPR notes in a gutting new story about the risk of e-bike battery fires, the Fire Department of New York has investigated 174 battery fires so far in 2022, which is going on double from 2021, and quadruple from 2020.

The primary factor in these fires is the e-bikes' lithium ion batteries, combined with the fallibility of charging equipment. While the chargers are supposed to turn off once fully charged, sometimes they don't, sometimes resulting in disaster.

The batteries have also been known to leak electrolytes from the battery's core, which can sets off a dangerous chain reaction resulting in a blaze.

"These bikes when they fail, they fail like a blowtorch," Dan Flynn, the FDNY's chief fire marshal, told NPR. "We've seen incidents where people have described them as explosive — incidents where they actually have so much power, they're actually blowing walls down in between rooms and apartments."

In NYC, the e-bike fire problem is linked by residents' growing hunger for delivery, which has fueled the bikes' meteoric rise.

Indeed, as NPR notes, a sizable number of the e-bike battery fires involve e-bikes owned by delivery workers, whose long hours can weaken the batteries and make them take longer to charge. Some can take up to eight hours to charge once worn down, and it's impossible to watch them for that entire time — especially on a delivery worker's grueling schedule.

Buying a new battery once an old one has gotten beat up can get expensive, so many delivery workers who own e-bikes will, as the report notes, choose instead to buy cheaper refurbished batteries that are often swapped interchangeably for others and are, some advocates say, more likely to explode or cause fires.

While NYC officials are proposing solutions — such as Mayor Eric Adams' promise to direct $1 million to delivery worker centers where they can safely charge their e-bikes and a city council proposal to ban the sale of used batteries within city limits — these pragmatic New Yorkers know the government by itself won't fix the growing danger from e-bike battery fires.

"They do, you know, God's work, so to speak, because New Yorkers like to have food delivered," New York City Councilmember Gale Brewer, who sponsored the used battery ban, told NPR. "So now the question is how do they get the new batteries that are not going to cause fires?"

It's a provocative question, and one that needs to be answered quickly, given that use of the vehicles is spiking every year.

Read This Next
Fiery Furnaces
Firefighters Struggle as Junkyard Tesla Bursts Into Flames Weeks After Crash
Brands We Love
These Innovative E-Bikes Are Revolutionizing the Way Americans Travel
More on Advanced Transport
Out With a Bang
Yesterday on the byte
Driver Says His Ford F-150 Lightning Made a "Loud Boom" and Died When He Plugged It In
Deep in a Hole
Yesterday on the byte
Something Very Weird Is Going on at Elon Musk's Boring Company
Pizza Personnel
Nov 23 on the byte
Domino's Buying Hundreds and Hundreds of Electric Delivery Vehicles
READ MORE STORIES ABOUT / Advanced Transport
Keep up.
Subscribe to our daily newsletter to keep in touch with the subjects shaping our future.
+Social+Newsletter
TopicsAbout UsContact Us
Copyright ©, Camden Media Inc All Rights Reserved. See our User Agreement, Privacy Policy and Data Use Policy. The material on this site may not be reproduced, distributed, transmitted, cached or otherwise used, except with prior written permission of Futurism. Articles may contain affiliate links which enable us to share in the revenue of any purchases made.
Fonts by Typekit and Monotype.