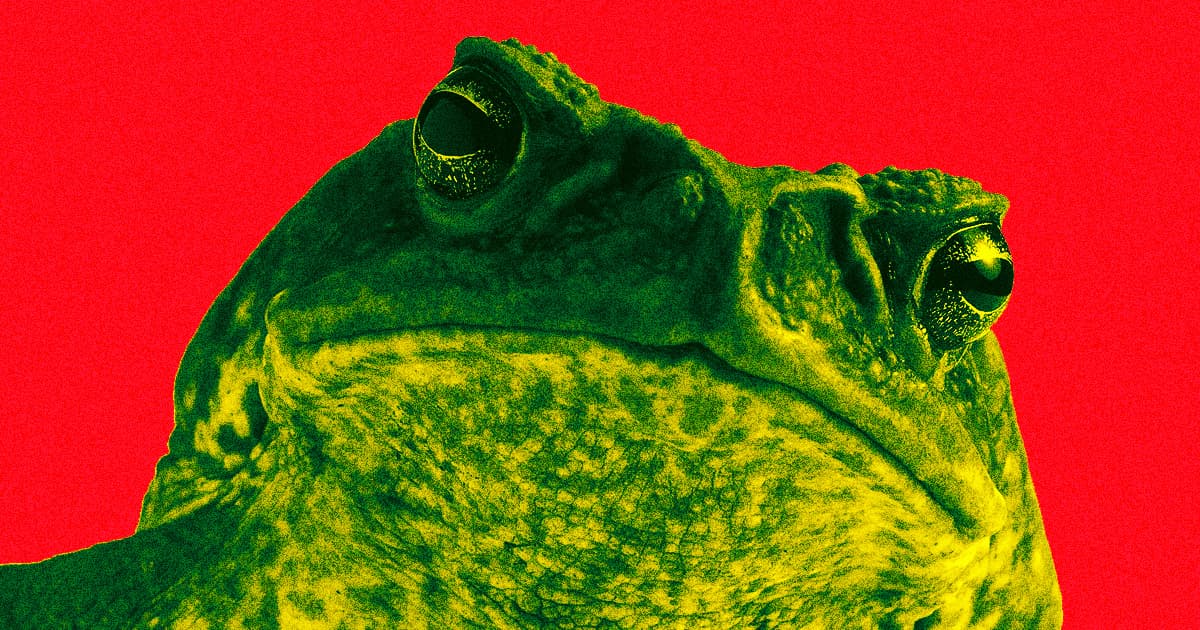 Justice for Toadzilla, may we forever stan.

Justice for Toadzilla, may we forever stan.

A new amphibious critter, named "Toadzilla" by its discoverers, has been crowned as the world's largest known toad, clocking in at roughly 6 pounds — that's about six times the average for its species, the already-chonky cane toad.

"I reached down and grabbed the cane toad and couldn't believe how big and heavy it was," the toad's discoverer, park ranger Kylee Gray, said in a press release. "We dubbed it Toadzilla, and quickly put it into a container so we could remove it from the wild."

"We believe it's a female due to the size," she added, because "female cane toads do grow bigger than males."

A remarkable accomplishment for the wart-covered lass! Which, sadly, brings us to the bad news: our hefty heroine's story has already come to an untimely end. Cane toads are a notoriously destructive invasive species to Australia, and when park rangers in Queensland, Australia's Conway national park found her out, she was donezo.

Experts believe it could be the largest toad of its kind ever discovered. pic.twitter.com/gAXhQr1uAf

That said, while cane toads have certainly wreaked havoc on Australian wildlife — they're very poisonous and have caused the local extinction of several native predators — it's really not their fault. Cane toads were brought to the Oceanic nation by Australian officials, who hoped that the lumpy froggos would eat beetles that, at the time, were destroying the country's sugarcane crops.

Clearly an ill-informed plot, considering that the toads' population, which began with a relatively measly 2,400 of them, has grown exponentially. By one recent World Wildlife Fund estimate, there are roughly 200 million cane toads living in Australia. And apparently, they're not very picky eaters — especially a big'un like Toadzilla.

"A cane toad that size will eat anything it can fit into its mouth," Gray added in the statement, "and that includes insects, reptiles and small mammals."

To Australia's credit, killing invasive species — which are horrible for native ecosystems — is indeed the only practical solution.

Still, we're sad. Toadzilla didn't mean to be in Australia. She was only there because Aussie authorities put her great-great-grandparents on the continent to begin with. Our thoughts are with this chonky queen, forced to atone for crimes that she didn't commit. May she rest in poisonous toad peace.

READ MORE: Australian park rangers discovered a giant, toxic toad that eats anything that fits into her mouth. They named her Toadzilla. [Insider]

Charlotte's Web
Experts Say That Those Giant Spiders Falling From the Sky Are Good, Actually
3. 10. 22
Read More
Fire Starters
Australia Arrests Dozens for Starting Bushfires on Purpose
1. 7. 20
Read More
Three Seasons
By 2050, Winter Will No Longer Exist in Australia, Say Researchers
3. 12. 19
Read More
+Social+Newsletter
TopicsAbout UsContact Us
Copyright ©, Camden Media Inc All Rights Reserved. See our User Agreement, Privacy Policy and Data Use Policy. The material on this site may not be reproduced, distributed, transmitted, cached or otherwise used, except with prior written permission of Futurism. Articles may contain affiliate links which enable us to share in the revenue of any purchases made.
Fonts by Typekit and Monotype.