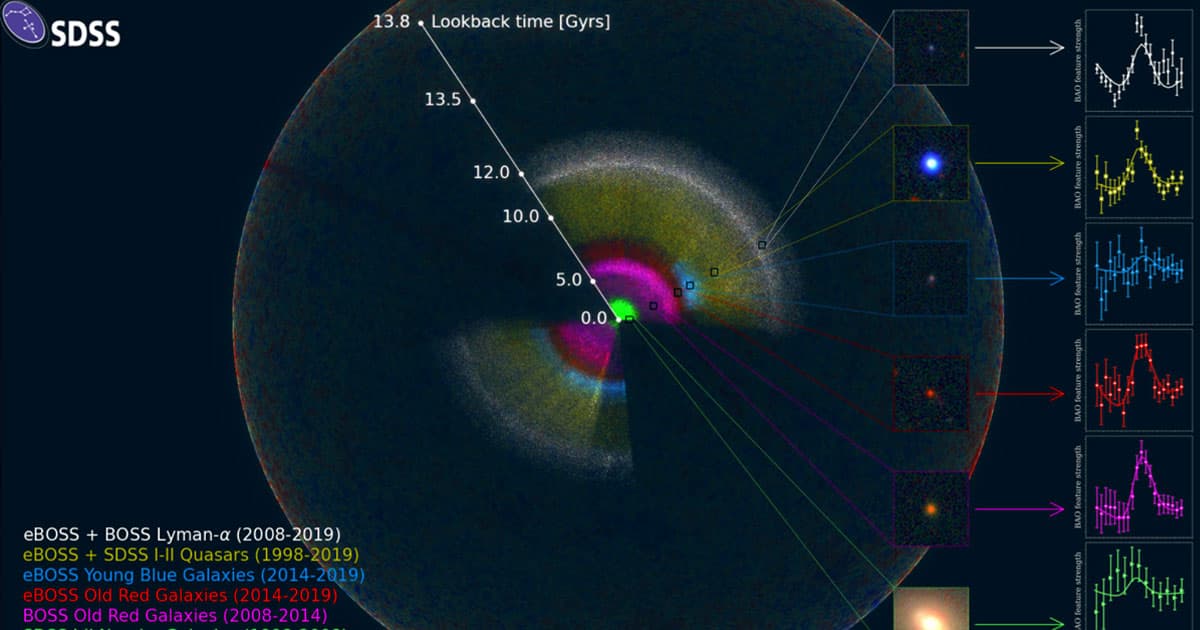 Astronomers Release Largest Map of the Universe in History

It's the "complete story of the expansion of the universe."

It's the "complete story of the expansion of the universe."

After two decades of work, a giant team of astronomers unveiled their pièce de résistance: the most comprehensive map of the universe ever assembled.

The map spans back over 12 billion years into the history of the universe, CNET reports. To build it, astronomers relied on data from the Sloan Digital Sky Survey (SDSS) and analyzed more than 4 million galaxies and quasars. And in doing so, they may help settle a major debate in the astronomy community over how fast the universe is growing.

Will Percival, a researcher from Canada's University of Waterloo who worked on the map, called the project "the complete story of the expansion of the universe" in an SDSS press release.

A key part of that story happened about six billion years ago, according to the project's data. The map suggests that right around that point in time, the rate at which the universe was expanding accelerated rapidly.

The rate of the universe's expansion, the Hubble Constant, is a touchy subject among astronomers: Theoretical calculations for the value have long disagreed with actual observations, puzzling experts. With this new map, the SDSS team believes they may have resolved that mismatch by determining that the universe actually sped up at a specific moment rather than expanding constantly.

"Only with maps like ours," University of Oxford researcher Eva-Maria Mueller said in the release, "can you actually say for sure that there is a mismatch in the Hubble Constant."

More on space maps: This X-Ray Map of the Entire Sky Is a Psychedelic Dreamworld