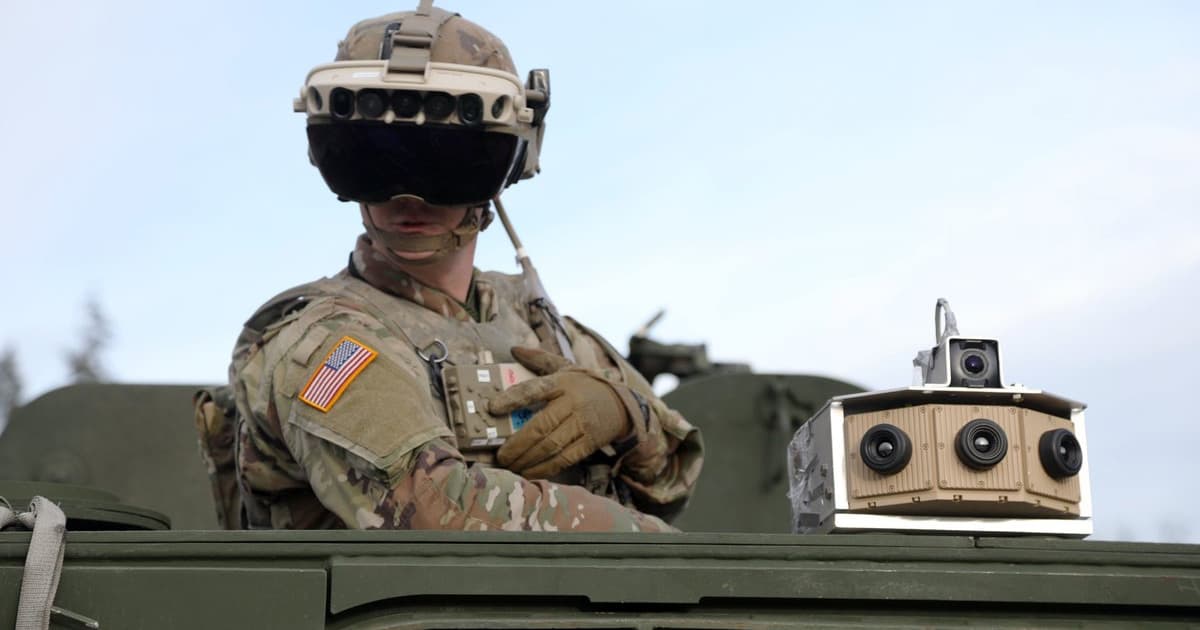 The US Army's New Goggles Could Let Soldiers See Around Corners

These pricey goggles could be a game changer for US infantry.

These pricey goggles could be a game changer for US infantry.

The US Army is hard at work on a new pair of hi-tech goggles that allows infantry to see in the dark and even see around corners, Popular Mechanics reports.

The goggles, called the Integrated Visual Augmentation System (IVAS), incorporate a feed from a variety of cameras mounted to the front of the goggles.

The goggles can also incorporate feeds from other omnidirectional cameras mounted in other other places. For instance, cameras attached to the outside of armored vehicles could allow soldiers to effectively "see" through the walls of the vehicle.

The system can also display other information, including maps and objectives.

"In the past, as the Soldier in the back who's going to actually be dismounting on the objective you may have a single screen to look at that can maybe toggle between the driver’s view or the commander's view, or the gunners view, or perhaps you're looking through periscope blocks or asking the crew themselves what is actually happening around you," sergeant first class Josuha Braly said in a statement.

"But overall when you are buttoned up in the back of a platform you have very limited situational awareness to what you’re walking into," Braly said.

The goggles could even be mounted to a specially-designed night vision scope that's attached to a soldier's rifle. By pointing the rifle around a corner, the soldier could theoretically see around corners, even at night.

The Army has put in a whopping $1.1 billion order to buy 40,000 of them, roughly one for every frontline soldier in the Army, according to PopMech.

Congress, however, scaled the order back and cut the requested budget by 20 percent back in December, according to the Army Times.

From Our Partners
Save on Science Toys And DIY Kits During This Pre-Black Friday Sale
11. 14. 21
Read More
From Our Partners
Augmented Reality Eyewear Is The Future, And It Is Not Too Far Off
10. 28. 21
Read More
From Our Partners
Teach Kids The Joys Of Geography With 15% Off This AR Globe
9. 29. 21
Read More
+Social+Newsletter
TopicsAbout UsContact Us
Copyright ©, Camden Media Inc All Rights Reserved. See our User Agreement, Privacy Policy and Data Use Policy. The material on this site may not be reproduced, distributed, transmitted, cached or otherwise used, except with prior written permission of Futurism. Articles may contain affiliate links which enable us to share in the revenue of any purchases made.
Fonts by Typekit and Monotype.