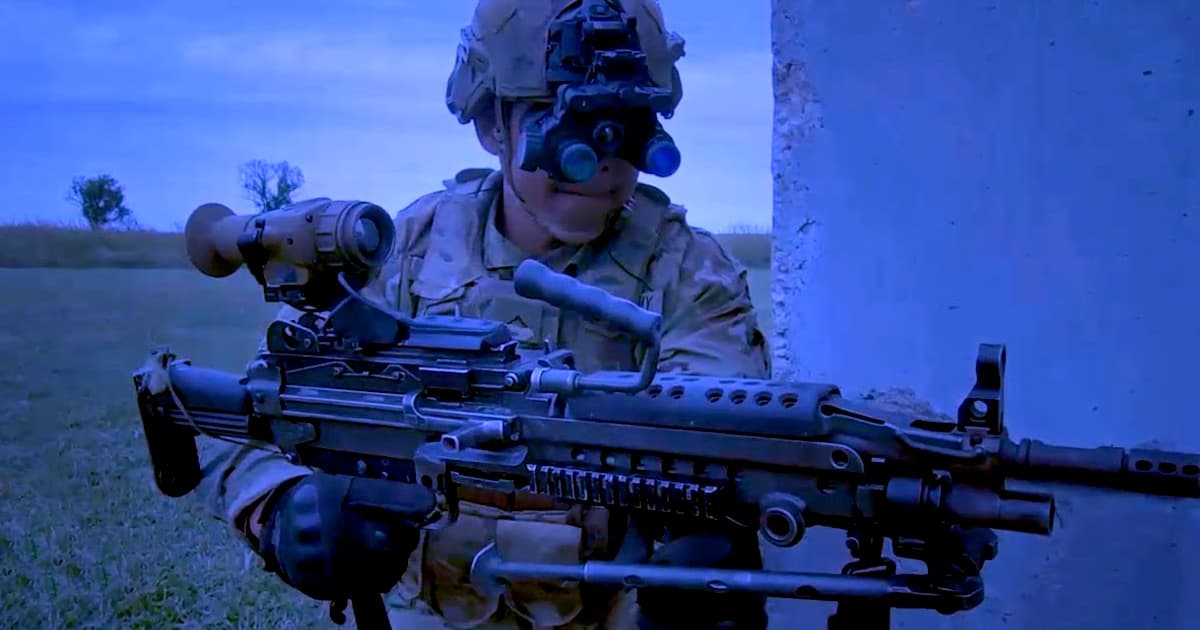 It's like shooting from the hip — but with deadly accuracy.

It's like shooting from the hip — but with deadly accuracy.

The US Army recently showed off its latest night vision goggles — and they're straight out of a video game.

A video, as spotted by The Warzone, shows soldiers firing M4 carbines straight from the hip, without looking into the gun's sights, in the middle of the night. That's thanks to a first-person feed of what the gun is pointing at being sent directly to to the night vision goggles.

The Enhanced Night Vision Goggle-Binocular combines an image intensifier, a vacuum tube that increases the intensity of available light, and a thermal imaging sensor. The resulting video feed is stunningly detailed and allows soldiers to make out individual targets with ease.

Thanks to the feed, soldiers can even point their rifles around corners and get a glimpse of what's ahead on the battlefield. The goggles also allow their wearer to seamlessly switch between the feed and the primary view of the goggles themselves.

According to the goggles' maker L3Harris Technologies, additional information could be piped into the goggles' view, effectively turning it into a heads-up display. For instance, soldiers could keep track of drones in the sky to identify targets in the distance.

It's not the only augmented reality vision system the Army has been working on. The Pentagon has also been funding the Integrated Visual Augmentation System, which is being built on a custom version of Microsoft’s HoloLens augmented reality headset.

READ MORE: The View Through The Army's New Night Vision Goggles Looks Straight Out Of A Video Game [The Drive]

FROM THE DEPT. OF THINGS TO BUY
SiOnyx Aurora Pro Night Vision Camera Review: My Secret Late-Night Adventuring Tool
Oct 28
Read More
IBM Patents Technology That Can Add Night Vision To Your Glasses
6. 15. 16
Read More
Lunar RGB
NASA Shows Off Artemis "Party Mode," Powered by Amazon (TM) Alexa (TM)
Yesterday
Read More
+Social+Newsletter
TopicsAbout UsContact Us
Copyright ©, Camden Media Inc All Rights Reserved. See our User Agreement, Privacy Policy and Data Use Policy. The material on this site may not be reproduced, distributed, transmitted, cached or otherwise used, except with prior written permission of Futurism. Articles may contain affiliate links which enable us to share in the revenue of any purchases made.
Fonts by Typekit and Monotype.