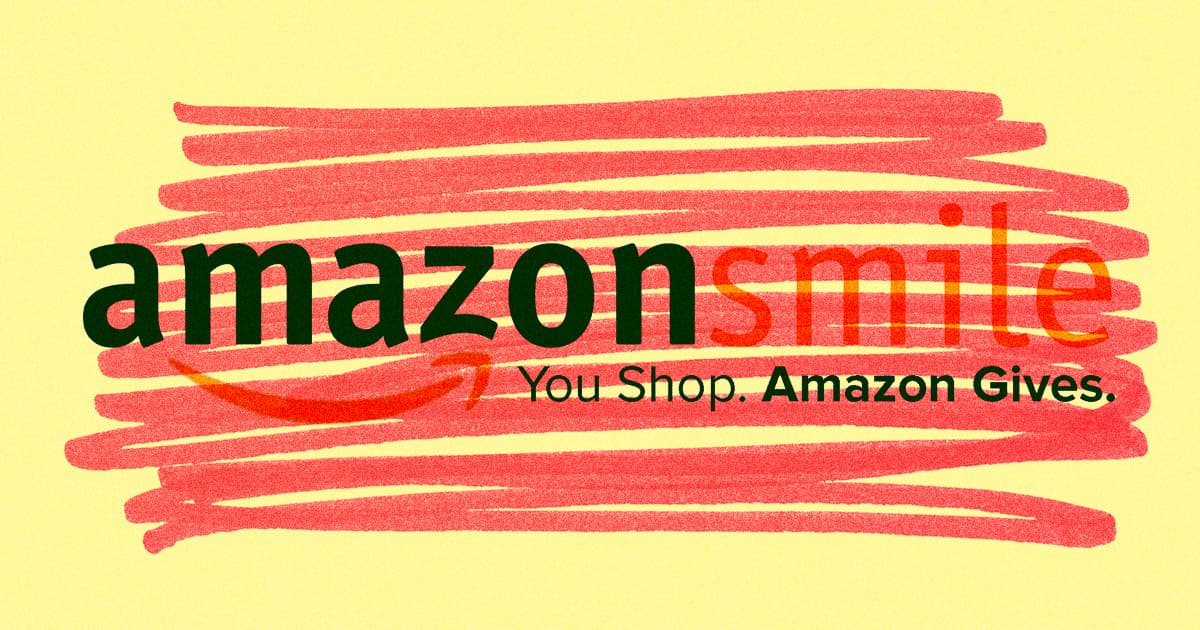 "The program has not grown to create the impact that we had originally hoped."

"The program has not grown to create the impact that we had originally hoped."

Look, there's not much about the Amazon business model that has ever instilled a "this is definitely good for the environment and/or the people who work there" feeling.

But AmazonSmile was different. The company's longtime charity donation program allowed users to donate a percentage of their purchase to eligible charities of their choice.

Unfortunately, the feature, a bright spot in Amazon's otherwise seriously dystopian system, is coming to an end — and according to Amazon, it's because it didn't generate quite enough cash to make a difference.

"After almost a decade, the program has not grown to create the impact that we had originally hoped," reads the company's statement. "With so many eligible organizations — more than 1 million globally — our ability to have an impact was often spread too thin."

Reading between the lines, the Jeff Bezos-founded company — which has collected and distributed upwards of $500 million dollars to countless charities through AmazonSmile — thinks that its money would be better spent by giving millions or even billions of dollars to charities of its choice, as opposed to handing millions of smaller charities much smaller amounts of money.

"The company... will continue to pursue and invest in other areas where it can make meaningful change," the company added, "from building affordable housing to providing access to computer science education for students in underserved communities."

Wow. @amazon is axing its AmazonSmile program, which allowed Amazon customers to have the company contribute a portion of proceeds from sales to the charity of their choice. Imagine a lot of nonprofits are going to take a hit from this move. $AMZN pic.twitter.com/clbCx3usBn

What About the Horses

The timing is interesting, to say the least. Amazon's decision to sunset AmazonSmile is backdropped by a broader company effort to cut costs, which is perhaps best exemplified by its recent decision to slash a staggering 18,000 jobs.

And while Amazon's argument for more consolidated philanthropic spending does have some merit, small donations are still the backbone of most charitable organizations out there.

"Amazon claims the AmazonSmile program didn't have an impact," tweeted The Squirrelwood Equine Sanctuary, a Hudson Valley-based animal sanctuary. "I can tell you as an animal not for profit it made a huge difference to us."

In short, Amazon has a big hole to fill now. It's sad to see AmazonSmile — which did in fact have a huge impact by putting a bit of philanthropic power into the hands of its users — disappear.

More on where Jeff Bezos prefers to spend his money: Jeff Bezos Heads Toward Space, Turns Back Before He Gets There

Poker? I barely...
Elon Musk Hired A Professional Gambler to Manage His Philanthropic Donations
2. 17. 22
Read More
Hidden Motives
Elon Musk May Have Donated $6 Billion to Fight World Hunger, But Nobody Seems Sure
2. 16. 22
Read More
Company Town
Amazon Pays for High School Class About How to Be an Amazon Grunt
1. 26. 22
Read More
+Social+Newsletter
TopicsAbout UsContact Us
Copyright ©, Camden Media Inc All Rights Reserved. See our User Agreement, Privacy Policy and Data Use Policy. The material on this site may not be reproduced, distributed, transmitted, cached or otherwise used, except with prior written permission of Futurism. Articles may contain affiliate links which enable us to share in the revenue of any purchases made.
Fonts by Typekit and Monotype.