A "Black Hole Ring" May Surround Our Galaxy: 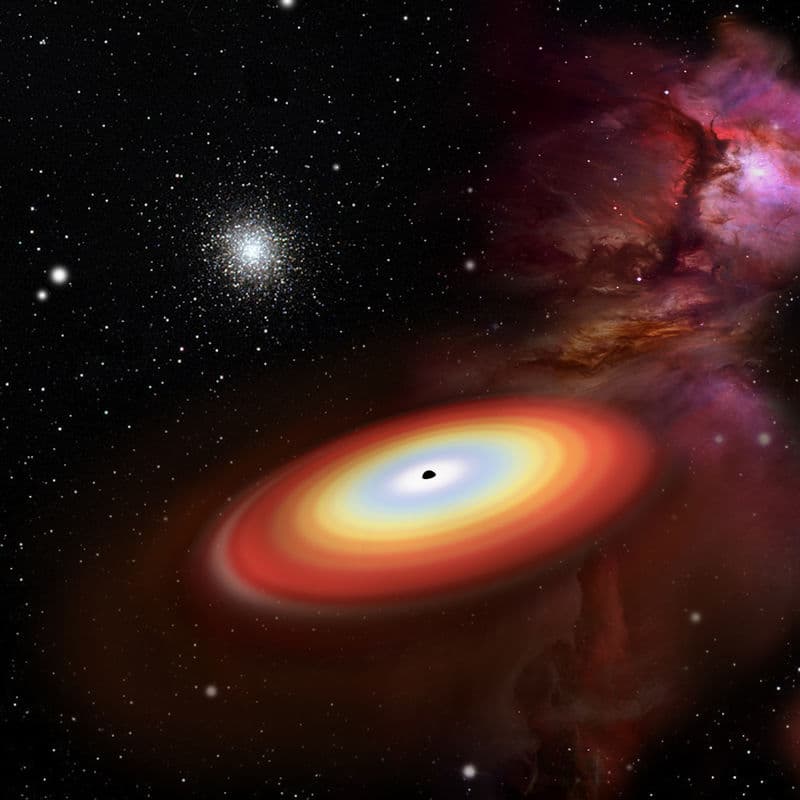 Scientists believe that outcast black holes (black holes that were ejected from their respective galaxies) live on the outskirts of the Milky Way—surrounding our galaxy in a massive halo.

But before we get into our halo of black holes, let's delve a little more into these amazing cosmic objects. First, there are three types of black holes:

We currently believe that when small galaxies collide, and eventually merge, their combined gravitational force binds them together. As this occurs, the two black holes also converge, forming one (exceedingly massive) black hole. Over billions of years, this process continues until gigantic elliptical galaxies come to fruition, with black holes in the center of each one that grow by "feeding" on others (think of it as galactic cannibalism).

This, of course, is only one scenario, but it remains the most popular and widely accepted hypothesis regarding what happens to massive black holes when galaxies collide; however, scientists  have another idea that, if correct, could potentially have frightening implications. Researchers at UCSC ran galaxy evolution computer simulations, and something previously unknown came to light: When two galaxies combine, the larger black hole may sometimes boot out the smaller one.

It's believed that, in planetary systems, this kind of thing is common. Often, the larger planets form farther out, and a gravitational perturbation—like a tussle with other large planets—may send these massive planets spiraling inward, consequently kicking inner-orbiting planets out; it has been suggested that, at some point in time, our solar system underwent a similar experience, where it ultimately lost a fifth gas giant.

The simulations, which were run by Valery Rashkov and Piero Madau of the University of California, Santa Cruz, show that there may be between 70 and 2,000 of these remnant black holes, each millions of years old forming a "ring" around our Milky Way.

These black holes are colliding with each other and forming even larger black holes. The problem, as the UCSC team notes, is that these black holes are impossible to detect. Because of the nature of black holes themselves, we can not see them directly, we can infer they are present based on the manner in which they interact with their surroundings, namely, when they are actively consuming material (or siphoning gas from stars that lurk nearby). With these black holes specifically, there isn't enough material in intergalactic space for them to flare up, therefore, they are indistinguishable from space itself.

The paper, called "A Population of Relic Intermediate-Mass Black Holes in the Halo of the Milky Way" can be found here. Read the abstract below:

If "seed" central black holes were common in the subgalactic building blocks that merged to form present-day massive galaxies, then relic intermediate-mass black holes (IMBHs) should be present in the Galactic bulge and halo. We use a particle tagging technique to dynamically populate the N-body Via Lactea II high-resolution simulation with black holes, and assess the size, properties, and detectability of the leftover population.

The method assigns a black hole to the most tightly bound central particle of each subhalo at infall according to an extrapolation of the M_BH-sigma_* relation, and self-consistently follows the accretion and disruption of Milky Way progenitor dwarfs and their holes in a cosmological "live" host from high redshift to today. We show that, depending on the minimum stellar velocity dispersion, sigma_m, below which central black holes are assumed to be increasingly rare, as many as ~2000 (sigma_m=3 km/s) or as few as ~70 (sigma_m=12 km/s) IMBHs may be left wandering in the halo of the Milky Way today.

The fraction of IMBHs kicked out of their host by gravitational recoil is < 20%. We identify two main Galactic subpopulations, "naked" IMBHs, whose host subhalos were totally destroyed after infall, and "clothed" IMBHs residing in dark matter satellites that survived tidal stripping. Naked IMBHs typically constitute 40-50% of the total and are more centrally concentrated. We show that, in the sigma_m=12 km/s scenario, the clusters of tightly bound stars that should accompany naked IMBHs would be fainter than m_V=16 mag, spatially resolvable, and have proper motions of 0.1-10 milliarcsec per year.

Their detection may provide an observational tool to constrain the formation history of massive black holes in the early Universe.