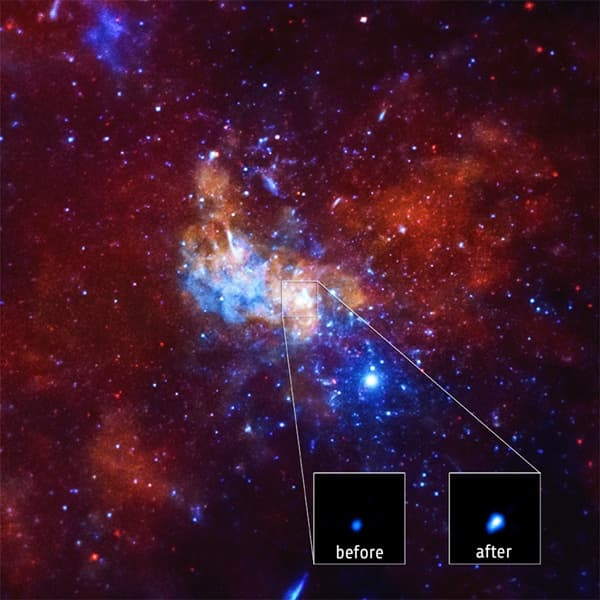 There is a  monster lurking at the center of our galaxy. It is known as Sagittarius A*. This beast is a black hole that is a staggering 4.5 million times bigger than our Sun. It may sound mind-blowingly large; however, as far as black holes go, it's certainly not the largest. For example, the black hole in the center of NGC 1277, a small galaxy that is some 250 million light-years from Earth, has a mass that is equivalent to 17 billion suns (meaning that this black hole makes up 14% of its galaxy's total mass).

Yet, Sagittarius A* is still quite impressive, as the latest news from NASA reveals.

In September of 2013, the Chandra X-Ray space observatory recorded an X-ray flare from the center of our galaxy's black hole that was some 400 times brighter than the energy that we usually see streaming from this region. This "megaflare" was nearly three times brighter than the previous brightest X-ray flare that was observed from Sgr A* (this previous record holder was seen in early 2012). According to NASA, this mysterious flareup "raises questions about the behavior of this giant black hole and its surrounding environment."

However, scientists aren't completely in the dark. There are two primary theories about what caused this event, which NASA is presenting this week at the 225th meeting of the American Astronomical Society, slated in Seattle.

"If an asteroid was torn apart, it would go around the black hole for a couple of hours -- like water circling an open drain -- before falling in," said researcher Fred Baganoff of the Massachusetts Institute of Technology in a statement. "That's just how long we saw the brightest X-ray flare last, so that is an intriguing clue for us to consider."

WATCH: All About Black Holes

The second theory asserts that the lines of magnetic energy contained in the gas flowing into Sgr A* got tangled and released the X-rays (kind of like a solar flare on our Sun). Ultimately, this theory holds weight precisely because, as NASA notes, the pattern observed is similar to those found in such types of flares observed from the Sun.

However, in the end, the space agency really isn't quite sure what caused the outburst.

"The bottom line is the jury is still out on what's causing these giant flares from Sgr A*," said researcher Gabriele Ponti of the Max Planck Institute for Astrophysics in Garching, Germany. "Such rare and extreme events give us a unique chance to use a mere trickle of infalling matter to understand the physics of one of the most bizarre objects in our galaxy."