Which Moons Have Atmospheres? 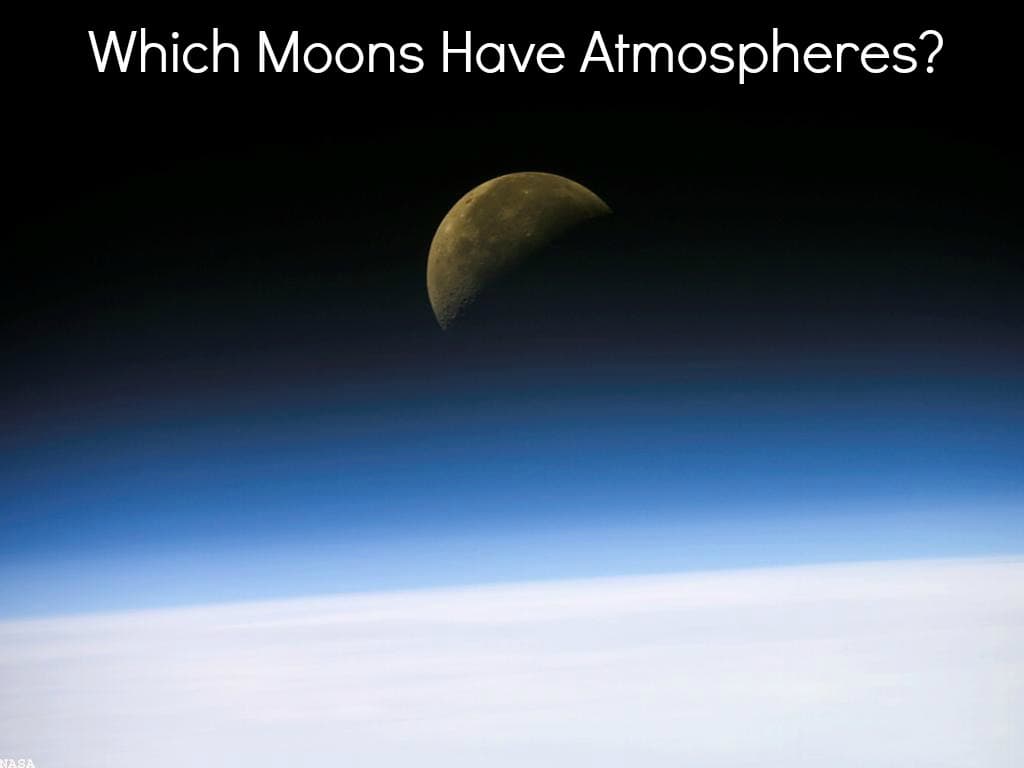 As I trust you know, all of the planets in the solar system have atmospheres – even Mercury, which is the smallest and one of the hottest  planets. Moreover, the planet is constantly bombarded by solar winds, yet it is still able to retain a measurable (albeit, thin) atmosphere. But what about the moons?

All in all, there are at least 171 moons in our celestial neighborhood. Of these moons, ten have known atmospheres. Of course, ‘atmosphere’ becomes a difficult term to define as some are exceedingly thin, while others and insanely thick.  Ultimately, the term is applied to any measurable increase in the presence of atomic and molecular particles around a body in comparison to the interplanetary medium (essentially, a measurable difference between space and the area surrounding a celestial object).

What Atmospheres Are Made Of:

The Moon (Earth), Ganymede, Europa, and Callisto (Jupiter), Rhea, Dione, and Enceladus (Saturn), and Titania (Uranus) all have extremely thin atmospheres. Most of these are comprised of some mixture of oxygen, methane, nitrogen, carbon monoxide, or carbon monoxide – among others.

In most cases, these tenuous atmospheres are created when the Sun’s rays break up molecules; they are also created through volcanic activity. Even then, when you’re a moon, holding on to an atmosphere can be extremely difficult. Between interactions with the parent planet, being bombarded by solar radiation, and a weak gravitational pull, these atmospheres are constantly being stripped away.

(To give you an idea of how thin some of these atmospheres are, the Moon’s atmosphere is estimated to have about 80,000 atoms per cubic centimeter. For the record, at sea level, a cubic centimeter of air on Earth contains about 2*10E19 molecules and atoms – that’s a 2 followed by 19 zeros.)

Both Triton (Neptune) and Io (Jupiter) have more substantial atmospheres, even though both atmospheres are about 100,000 times thinner than Earth’s (which is equal to being more than 100 kilometers above sea level). Both of these moons have atmospheres thick enough to experience weather, seasons, and even clouds. Triton’s atmosphere is primarily composed of nitrogen while Io’s is primarily comprised of sulfur dioxide.

The Most Earth-like Atmosphere:

Lastly, I would be doing you a disservice not to mention Titan (Saturn), the second largest moon – both by radius and mass – in the solar system. Titan is heralded as being the only natural satellite that has a fully developed atmosphere. In fact, Titan’s atmosphere is about 50% denser that Earth’s. Its atmosphere is primarily comprised of nitrogen and methane – so I wouldn’t suggest breathing it. Titan also has weather, cloud formations, seasons, and it could possibly have lightning.

What is the moral of this story? Even some of the moons in our solar system are dynamic and interesting worlds and not just boring rocks obscuring our view of a much cooler planet.