"No tunnel for cars would ever fix this." 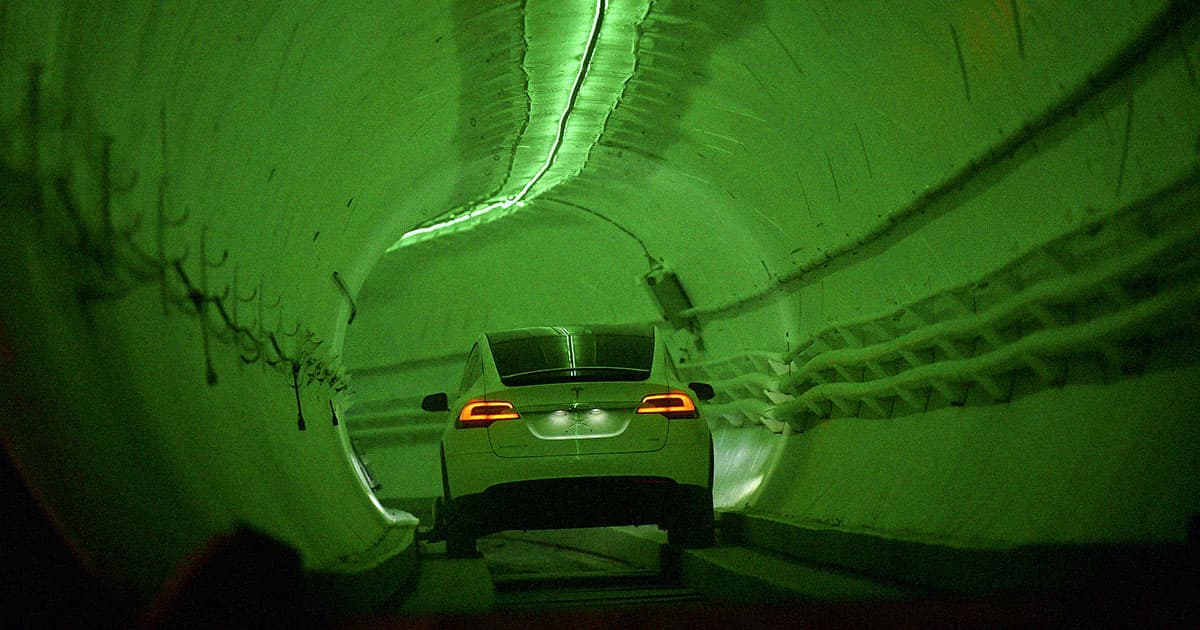 Thanksgiving is upon us — and that means endless stretches of soul-crushing traffic jams, if you happen to live in a busy metropolitan area.

But Tesla fans have a solution in mind: endure the same soul-crushing traffic jams, except underground.

"This reality is insane and here we are in 2021 and this hasn’t been solved," the Twitter account of the Tesla Silicon Valley Club wrote, accompanied by a video from an ABC News helicopter circling over a Los Angeles traffic jam. "Thankful for the efforts of The Boring Company [and] Elon Musk to remove hours of lives missed from sitting in traffic."

"It's either traffic forever or tunnels," he wrote in a response. "Try our first operational tunnel in Vegas at the convention center!" he added, referring to his Boring Company's tunnel transporting visitors from one side of the Las Vegas Convention Center to the other.

Twitter users immediately fired back, stating the obvious: the post was dumb, because it's unclear how expensive underground tunnels are going to solve the problem. Public infrastructure changes, whether above or under the ground, and meaningful investments in public transportation are required to reduce the number of cars on the road — neither of which are really addressed by Musk's vision.

The reality is that the Boring Company has been a pretty big letdown. Its Las Vegas Tunnel's original vision of high-capacity pods transferring crowds of people underground at blistering speeds was watered down significantly to the point where individual Tesla sedans are having to line up to take small groups of visitors to their destination.

"More space for cars doesn't fix this," one user wrote. "Electric cars don't fix this. You need to give people an alternative other than driving."

"No tunnel for cars would ever fix this," city planner Brent Toderian replied. "Neither will 'better cars.'"

"The only things that could are pricing mechanisms that actually charge the full costs of driving, combined with attractive alternatives in how we get around," he added. "Neither of which Musk is selling."

Many others were quick to point out that the obvious solution was invented over a century ago with the advent of the subway. Even conventional aboveground trains are much better equipped to reduce congestion on roads.

The debate speaks to one of the stickiest conundrums the US is facing today: the appetite for investing in a sufficiently spread out rail system isn't huge in the US, meaning that the country's obsession with cars is far from over.

The Boring Company's original vision was a high capacity network of underground pods, sold in the form a flashy 2018 render — but we have yet to hear any concrete plans to make those a reality.

In Musk's defense, even just connecting the Las Vegas Convention Center with major hotels and the airport underground — plans for which the Boring Company just got approval for, according to Musk — could have an effect on reducing the city's road congestion.

But paradoxically, Musk isn't in the business of encouraging people to leave their vehicles behind. He's actively selling them on the dream of having their own electric car — which will inevitably get stuck in traffic when holiday congestion rolls around.

The bottom line: without sufficient incentives for governments to invest in public transportation, Americans are doomed to get stuck in apocalyptic traffic jams year after year, whether they're sitting in Teslas or otherwise.

Read This Next
Where's Musko
7 Theories About Why Elon Musk Has Disappeared
tesla recall
Tesla Accused of Shutting Off Autopilot Moments Before Impact
New Low Score
Tesla Reportedly Giving Full Self-Driving Beta to Basically Anybody Now
Stonk Broke
Twitter Bots Love Tesla. Elon Musk Is Pledging to Destroy Them
Self-Driving Recall
Tesla Says It's Updating Self-Driving Cars to No Longer Break the Law
More on Advanced Transport
Robotaxi to Nowhere
Yesterday on the byte
Group of Robotaxis All Shut Down at Same Moment, Stopping Traffic for Hours
Here for the ride
Wednesday on the byte
GM's Robotaxis Are Now Collecting Fares with No Safety Driver
Sign Me Up
Wednesday on the byte
Airline Announces Plans to Add Spacious Bunk Beds to Economy Class
READ MORE STORIES ABOUT / Advanced Transport
Keep up.
Subscribe to our daily newsletter to keep in touch with the subjects shaping our future.
+Social+Newsletter
TopicsAbout UsContact Us
Copyright ©, Camden Media Inc All Rights Reserved. See our User Agreement, Privacy Policy and Data Use Policy. The material on this site may not be reproduced, distributed, transmitted, cached or otherwise used, except with prior written permission of Futurism. Fonts by Typekit and Monotype.