Two Supermassive Black Holes Are on a Devastating Crash Course

"It's a major embarrassment for astronomy that we don't know if supermassive black holes merge." 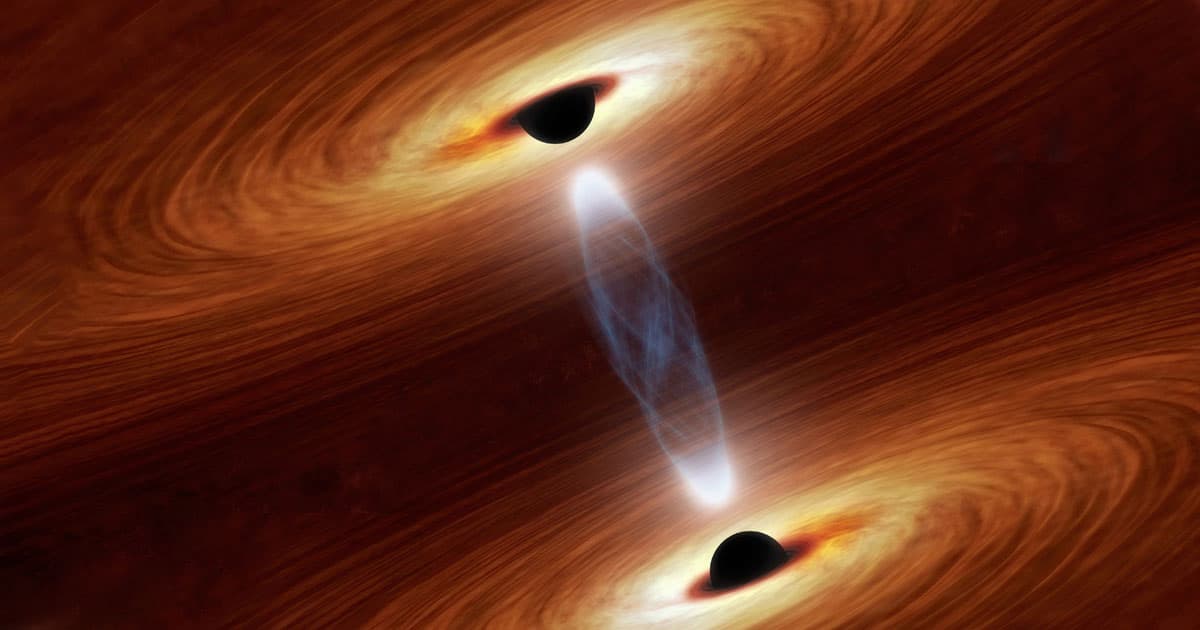 Two supermassive black holes, each 800 million times more massive than our sun, are on a cosmic collision course with each other.

Thankfully, the two black holes are both about 2.5 billion light-years away from us here on Earth, according to research published in the journal The Astrophysical Journal Letters on Wednesday, so it will take 2.5 billion years for astronomers to detect the cosmic waves given off by the collision. But in the meantime, their very existence could help astronomers better understand black holes throughout the universe.

When the black holes reach the final days of their fated approach, they'll give off gravitational waves a million times stronger than those that were first discovered at LIGO, Flatiron Institute for Computational Astrophysics scientist Chiara Mingarelli explained in a Princeton University press release.

Based on the location of other known supermassive black holes, the scientists expect to pick up the waves given off by other collisions within the next five years, per the press release. If they don't, it'll lend evidence to the so-called "final parsec problem," which suggests that supermassive black holes never actually collide. Instead, it holds, they just enter an endless spiral as soon as they reach a one-parsec, or about 3.2 light-year distance from each other.

"It's a major embarrassment for astronomy that we don’t know if supermassive black holes merge," Princeton astrophysicist Jenny Greene said in the press release. "For everyone in black hole physics, observationally this is a long-standing puzzle that we need to solve."

Models predict that the final parsec problem is insurmountable unless three or more supermassive black holes all merge together. If that's true, then the astronomers won't detect any of those thunderous gravitational waves.

But if the astronomers do pick up on new waves in the next few years, it'll mean supermassive black holes actually can collide with one another and merge into even bigger stellar monstrosities — a discovery that would doom the two faraway black holes to their distant collision.

Editor's note 7/11: An earlier version of this story mistakenly used light-years as a measure of time. It has been updated.

Read This Next
Black Hole Snapshot
Scientists Release Image of Black Hole at Center of Our Galaxy
Space Lumps
Scientists Say We May Be Extremely Wrong About the Universe
Into Darkness
Inside NASA's Bold Proposal to Probe the Mysteries of Dark Matter
Sucking Atmospheres
Scientists Spot Ravenous "Vampire" Star Devouring Its Neighbor
Good Samaritan
Physics Dept Gets Random Box Full of $180K in Untraceable $50s and $100s
More on Hard Science
Moved to Tears
Thursday on the byte
Scientists Say New James Webb Images Are So Powerful That It Was Emotional Just Looking at Them
Good God
Tuesday on the byte
Huge Cloud of Toxic Yellow Gas Kills 13
zombie star
Tuesday on futurism
Scientists Puzzled by Star That Exploded in Supernova But Somehow Survived
READ MORE STORIES ABOUT / Hard Science
Keep up.
Subscribe to our daily newsletter to keep in touch with the subjects shaping our future.
+Social+Newsletter
TopicsAbout UsContact Us
Copyright ©, Camden Media Inc All Rights Reserved. See our User Agreement, Privacy Policy and Data Use Policy. The material on this site may not be reproduced, distributed, transmitted, cached or otherwise used, except with prior written permission of Futurism. Fonts by Typekit and Monotype.