"We were gobsmacked by what we saw in this system — it was completely unexpected." 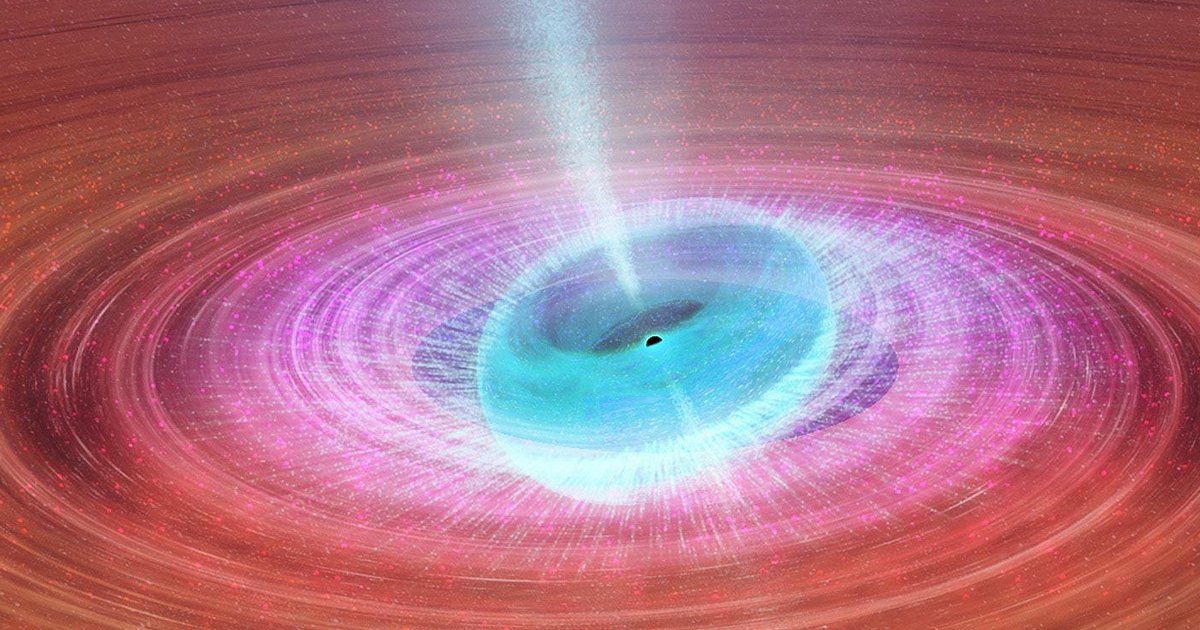 Black holes are already one of the most peculiar phenomena in the universe, but V404 Cygni takes strangeness to the next level.

Instead of spewing jets of plasma from its poles, like most black holes, astronomers caught this black hole almost 8,000 light-years from Earth shooting jets in rapidly changing directions — all while its gravitational pull dragged the fabric of spacetime itself.

"We were gobsmacked by what we saw in this system — it was completely unexpected," researcher Greg Sivakoff said in a press release. "Finding this astronomical first has deepened our understanding of how black holes and galaxy formation can work. It tells us a little more about that big question: 'How did we get here?'”

On Monday, Sivakoff and his fellow researchers from the International Centre for Radio Astronomy Research (ICRAR) published a study detailing their analysis of V404 Cygni's odd behavior, which the Very Long Baseline Array interferometer captured over the course of two weeks in 2015.

"Like many black holes, it’s feeding on a nearby star, pulling gas away from the star and forming a disk of material that encircles the black hole and spirals towards it under gravity," researcher James Miller-Jones said in a news release.

"What’s different in V404 Cygni is that we think the disk of material and the black hole are misaligned," he continued. "This appears to be causing the inner part of the disk to wobble like a spinning top and fire jets out in different directions as it changes orientation."

Because V404 Cygni didn't behave like other black holes astronomers had observed, the team from ICRAR couldn't use tried and true methods to examine it.

"Typically, radio telescopes produce a single image from several hours of observation," researcher Alex Tetarenko said in the news release. "But these jets were changing so fast that in a four-hour image we just saw a blur. It was like trying to take a picture of a waterfall with a one-second shutter speed."

But by combining 103 images of the black hole, each about 70 seconds long, into a single movie, the astronomers found they could observe the jets' rapid changes — and now, they'll know what do if they detect another black hole behaving as strangely as V404 Cygni in the future.

More on black holes: The First Black Hole Photo Is Even More Amazing When You Zoom Out

Read This Next
Star War
Scientists Are Trying to Figure Out How to Kill Stars with Black Holes
EHT Tu, Black Hole
Astronomers Release Stunning New Image of Black Hole
Hole Shebang
Physicists Outline Plan to Harvest Energy From Black Holes
Congrats!
Nobel Prize Winner on Falling Into a Black Hole: "I Would Not Want To"
Not Quite 24 Frames Per Second
Astrophysicists Release Landmark "Movie" of Wobbling Black Hole
More on Hard Science
Warped Tour
Yesterday on futurism
Professor Believes Door to Warp Drive May Lie With Ethylene Glycol
Sky Bursts
Yesterday on the byte
Astronomers Intrigued by 25 Mysterious Repeating Radio Signals From Deep Space
Tractor Beam
Jan 26 on the byte
Scientists Build Working Tractor Beam, Although It's Comically Tiny
READ MORE STORIES ABOUT / Hard Science
Keep up.
Subscribe to our daily newsletter to keep in touch with the subjects shaping our future.
+Social+Newsletter
TopicsAbout UsContact Us
Copyright ©, Camden Media Inc All Rights Reserved. See our User Agreement, Privacy Policy and Data Use Policy. The material on this site may not be reproduced, distributed, transmitted, cached or otherwise used, except with prior written permission of Futurism. Articles may contain affiliate links which enable us to share in the revenue of any purchases made.
Fonts by Typekit and Monotype.