Nobel Prize Winner on Falling Into a Black Hole: "I Would Not Want To" 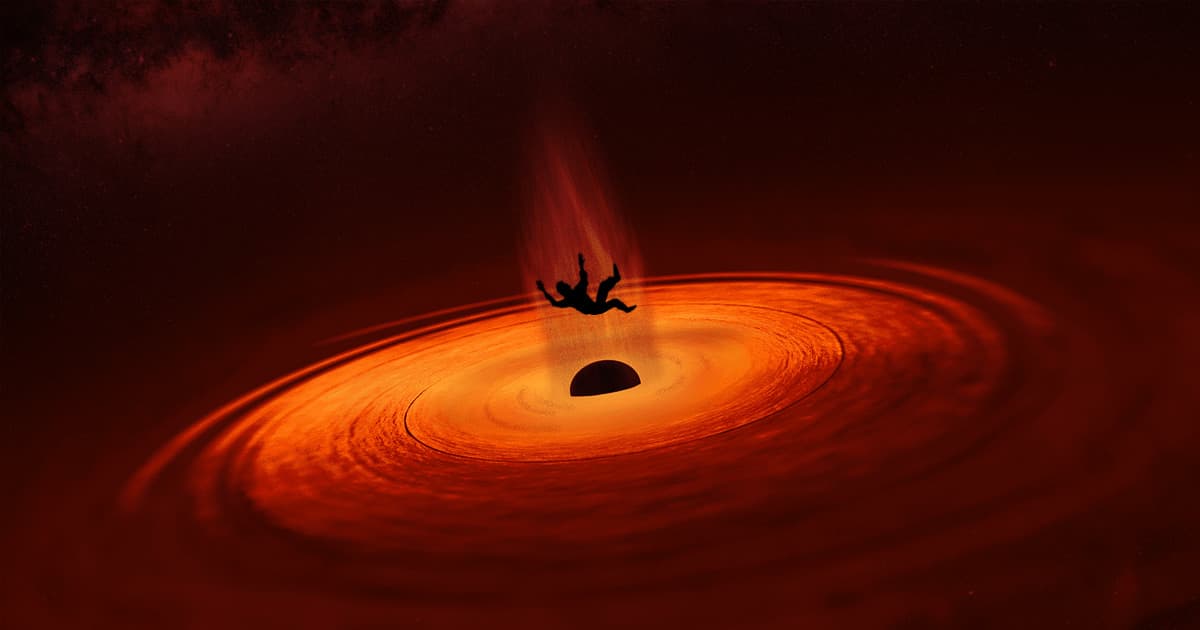 But Ghez, who's only the fourth woman ever to receive the coveted prize, isn't taking the award too seriously. When asked what would happen if one were to fall into a black hole, she had a grim answer.

"So if you were to think about falling into a black hole feet first, the first thing that would happen is that the pull of gravity is so much stronger in your feet than your head that you would actually be torn apart," she told Agence France-Presse.

"We wouldn't feel anything because we wouldn't exist, we wouldn't survive it, we would be broken down into our fundamental pieces," she added. "I would not want to do this."

Ghez shares the prize this year with Reinhard Genzel, astrophysicist and co-director of the Max Planck Institute for Extraterrestrial Physics.

Ghez and her team recently celebrated 25 years of studying the supermassive black hole at the center of the Milky Way, called Sagittarius A*, using the Keck Observatory atop Mauna Kea in Hawaii.

Thanks to the telescope's detailed resolution, her work enabled us to follow the orbits of stars circling the black hole despite a massive shroud of interstellar gas and dust blocking our view. Her research gave us the most robust evidence that what's lurking at the center of our galaxy is a supermassive black hole.

"What Andrea Ghez and Reinhard Genzel did was one of the coolest things ever — revealing stars in the center of our galaxy orbiting a black hole too small to see with a telescope," Peter Fisher, professor and head of MIT’s Department of Physics, said in a statement.

Every day studying black holes, Ghez says, is a mind-bender.

"It's very hard to conceptualize a black hole," Ghez told AFP. "The laws of physics are so different near a black hole than here on Earth, that the things that we're looking for, we don't have an intuition for."

More on Sagittarius A*: Astronomers Detect “Bullets” of Gas Shooting Out of Our Galactic Center

Read This Next
Black Hole Snapshot
Scientists Release Image of Black Hole at Center of Our Galaxy
Star War
Scientists Are Trying to Figure Out How to Kill Stars with Black Holes
EHT Tu, Black Hole
Astronomers Release Stunning New Image of Black Hole
Kill It With Fire
Astronomers Find Five Dozen Baby Black Holes in Distant Psychotic Chaos Galaxy
Pac Man Black Hole
A Black Hole Bites a Chunk Out of This Star Every 114 Days
More on Hard Science
Moved to Tears
Thursday on the byte
Scientists Say New James Webb Images Are So Powerful That It Was Emotional Just Looking at Them
Good God
Tuesday on the byte
Huge Cloud of Toxic Yellow Gas Kills 13
zombie star
Tuesday on futurism
Scientists Puzzled by Star That Exploded in Supernova But Somehow Survived
READ MORE STORIES ABOUT / Hard Science
Keep up.
Subscribe to our daily newsletter to keep in touch with the subjects shaping our future.
+Social+Newsletter
TopicsAbout UsContact Us
Copyright ©, Camden Media Inc All Rights Reserved. See our User Agreement, Privacy Policy and Data Use Policy. The material on this site may not be reproduced, distributed, transmitted, cached or otherwise used, except with prior written permission of Futurism. Fonts by Typekit and Monotype.