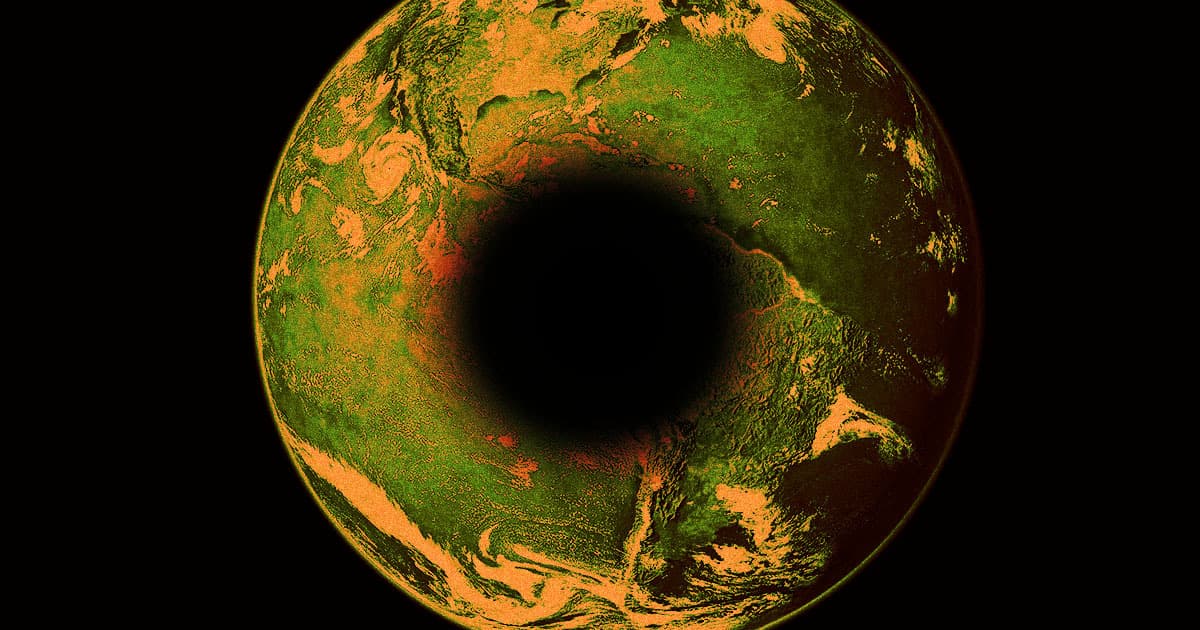 An outrageously strange paper claims, among other things, that there's a black hole at the center of the Earth.

"Recently, some scientists from NASA have claimed that there may be a black hole like structure at the centre of the earth," the paper begins. "We show that the existence of life on the earth may be a reason that this black hole like object is a black brane that has been formed from biological materials like DNA."

"Size of this DNA black brane is 109 times longer than the size of the earth’s core and compacted interior it," it continues. "By compacting this long object, a curved space-time emerges, and some properties of black holes emerge."

When researchers dug the paper up this week — it was published about a year ago, but attracted little attention until now — they expressed consternation about both the contents of the paper and how it ended up in what appears to be a vaguely credible scientific journal. The bylines on the paper do appear to correspond to actual researchers at a variety of European universities. But its claims, about a black hole formed by something "like DNA," are hilariously tabloid-esque.

The most likely explanation, according to Cambridge University mathematician Sarah Rasmussen, is that the authors purposely submitted a ridiculous paper in order to expose "predatory journals" that purport to be normal, peer-reviewed publications, but in reality apply little scrutiny to material that they publish, often in order to collect publication fees.

So, fortunately, it appears that there isn't actually a black hole in the center of the Earth — although there may be some form of black hole where the Open Access Macedonian Journal of Medical Sciences's editorial standards are supposed to be.

Read This Next
Falling In
Objects We Thought Were Black Holes May Actually Be Wormholes, Scientists Say
Black Hole Snapshot
Scientists Release Image of Black Hole at Center of Our Galaxy
Sucking Atmospheres
Scientists Spot Ravenous "Vampire" Star Devouring Its Neighbor
Yuge
Scientists Discover Enormous Black Hole Right Near Our Galaxy
EHT Tu, Black Hole
Astronomers Release Stunning New Image of Black Hole
More on Hard Science
Tractor Beam
Thursday on the byte
Scientists Build Working Tractor Beam, Although It's Comically Tiny
Having a Blast
Jan 18 on the byte
New Study Shows Where You Should Hide to Survive a Nuclear Attack
Offworld Amino
Jan 15 on the byte
Scientists Find Building Blocks of Life in Meteor That Smashed Into Family's Driveway
READ MORE STORIES ABOUT / Hard Science
Keep up.
Subscribe to our daily newsletter to keep in touch with the subjects shaping our future.
+Social+Newsletter
TopicsAbout UsContact Us
Copyright ©, Camden Media Inc All Rights Reserved. See our User Agreement, Privacy Policy and Data Use Policy. The material on this site may not be reproduced, distributed, transmitted, cached or otherwise used, except with prior written permission of Futurism. Articles may contain affiliate links which enable us to share in the revenue of any purchases made.
Fonts by Typekit and Monotype.