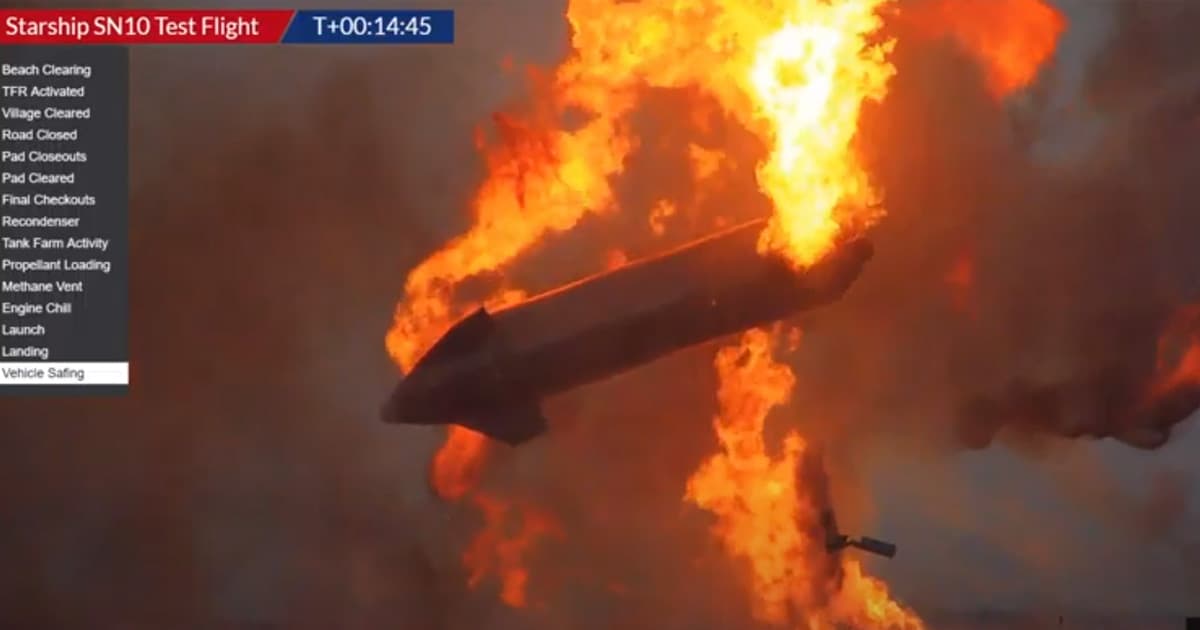 After a promising flight, SpaceX's SN10 Starship prototype landed gently on Wednesday evening — where it remained on the ground for several minutes before violently exploding.

Four and a half minutes after launch, after piercing the clouds at an altitude of roughly ten kilometers, the 165-foot stainless steel tower smoothly flipped itself onto its front to perform a "belly flop maneuver" intended to slow its descent.

It then fired its thrusters and landed gently. However, it appeared to have landed at an angle, and flames could be seen at its base. Minutes later, it blew up — like its two predecessors.

The landing was a step in the right direction. The prototype used its three Raptor engines to flip itself back upright before safely making contact with the ground vertically on the launch pad below.

"Third time's the charm, as the saying goes," the SpaceX official narrating the official stream said, before the explosion.

After the rocket landed, crew on the ground attempted to put out a fire at the base of the rocket using fire hoses. It also appeared to be leaning a little.

A first attempt had to be canceled Wednesday afternoon due to a "slightly conservative high thrust limit," according to a tweet by SpaceX CEO Elon Musk. "Increasing thrust limit & recycling propellant for another flight attempt today."

Today's launch marks the third full-scale launch of SpaceX's Starship prototypes. Both of the rocket's predecessors SN8 and SN9 flew to an altitude of roughly ten kilometers as planned in December and February, but neither quite stuck the landing, ending their respective journeys in two massive fireballs.

SN10 was the first prototype to use all three of its Raptor engines to slow its landing. SN8 and SN9 only ignited two of their three Raptor engines to assist in slowing its descent prior to landing, a big part of why they met their demise upon landing.

SpaceX is accelerating its development pace. It took the company only five weeks between lining up the rocket at its facilities and the actual launch. SN8 and SN9 took between six and ten weeks, according to Teslarati.

If all goes well, the company wants to attempt its first orbital test launch some time this year, with the goal of visiting the Moon just two years later.

If SpaceX has its druthers, SpaceX will launch a crewed Starship mission all the way to Mars just three years from now.

How today's explosion fits into that plan remains to be seen — but the gentle landing was a step in the right direction.