Starship could attempt to make its first voyage to the Red Planet as soon as 2022. 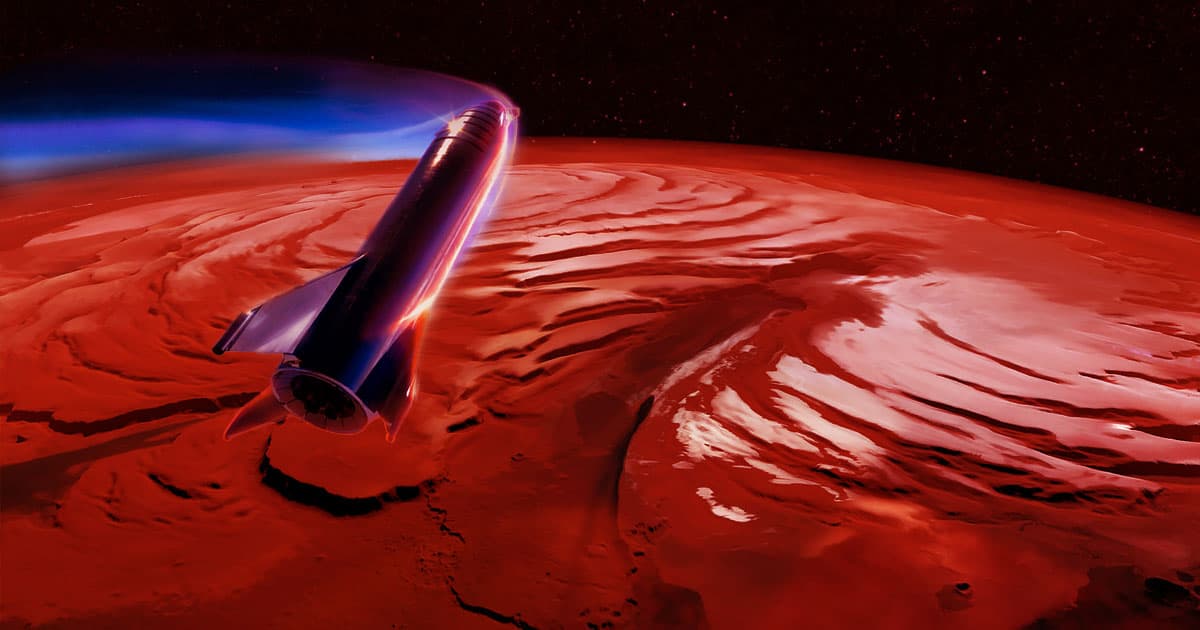 We may not yet know how to get to Mars exactly, but — as to be expected from a company led by Elon Musk — SpaceX is already several steps ahead.

The private space company has leveraged images from NASA's Mars Reconnaissance Orbiter, an imaging satellite that's currently orbiting Mars, to determine a landing site for its in-development Starship spacecraft — despite the fact that the 180-foot spacecraft's maiden voyage is still years out.

Images labelled "Candidate Landing Site for SpaceX #Starship in Arcadia Region" were found in latest data release from @HiRISE. It means @SpaceX is already quietly evaluating best place where to land first Starships on #Mars. We made a map of those sites: https://t.co/fejyWhEtzP pic.twitter.com/wV3ACDbJZx

Space historian Robert Zimmerman came across images, with the labels "Candidate Landing Site for SpaceX Starship," in data from the NASA orbiter.

The images of the Martian surface were taken by a high-res camera system called HiRISE onboard the orbiter, and uploaded to the University of Arizona's website, the institution responsible for operating the camera.

SpaceX's search for a landing site dates back to 2017, according to Teslarati. Over the past two years, the company has narrowed its search to a massive plains region called Arcadia Planitia. Five of the six potential landing sites shown in the new images are inside this zone.

Previous research suggests that the plains could be covered in abundant amounts of shallow ice at low altitudes. Not only could it provide access to water for subsistence and rocket fuel for a return to Earth, but the plains would be comparatively easy to land in thanks to the lack of geographical obstacles such as large rocks or mountains.

The plains' latitude also means that the Arcadia Planitia is warmer, with a milder climate than other regions of Mars. Low altitude also means slightly elevated air pressure, which could act as a protective barrier against harsh radiation.

So when will Starship attempt its epic voyage? According to SpaceX CEO Elon Musk, Starship will attempt its first orbital mission as early as 2020 — and head to Mars as soon as 2022.

But the company has a gargantuan task ahead of it. A much smaller, scaled-down version of its mammoth Starship spacecraft made its first untethered flight only in July. And according to Musk, a test vehicle twice as big is already in the plans.

More on Starship: Elon Musk: “Next Gen” Craft Could Be Twice the Size of Starship

Read This Next
Martian Oases
Scientist Proposes Growing a Forest Inside a Bubble on Mars
Big Impact
Meteorite Hit Mars So Hard NASA Thought It Was a Quake
Makeover Scene
Space Tourist Says He's Thinking About Flying SpaceX Craft Up to Fix Hubble
Grain of Salt
There's a Huge Problem With Elon Musk's Promise to Bring Starlink to Iran
Palliative Care
NASA's Mars Lander Refuses to Die Even Though It's Supposed To
More on Off World
Cubesat Death
Yesterday on the byte
Another Satellite Released by NASA's Artemis I Just Croaked
Kilonova Blast
Yesterday on futurism
Staggering Galactic Explosion Blamed on Black Hole Collision
Little Boxes
Yesterday on futurism
One Silly Little Detail Is Reportedly Delaying Artemis II by Years
READ MORE STORIES ABOUT / Off World
Keep up.
Subscribe to our daily newsletter to keep in touch with the subjects shaping our future.
+Social+Newsletter
TopicsAbout UsContact Us
Copyright ©, Camden Media Inc All Rights Reserved. See our User Agreement, Privacy Policy and Data Use Policy. The material on this site may not be reproduced, distributed, transmitted, cached or otherwise used, except with prior written permission of Futurism. Articles may contain affiliate links which enable us to share in the revenue of any purchases made.
Fonts by Typekit and Monotype.