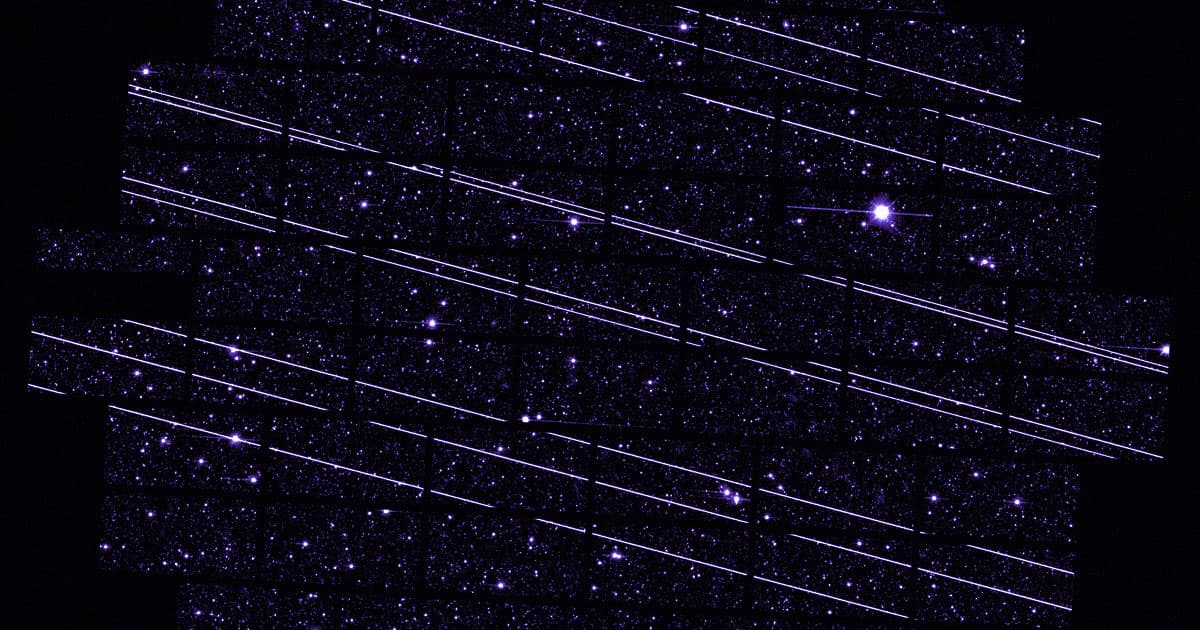 It's no secret that growing satellite constellations have been wreaking havoc on astronomical observations over the last couple of years.

Now, astronomers are warning that SpaceX's Starlink internet satellites could interfere with their ability to spot asteroids careening toward Earth — a troubling development, as SpaceX is planning to launch thousands if not tens of thousands more satellites in the coming years.

In a new study published in The Astrophysical Journal Letters, astronomers spotted "5,301 satellite streaks that can be attributed to Starlink satellites" in observations made by the Zwicky Transient Facility (ZTF), an extremely wide-field camera that scans the entire northern sky every two days.

The large majority of the streaks appeared in observations taken at dawn or dust, a crucial period for "spotting potentially dangerous asteroids coming from the direction of the Sun," according to Space.com.

But the risks are fortunately slim — at least for now.

"There is a small chance that we would miss an asteroid or another event hidden behind a satellite streak, but compared to the impact of weather, such as a cloudy sky, these are rather small effects for ZTF," Tom Prince, co-author of the paper and a physics professor at Caltech, said in a statement.

To date, SpaceX has launched just shy of 1,500 satellites, with 272 on their way to their operational orbits.

The space company has taken the astronomy community's concerns seriously since launching their first batch back in February 2018. In early 2020, SpaceX started testing Sun visors to stop sunlight from being reflected back onto the ground.

According to the study's findings, the visors did have an effect, reducing the satellites' brightness to roughly a fifth as compared to the original design.

While it's certainly a step in the right direction, Starlink satellites are still far too bright — and could mess with other crucial observations.

Read This Next
Future Fiction
Scientists Propose Building City Inside Giant Bag Around Entire Asteroid
Shot Well
Head of NASA Relieved to Hear Elon Musk Isn't REALLY Running SpaceX
Makeover Scene
Space Tourist Says He's Thinking About Flying SpaceX Craft Up to Fix Hubble
Grain of Salt
There's a Huge Problem With Elon Musk's Promise to Bring Starlink to Iran
Sluggo Mode
SpaceX Has a Major Problem With Its Starlink Internet Connections
More on Off World
Lonely Planet
Yesterday on futurism
Scientists Find Nearby Planet the Same Size of Earth, Plan to Search It for Life
Take Cover
Feb 4 on the byte
Space Startup Blows Up Another Giant Inflatable Space Station Module
Rock Blast
Feb 4 on the byte
Scientists Say There's an Upside to Those Rocks That Keep Bludgeoning the James Webb
READ MORE STORIES ABOUT / Off World
Keep up.
Subscribe to our daily newsletter to keep in touch with the subjects shaping our future.
+Social+Newsletter
TopicsAbout UsContact Us
Copyright ©, Camden Media Inc All Rights Reserved. See our User Agreement, Privacy Policy and Data Use Policy. The material on this site may not be reproduced, distributed, transmitted, cached or otherwise used, except with prior written permission of Futurism. Articles may contain affiliate links which enable us to share in the revenue of any purchases made.
Fonts by Typekit and Monotype.