Watch SpaceX Test-Fire the Starship Engine for the First Time

Turn up your speakers. 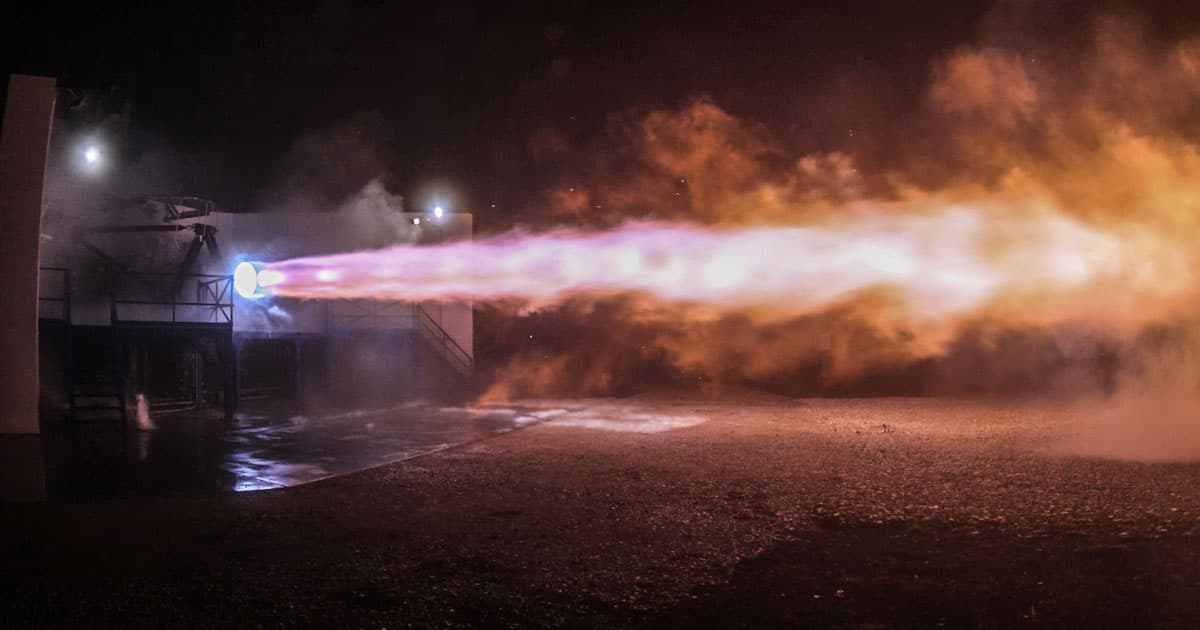 SpaceX's next generation Raptor engine roared into action at its test site in McGregor, Texas, in a video CEO Elon Musk posted on Twitter Sunday night.

This particular iteration of SpaceX's Raptor engine will be used to launch the space company's gigantic stainless steel Starship into space — and eventually to the Moon and beyond.

The new engine design will be responsible for getting the Starship spacecraft off the launch pad and boost it through the vacuum space. That's a surprising departure: so far, conventional rocket designs have used multiple stages, jettisoning fuel tanks and boosters as they ascend.

It will also use methane as fuel — a choice SpaceX says will improve performance. And given that it's an abundant resource on Mars, it could provide a convenient way back home.

There will also be two versions of the Raptor engine: one specialized for sea level and one for vacuum optimized thrust. A total of seven Raptor engines will blast off in unison to launch the final Starship design.

Last week Musk tweeted some photos of the engine, adding that the company's new goal is to "reach the moon as fast as possible."

The next steps for the new engine will be so-called "hop" tests at relatively low altitudes. If all goes well, Starship could start making its way on a cargo mission to Mars as soon as 2022.

But budget cuts, severe weather, and mounting costs could end up delaying that trip significantly.

READ MORE: SpaceX test fires the massive new engine for its next big rocket [The Verge]

Read This Next
A Sip of Opal
NASA Discovers Precious Gemstones on Mars
Shot Well
Head of NASA Relieved to Hear Elon Musk Isn't REALLY Running SpaceX
Martian Oases
Scientist Proposes Growing a Forest Inside a Bubble on Mars
Big Impact
Meteorite Hit Mars So Hard NASA Thought It Was a Quake
Makeover Scene
Space Tourist Says He's Thinking About Flying SpaceX Craft Up to Fix Hubble
More on Off World
Take Cover
Yesterday on the byte
Space Startup Blows Up Another Giant Inflatable Space Station Module
Rock Blast
Yesterday on the byte
Scientists Say There's an Upside to Those Rocks That Keep Bludgeoning the James Webb
Meathead Theory
Yesterday on the byte
Professor Receives Insane Email Claiming "Biological" Green Comet Is Giving Off "Meat Smoke"
READ MORE STORIES ABOUT / Off World
Keep up.
Subscribe to our daily newsletter to keep in touch with the subjects shaping our future.
+Social+Newsletter
TopicsAbout UsContact Us
Copyright ©, Camden Media Inc All Rights Reserved. See our User Agreement, Privacy Policy and Data Use Policy. The material on this site may not be reproduced, distributed, transmitted, cached or otherwise used, except with prior written permission of Futurism. Articles may contain affiliate links which enable us to share in the revenue of any purchases made.
Fonts by Typekit and Monotype.