Sorry Dog Lovers, Your Dog is Probably Not as Smart as You Think 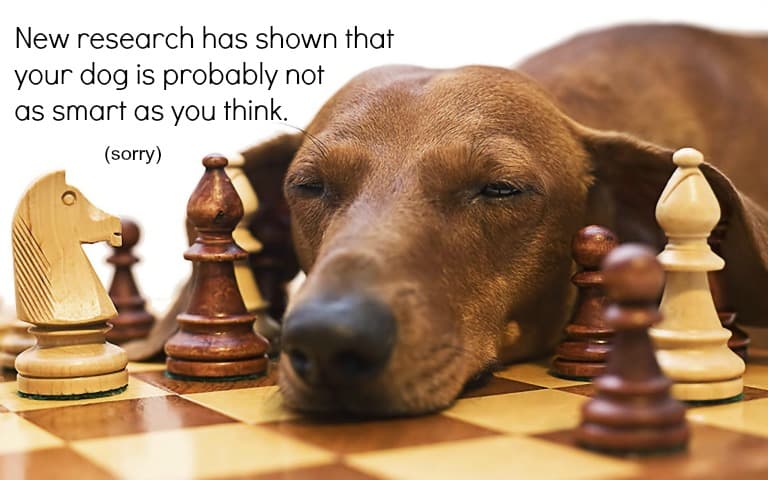 This is a year for pet lovers. A study published in May demonstrated that your cat really ignores you, proving to the world that cat owners aren't completely crazy. Unfortunately, the news isn't that great for dog owners. In a study published in the Journal of Veterinary Behavior, Tiffani Howell and her team found evidence that people severely overestimate the intelligence of our pooch.

The study made a correlation that the closer a human is to their dog, the smarter they think the dog is - which is an understood psychological phenomenon.

In case you were curious, Stanley Coren from Psychology Today compared our perception of our dog's intelligence with actual data on how smart dogs tend to be,

So how do these judgments of dog owners compare to the actual scientific data on the mental abilities of dogs? Well, dog owners feel that their pets can judge human emotions and there is a lot of data which shows that they are right about this (click here or here for examples). Dog owners feel that their dogs can learn to solve problems, often by just observing the behavior of humans or other dogs who know the solution and again they are right about this (click here for an example). However, when it comes to comparing the equivalent mental abilities of dogs to that of humans of various ages, it appears that the dog owners tend to overestimate the cognitive ability of dogs relative to what the scientific data seems to be showing us. The research findings are that dogs' mental abilities are most similar to that of human children between the age of two and three (click here for an example). In the current study the dog owners most commonly placed the intelligence of dogs in the 3 to 5-year-old human range and nearly 25 percent of them rated it a lot higher than that.

So, the next time you're bragging about how smart your dog is to your friends, this study can sit in the back of your mind and nag you.