Smiley Face Moon: The Conjunction of Venus, Jupiter, and Luna 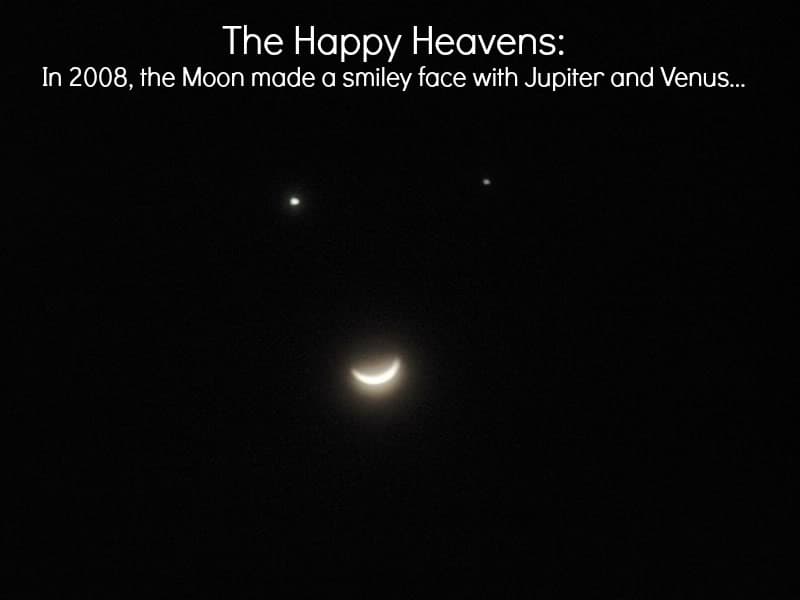 In 2008, the world witnessed a rare event: The conjunction of the Moon, Venus, and Jupiter. A conjunction occurs when planets align in the sky; however, this event was notable and rare, not because the planets aligned, but because of the way that they aligned. Looking at these images, it is extremely easy to see a smiley face. This is known as "pareidolia." In essence, "pareidolia" occurs when one sees meaningful images in random data. It is a rather common phenomenon, especially in relation to astronomy. Think about the man in the Moon or the face on Mars; they are neat tricks of the eye, but nothing more. Ultimately, pareidolia does not signify anything, it is just our brains interpreting data in interesting ways.

Carl Sagan once postulated in his book “The Demon-Haunted World – Science as a Candle in the Dark,” that this (seeing human faces in unrelated patterns) was likely engrained in humans at birth through millions of years of evolution, when it became necessary to discern between friends and foes during an earlier period when it could have been life or death for us. Furthermore, he argued that the brain’s ability to use contextual clues to put together human faces from a distance and in poor visibility is an evolutionary advantage for humans, but that is still highly debated.

This smiling sky appeared over Earth in 2008; it's "a rare celestial trifecta of Venus, Jupiter, and the moon." This amazing event was visible from all parts of the world. In fact, it was even visible in cities that are plagued by light pollution, like New York City and Hong Kong (so hopefully, you didn't miss it). But even if you did, there are these handy pictures here to give you an idea of what it looked like. Interestingly, people around the globe saw the face a little differently. Individuals living in Asia witnessed a smiley face, while people in the United States saw a frown. The three brightest objects in the sky were so tightly gathered that one could eclipse them with a thumb. Such conjunctions occur on a regular basis, but often are not as obvious as the planets are farther away.

The following image comes from Kathmandu in Nepal, and shows a view of what the event looked like to most stargazers (or moongazers, as the case may be). As an interesting aside, the word "pareidolia" is derived from the Greek words ‘para,’ (meaning something faulty) and eidōlon (meaning image, form, or shape) and is a form of Apophenia

You can see more amazing images of men in the Moon, faces on Mars, and celestial space beasts by visiting this article (don't worry, none of these monsters are actually real). Also, please note: The below image has been making the rounds recently (which is partly what prompted this post). The image in question is, in fact, fake. You can tell because both Jupiter and Venus looks exactly the same. Also, the conjunction was in 2008, not 2010. Although a conjunction like this did occur in 2012, Jupiter and Venus were much farther apart and much farther from the Moon. I believe the images that shows the three at their closest (and which are reliable and accurate) are those posted here.

So, what did the Moon really look like on May 16th, 2010? As it turns out, it was pretty awesome then as well. Check it out in the video below...