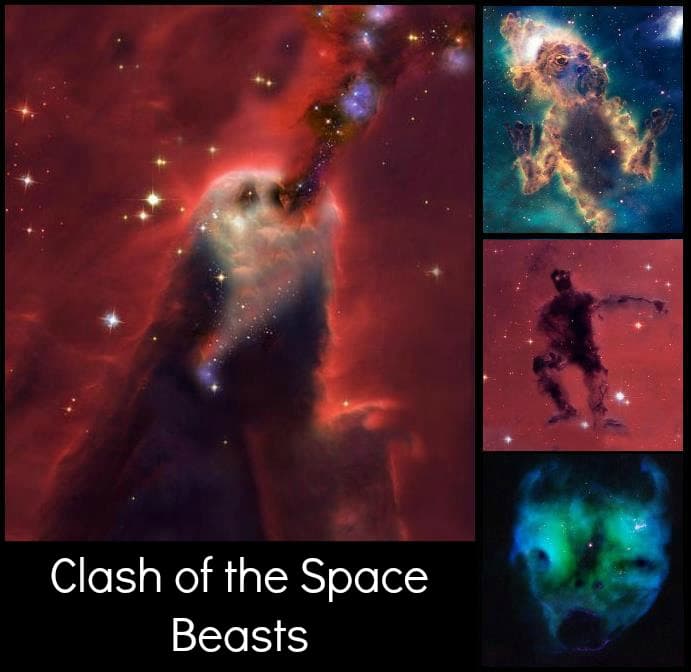 When you are laying outstretched on your back, staring into the sunny blue sky on a cloudy day, are you one of those people that see faces, shapes, animals, or other objects in the clouds? I think most of us have seen such things... it's one of the joys of childhood. However, did you know there is actually a word for this phenomenon? It's called "pareidolia."

The word itself is derived from the Greek words 'para,' (meaning something faulty) and eidōlon (meaning image, form, or shape) and is a form of Apophenia, which means "seeing meaningful patterns or connections in random or meaningless data." Except in this case, the patterns seen are fictitious.

This phenomena is responsible for the so-called "man in the moon," the cydonia face on mars, the (ridiculous, yet hilarious) "cheesus" found in a bag of cheetos, and (famously) the ten year old grilled cheese sandwich that supposedly contained the face of Jesus...which was eventually sold on ebay for a staggering $28,000 in 2004.

Carl Sagan once postulated in his book "The Demon-Haunted World – Science as a Candle in the Dark," that this (seeing human faces in unrelated patterns) was likely engrained in humans at birth through millions of years of evolution, when it became necessary to discern between friends and foes during an earlier period when it could have been life or death for us. Furthermore, he argued that the brain's ability to use contextual clues to put together human faces from a distance and in poor visibility is an evolutionary advantage for humans, but that is still highly debated.

With that said, I personally have a propensity for seeing crazy space monsters in deep space images. Most of the starforming regions are filled with so many colors and so much complexity, the faces sometimes jump straight out to me. Judging from the image attached to this article, I'm not the only one. Chris Keegan, a professional illustrator, took some images captured by the Hubble Space Telescope, and manipulated them just a bit to make the celestial beasts pop out.

The larger image (in the center-ish) is my favorite out of the bunch, the manipulated version of the Cone nebula, a celestial region located some 2,500 light-years from Earth in the constellation of Monoceros. It is a small part of the larger star forming region designated as NGC 2264. The column itself, which is composed primarily of cold gas, is quite large ( it extends a full 2.5 light-years in space, making it about 65 times larger than the diameter of our solar system!).

So next time an apparition of the virgin Mary pays you a visit on your morning slice of toast, just remember, it's just bread. Not a divine sign. We humans have a tendency to find patterns in just about everything!