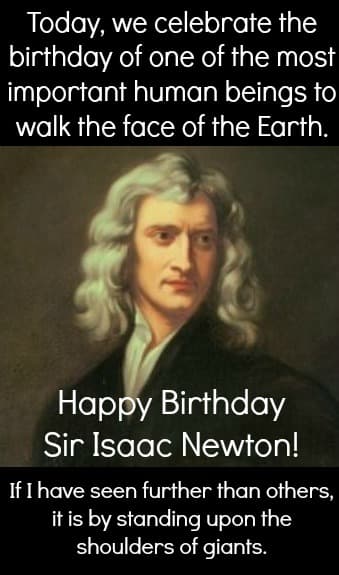 Today, we celebrate the birthday of one of the most important human beings to walk the face of the Earth. On this day, in 1642, Sir Isaac Newton was born. He would be 371.

Newton was a physicist and mathematician from England. His work laid the foundation of classical mechanics (also called Newtonian physics or mechanics in his honor) and is generally credited with jump starting the scientific revolution. Newton was also one of the first people to assume that the natural world is governed by universal laws that can be expressed mathematically. Generally speaking, Newton's list of accomplishments are long and profound - his influence will be felt for the rest of human history.

A (Very) Brief History of Newton

Newton was born prematurely on December 25, 1642 in Lincolnshire to his mother Hannah Ayscough and his late father Isaac Newton (yes, Newton was named after his father). His mother eventually remarried when Newton was three and, after Newton turned 12, he was pulled out of school to return home as his stepfather (who he didn't like) had died. Newton's mother attempted to make a farmer out of him, but those efforts failed and Newton returned to school.

Newton was thought to have Asperger syndrome and was diagnosed with the disorder by his school psychologist. However, that didn't stop Newton from becoming the top student in the school. After graduation, he continued on to Trinity College. While there, Newton studied the works of the great philosophers and mathematicians, he discovered the generalized binomial theorem, and started to developed the mathematical foundation for calculus - shortly after these accomplishments, Newton graduated (now, my entire college career feel like a waste. I mean, when I "invent new math", my professors usually tell me I'm wrong). Shortly after Newton's graduation, Trinity closed because of the Great Plague.

Between the Trinity closure in 1665 and Newton's return to Cambridge in 1667, Newton developed calculus, the law of gravitation, and different theories on optics.

The Discovery of Calculus

Although Newton gets all of the credit for the discovery of calculus in the modern world, he was involved in a controversy with Gottfried Leibniz over who discovered calculus first. Essentially, Newton claimed he started working on calculus in 1666 and published Principia in 1687; Leibniz started working on the new math in 1674 and published his first paper in 1684. Leibniz claimed Newton had stolen his work (now, we have work from Newton that proves he was working on calculus in 1666 as he claimed). It has been decided that Newton and Leibniz arrived at calculus independently from one another. Because of this, sometimes calculus is referred to as Newton-Leibniz calculus since both men are credited with it's discovery (Newton did, however, have "better press" so he is better known for the discovery).

Newton's work in optics at the time was unmatched.

Newton is credited with the discovery of the prism (which is how rainbows, and other cool things, work). At the time, scholars were in a hot debate on the subject of whether or not color was an intrinsic property of light. When Newton discovered that a light ray entering a prism is split into different colors (or, wavelengths), this helped to settle this debate.

This work, and generally Newton's work with refraction, led Newton to work with telescopes. We was able to construct the first practical reflecting telescopes, a design that is known today as a Newtonian Telescope.

Because of his work with light and optics, Newton believed that light was made of particles, instead of waves. Scientists of the time favored a "light as a wave" approach, a practice that continued in spite of Newton's efforts (today, scientists understand that light actually exists as both a particle and a wave, cryptically named the wave-particle duality). To explain some of lights properties, Newton did propose the existence of aether (also called luminiferous aether). Aether was as idea that survived until the 19th century - when the wave-particle duality was realized, scientists no longer required the theory of aether to explain light's properties, so the theory was no longer needed.

Newton is perhaps best know for his work with gravity.

He discovered the three laws of motion that we all know and love. Newton's First Law is the law of inertia and is probably his most widely known law. It basically states that an object at rest remains at rest or an object in motion remains in motion unless if an outside force acts upon it. Newton's Second Law is probably the least known, and basically states that an applied force on an object is equal to the rate of change it its momentum, but, whereas the law itself isn't very well known, the equation is - its expressed mathematically as F=ma and basically means force is equal to the mass of an object times its acceleration. Newton's Third Law competes with the first law in popularity, and famously states that for every action, there is an equal and opposite reaction.

Newton also worked on heliocentricism. At the time, geocentricism was still competing with heliocentricism (though, the sun-centered model was more widely accepted). Newton's determined that the planets did not orbit around the sun (more precisely, the Sun's center), but rather two bodies orbited around the common center of gravity. With this, the heliocentric model of the solar system continued to get more accurate and Newton's work essentially dealt the final blows to geocentricism.

In Newton's late life, he wrote a lot on theology. He was knighted bi the queen of England in 1705 (the second scientist to have been knighted in England). Newton later died in 1727 from mercury poisoning, likely caused by Newton's work in alchemy. Newton never married.
Newton is widely regarded as one of the most important people who ever lived. Many of his ideas still hold true and his equations are still used to this day (when sending a probe to the outskirts of the solar system, NASA doesn't use relativity to work out the math, they use Newtonian physics). Newton has secured his place in history.

Much of the biographical information for this article come from biography.com