"So far we have not seen any oil spill. We consider we are lucky." 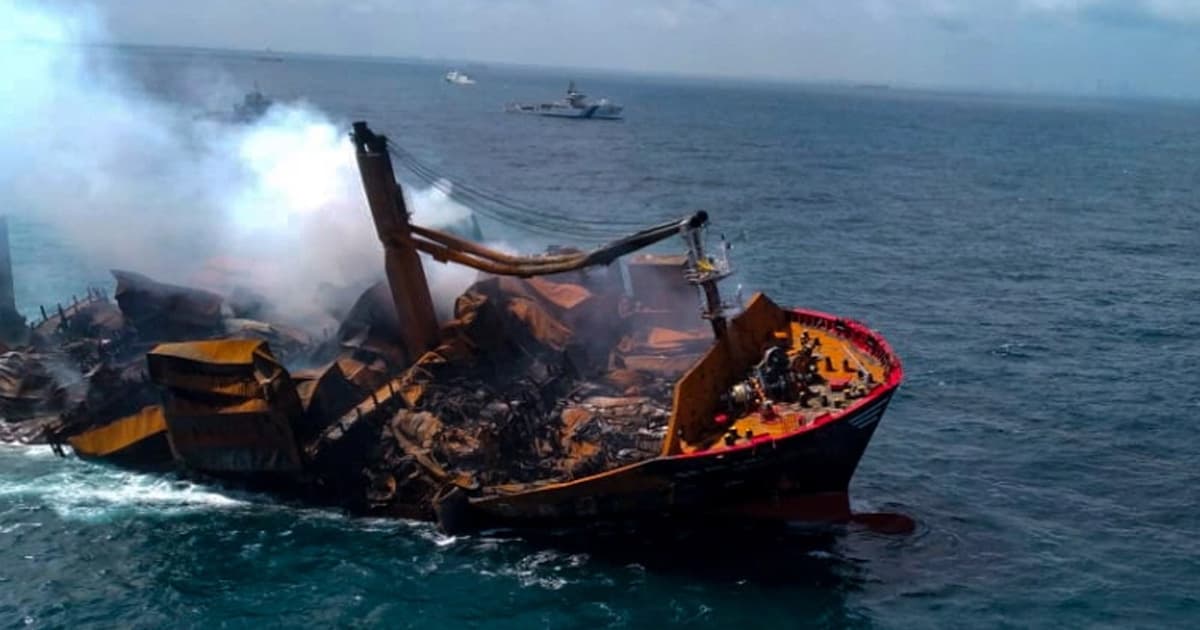 A massive container ship carrying 330 tons of oil and 25 tons of flammable nitric acid off the coast of Sri Lanka was hit by an explosion last week after the Sri Lankan navy failed to put out the flames that had been raging on board for at least four days.

Now the fire is quickly turning into a horrifying environmental disaster. And officials in Sri Lanka are bracing for the disaster to get even worse, as the Associated Press reports.

It's a harsh reminder that container ships are vulnerable and pose considerable environmental risks. We haven't even seen the full extent of the damage caused to the environment by this latest catastrophe.

Earlier this week, the doomed container ship started sinking, threatening to bring down almost 330 tons of oil with it. The bow of the ship became submerged enough to rest on the seabed, stopping short efforts to haul it away from the port in Colombo, Sri Lanka's executive and judicial capital.

Officials are racing to get ahead of the impending disaster. In response, the government has banned any fishing along a 50 mile stretch of coastline.

But the effects of the incident can already be seen. The western coastline of Sri Lanka is being blanketed in billions of plastic pellets that are potentially coated in toxic chemicals.

The pellets "will persist in the marine environment forever as they are not biodegradable," Charitha Pattiaratchi, a professor of oceanography at the University of Western Australia, told the AP.

The oil on board may have burned off in the flames already, but there's no guarantee.

"But we have to look at the worst-case scenario and we are not saying 100 percent there is no oil," Colombo port’s harbor master, Nirmal Silva, said in a statement quoted by the AP. "There is a possibility that there may be some. So far we have not seen any oil spill. We consider we are lucky."

The Sri Lankan government is planning to take legal action against the owners of the ship for compensation.

"If this disaster happened due to negligence, then those responsible should be punished," Sri Lanka’s environment minister Mahinda Amaraweera said, according to the AP.

More on the incident: Burned Container Ship Is Sinking With 330 Tons of Oil On Board

Read This Next
Bad Spill
Scientist Warns That a Huge Tanker Is Probably Going to Spill a Million Barrels of Oil Into the Ocean
Futurism
A New Reusable Sponge Can Absorb 90 Times Its Weight in Oil
Futurism
The Largest Spill in 7 Years: Iowa Pipeline Leaks 138,000 Gallons of Fuel
Futurism
Called It. 176,000 Gallons of Oil Spilled 150 Miles From Standing Rock Protests
Futurism
Thousands Of "Small" Oil Spills Are Destroying the Gulf of Mexico
More on Earth & Energy
Rock Battery
Jan 28 on the byte
Researchers Successfully Turn Abandoned Oil Well Into Giant Geothermal Battery
Do The Worm
Jan 27 on the byte
Scientists Name "Funky Worm" Amphibian After a Weird 70s Funk Song
Cow Chow
Jan 26 on the byte
Bill Gates Gives $12 Million to Flatulent Australian Cows
READ MORE STORIES ABOUT / Earth & Energy
Keep up.
Subscribe to our daily newsletter to keep in touch with the subjects shaping our future.
+Social+Newsletter
TopicsAbout UsContact Us
Copyright ©, Camden Media Inc All Rights Reserved. See our User Agreement, Privacy Policy and Data Use Policy. The material on this site may not be reproduced, distributed, transmitted, cached or otherwise used, except with prior written permission of Futurism. Articles may contain affiliate links which enable us to share in the revenue of any purchases made.
Fonts by Typekit and Monotype.