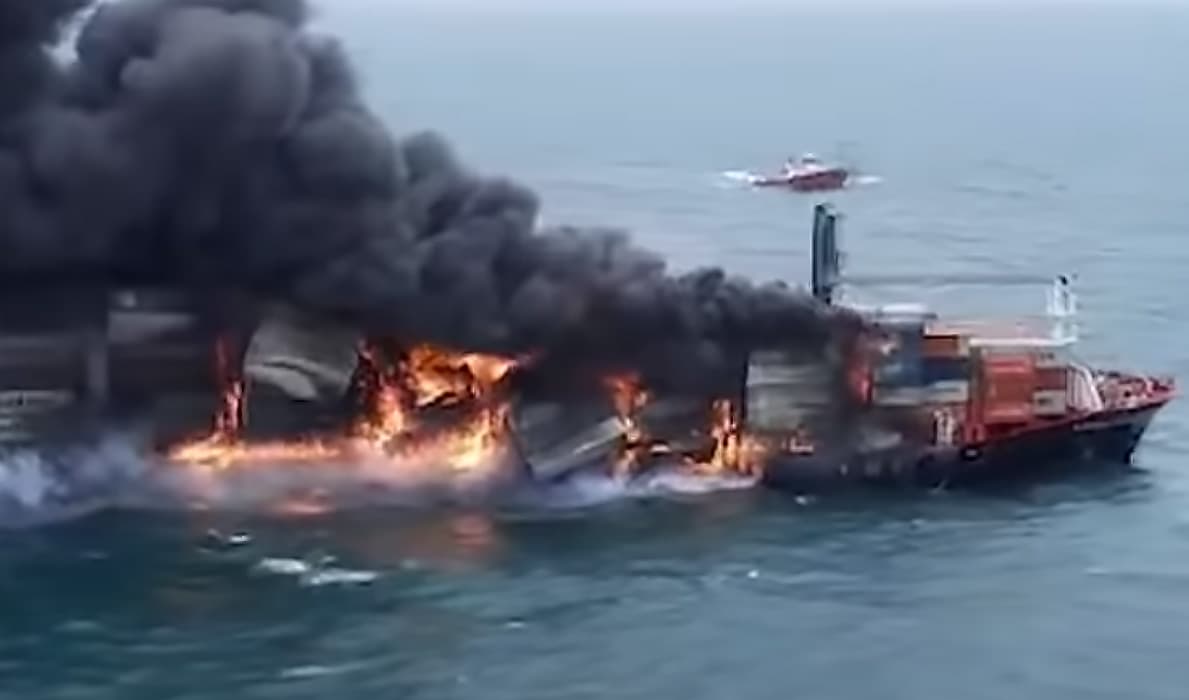 Luckily, the crew was evacuated.

Luckily, the crew was evacuated.

The vessel, called MV X-Press Pearl, was waiting to enter its port before a fire erupted on board four days ago, according to the Sri Lankan navy.

The navy believes the ensuing explosion was caused by chemicals on board, which included 25 tons of nitric acid — another reminder, after a separate vessel blocked the Suez Canal earlier this year, of the vulnerability of the massive container ships that power much of global trade.

The MV X-Press Pearl off the coast of Colombo #Colombo #SriLanka #lka pic.twitter.com/paTKB71U84

Five tugboats were already trying to battle a fire when the explosion occurred. A Sri Lankan Navy ship was also anchored nearby to assist, according to Al Jazeera.

25 crew members from countries including including the Philippines, China, India and Russia were evacuated following the explosion. Several of the 1,486 containers the boat was carrying tumbled into the ocean.

"The fire has been spreading fast since morning and has spread towards the control room, while some 20 of the containers have fallen overboard," Sri Lankan Navy spokesman Indika Silva said, as quoted by the Australian Associated Press (AAP).

Experts are now surveying the ship, with India promising to send help as well in the form of both rescue ships and aircraft to battle the blazing flames.

"A special Dutch flight with vital equipment to contain the fire is now expected to reach Sri Lanka," Sri Lanka's shipping minister Rohitha Abeygunawardena said in a statement, as quoted by Reuters.

The extent of the environmental toll of the explosion is still unclear.

"We already have reports that some of the fuel from the engine room has leaked from the ship into sea," said Dharshani Lahandapura, chair of the Marine Environment Protection Authority, a Sri Lankan government body to protect marine waters from pollution, as quoted by AAP.

"We are in the process of carrying out investigations to determine the extent of pollution," she added.

More on container ships: Watch the Amazing Moment as the Giant Ship Finally Gets Unstuck

Mo' Containers, Mo' Spills
Sinking Ship Full of Chemicals and Oil Threatens Horrifying Environmental Disaster
6. 3. 21
Read More
Pollution From Ships is Causing Lightning Storms Over Ocean Shipping Lanes
9. 28. 17
Read More
Tesla Must Overcome Local Production Laws Before Bringing EVs to India
9. 18. 17
Read More
+Social+Newsletter
TopicsAbout UsContact Us
Copyright ©, Camden Media Inc All Rights Reserved. See our User Agreement, Privacy Policy and Data Use Policy. The material on this site may not be reproduced, distributed, transmitted, cached or otherwise used, except with prior written permission of Futurism. Articles may contain affiliate links which enable us to share in the revenue of any purchases made.
Fonts by Typekit and Monotype.